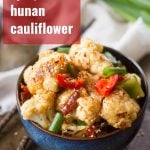 Cauliflower florets are roasted until tender and tossed in spicy sauce with chunks of bell peppers to create this healthy and flavorful Hunan cauliflower.

Remember when I stole the idea for my sesame sriracha tofu idea from Wegmans? Well I did the same thing with this recipe. Actually, I got both ideas on the same trip. I was really hungry that day, and apparently indecisive as well. I grabbed a scoop of both dishes out of the vegetarian buffet and decided both would eventually be recreated in my kitchen. I guess I figured I'd be slick and space the posts way apart so nobody would notice, but I'm not the slickest.

So, on that particular hungry trip to the supermarket, I kind of had to give the Hunan cauliflower a try. I've seen Hunan chicken on a million different restaurant menus, but I've never tried Hunan anything. I guess I was waiting around for a vegan version of Hunan chicken to pop up on a Chinese vegetarian menu at some point, but it hasn't happened yet. Given my limited experience with this particular type of dish, I decided to just recreate exactly what I ate, to the best of my ability. And I did a pretty darn good job.

Savory, spicy, and a little bit gingery is how I'd describe the sauce. I considered doing batter coated baked cauliflower like I did for my sticky sesame cauliflower, but I've gathered from reader comments that some of you have trouble with that one, so I decided to keep things simple. Cauliflower gets tossed in cornstarch and roasted while the sauce simmers with some bell peppers. Once the cauliflower is done, douse it in the sauce and serve everything up with rice.

The sauce is delicious and would be excellent on all kinds of veggies, or even tofu, so feel free to experiment if you're not feeling the cauliflower. 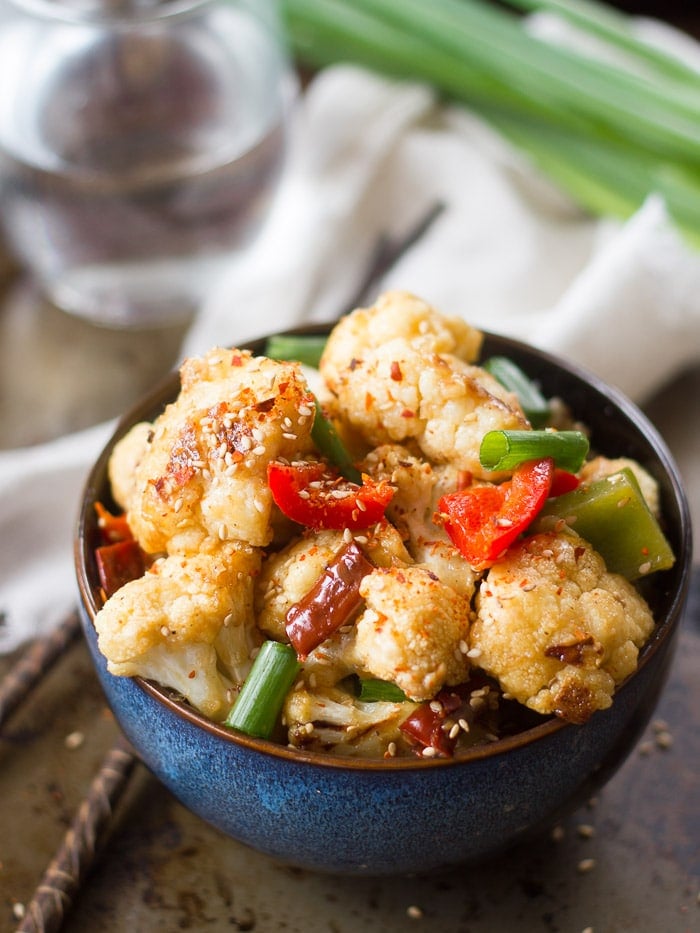