This creamy bean soup cooks up hands-free in the slow cooker and gets topped with a sprinkling of smoky tempeh bacon.

You have my husband to thank for this one. After living together for five years I thought I'd squeezed every vegan recipe idea possible out of the guy. (I have a regular practice of grilling everyone I know for recipe ideas.) Then one day he comes out with vegan bean with bacon soup. A childhood favorite he tells me. Sounded good to me!

I don't think I've ever actually had bean with bacon soup, but it seemed pretty straightforward. And so this vegan version is pretty basic, but it's definitely one of those super cozy and comforting simple meals. He took one bite and was like "Yup! That's bean with bacon soup all right!"

I decided this would be a good one for the slow cooker, so I went all out, started with some dried beans, and let the soup simmer away all day. I think my lasagna soup from last year pretty much sold me on the slow cooker, so these days I'm constantly looking for reasons to use it. Beany soup that requires a long simmer anyway is perfect slow cooker material, so I threw everything in and let the machine do it's thing.

The bacon part of this soup does not cook in the slow cooker. All the smoky flavor would probably just run right out of it. That's okay though! It sill works, because while the soup cooks away, you can let the tempeh bacon marinate. Once the marinating is done, it cooks up super quick in a skillet, so no big deal right? I think you'll find the result to be delicious and well worth the extra five minute investment. ;) 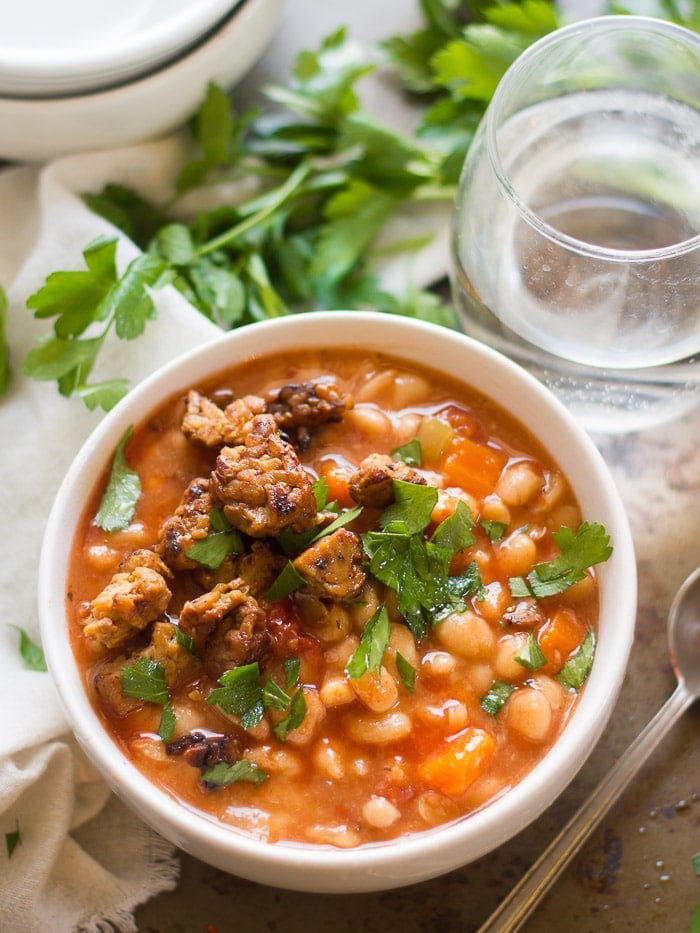 For even more smoky flavor, add a few dashes of liquid smoke to the soup while it simmers.