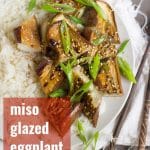 Roasted Japanese eggplant halves are slathered in umami-packed miso sauce, broiled until golden and served up with sesame seeds and scallions to make this melt-in-your mouth miso glazed eggplant.

This is just about the easiest thing ever, and it's so good!

Of course, once I tried it I had to go home and reverse-engineer the dish. It wasn't too tough though; the flavors are super simple, but they work amazingly together. Part of me was itching to throw in some garlic, ginger, hot sauce...I like a lot of flavor in my food, but this time around a little bit went a long way.

Basically here's how it goes: roast up some eggplant. I used Japanese eggplant, which I guess would be in line with the origins of the dish, but I'm sure any old eggplant will work just as well. While the eggplant roasts, mix up the glaze and give it a quick simmer. The glaze was so good that I was eating it out of the saucepan, but then again I'm weird like that. Then, when the eggplant is all nice and tender, brush on the glaze and stick it under the broiler, so you get some of those nice dark spots.

You can really serve it however you like, even on a salad. I just ate mine plain, with a side of rice. 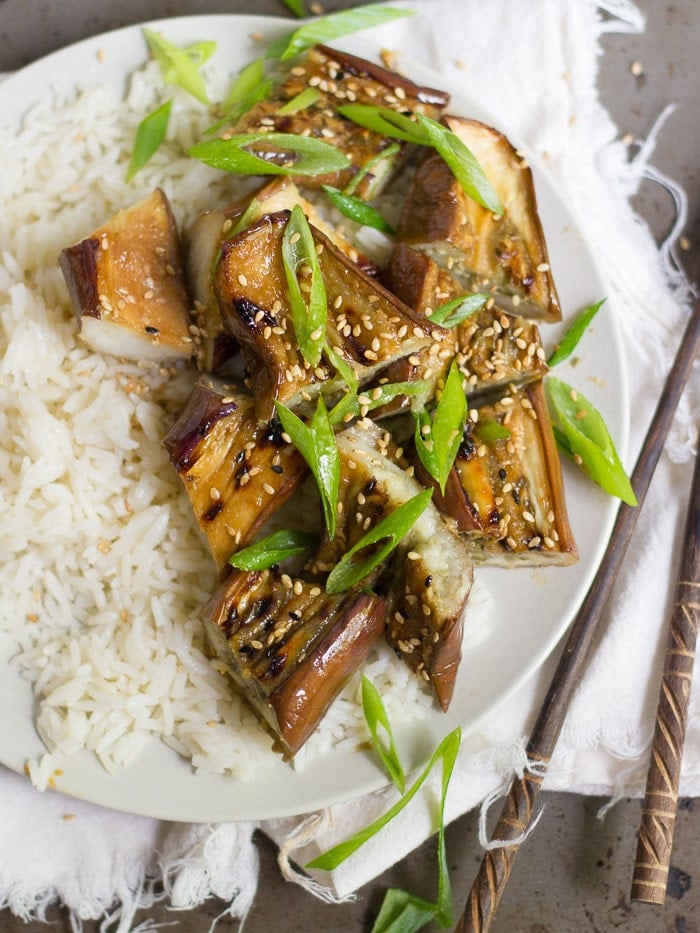 If you substitute a larger variety of eggplant, like Italian, I'd suggest cutting it into thick slabs (2 to 3 inches thick). If your eggplant is a bit brown on the inside or has been hanging around for a while, you may need to salt it to get rid of any bitterness that has developed. After cutting the eggplant, place the halves into a colander and sprinkle generously with salt. Allow to sit for about 30 minutes. Rinse thoroughly, pat dry, and proceed with the recipe.