Juicy chunks of sugar pumpkin are simmered in tomato sauce with spices, then served over basmati rice with cashew cream to make this Afghan-inspired pumpkin stew!

Things have changed quite a bit since I went vegetarian back in the early nineties. I was thirteen years old and living in suburban southeastern Pennsylvania at the time. There was a health food store a few miles away, which I found a little intimidating at the time, and maybe a few Chinese buffets nearby where I could get some rice and vegetables (no tofu to be found). So I basically subsisted on mostly salad and bagels until early adulthood. Early adulthood would be when I moved to Philadelphia, and this was about when I discovered that other cultures weren't quite as meat-centric in their eating habits as us Americans. I had so much fun. It became almost a hobby to pop into restaurants offering different global cuisines just to see what they had to offer. Most of the time I was rewarded with ample plant-based choices. (Asian, African, Mediterranean.) Other times, not so much luck. (Eastern Europe didn't have much for me.) In any event, it was always an adventure!

One particular stretch offered lots of global options, all lined up in a nice little array spanning several blocks in center city. I tried them out one by one. When I got to the Afghan place, I had absolutely no idea what to expect, but as it turned out, they had tons of delicious sounding vegetarian options. In the spirit of exploration, I ordered a pumpkin stew, which I thought seemed a little odd (and therefore intriguing) as a dinner choice. It was amazing. Sweet, savory and just a little spicy. I still make it back to that place every so often for the pumpkin (kaddo borani, or something like that, if you're ever searching for it on a menu).

I guess I liked my Afghan pumpkin so much that it put a damper on the whole exploration thing, because I've been unable to order any other dishes in that restaurant. I later discovered that pumpkin stew is a pretty popular dish in Afghanistan, and have ordered it the few other Afghan restaurants I've had the chance to try out.

I finally got around to creating my own vegan version of Afghan pumpkin. Trader Joe's had these adorable little sugar pumpkins that I just couldn't resist. I flavored the dish according to what spices I thought I could taste in the restaurant version, so I'm not sure as to the authenticity, but I can promise that it's delicious. If you want to give this a try when pumpkin isn't in season, you should be okay subbing butternut squash.

This post first published on Connoisseurus Veg on October 14, 2013. 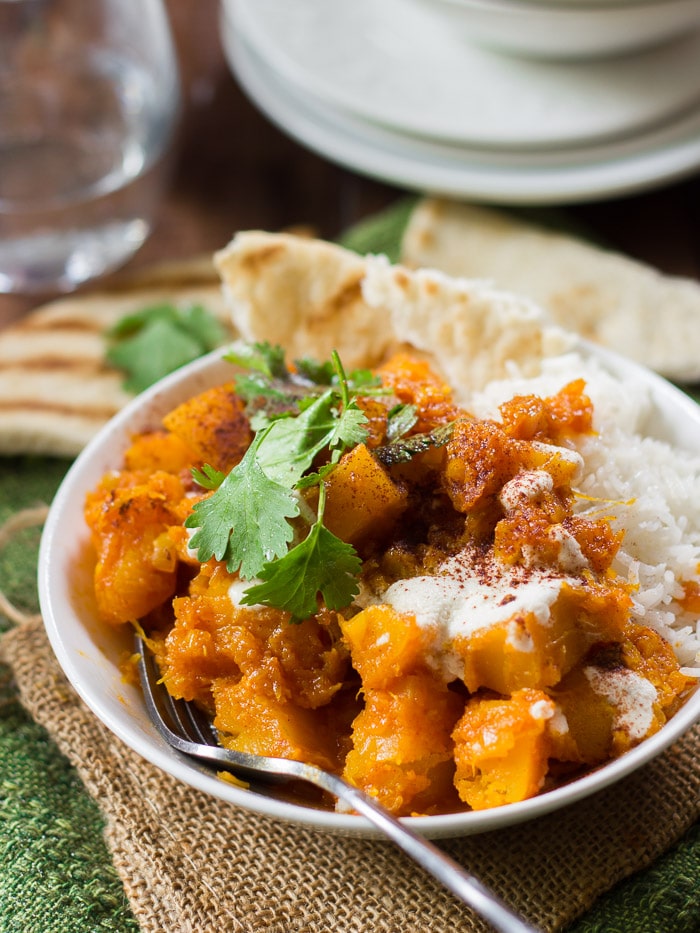 I remade this recipe three years after originally posting, in order to reshoot the photos, and I felt like the spices were a bit off, so they've been updated in the ingredients list. If you made the original version and loved it, it called for 1 tablespoon turmeric, 1 teaspoon cumin and ½ teaspoon cinnamon.