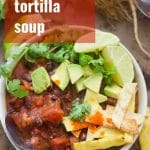 This hearty vegan tortilla soup is made with spicy simmered black beans and poblano peppers, served with a topping of avocado chunks and crispy tortilla strips. 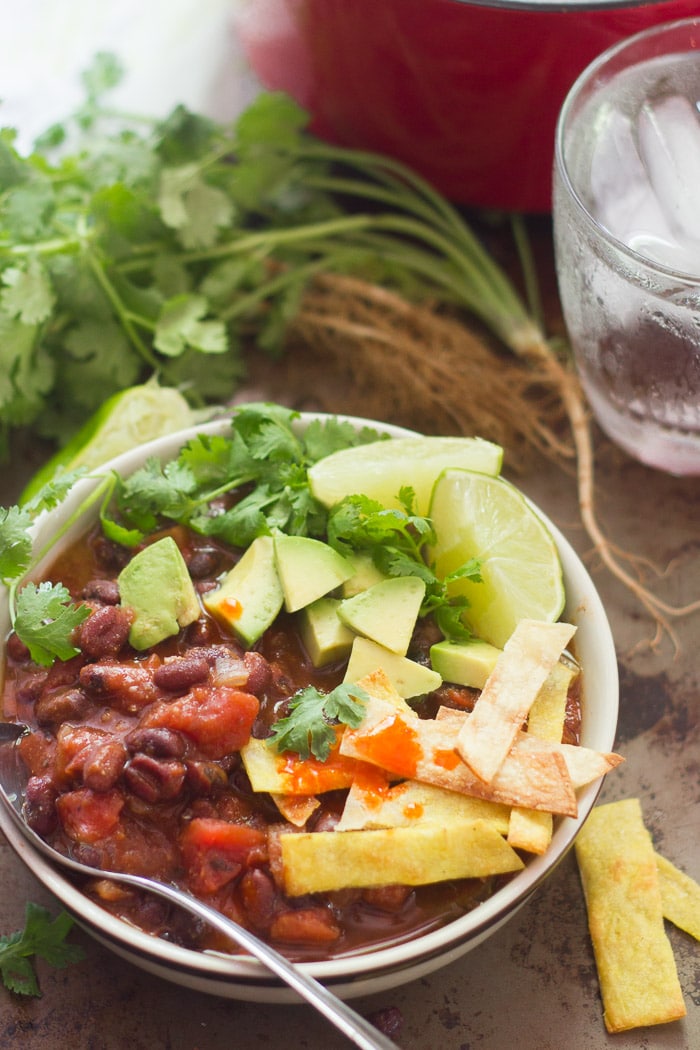 I won’t keep you in suspense: the two ways to make this vegan tortilla soup are (1) with beer and (2) without beer. I didn’t intend to make this a two ways post but while the soup was cooking I got inspired by a stray bottle of beer in the fridge, so I went and dumped it into the pot. Best idea ever! 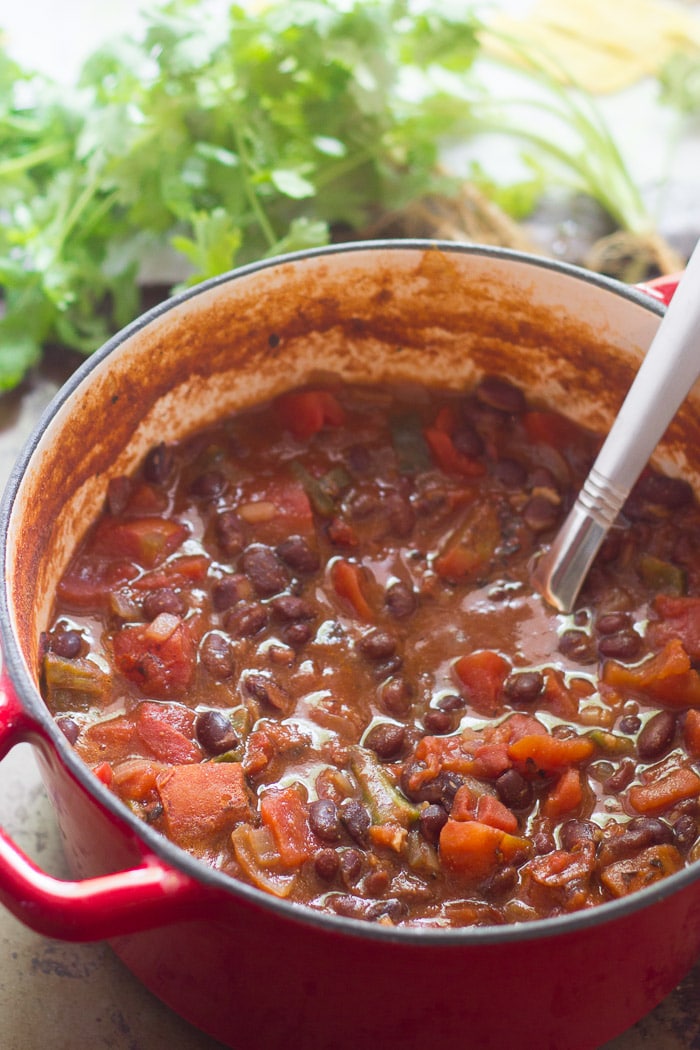 So why the two ways? Why not just vegan tortilla soup with beer? Because I know if I just post that recipe I’ll get a million questions on how to make it without the beer.

I know there are always a few people concerned about even a small amount of alcohol consumption, and while I can’t promise that every last trace of it cooks off, I’ll say this: if anyone were likely to get drunk off of soup it would be my husband and me. I don’t think either of us has had a full-sized drink in at least five years. Every now and then (like maybe annually) my husband will decide to crack open a beer from my cooking stash and drink, at most, about a third of it with dinner. After dinner we’ll watch a show like the X-Files, and I never have a clue what happened during that episode due to the constant laughing and enthusiastic cheering for Mulder and Scully. And, well, nothing like that has ever happened to either of us after eating food with beer in it. 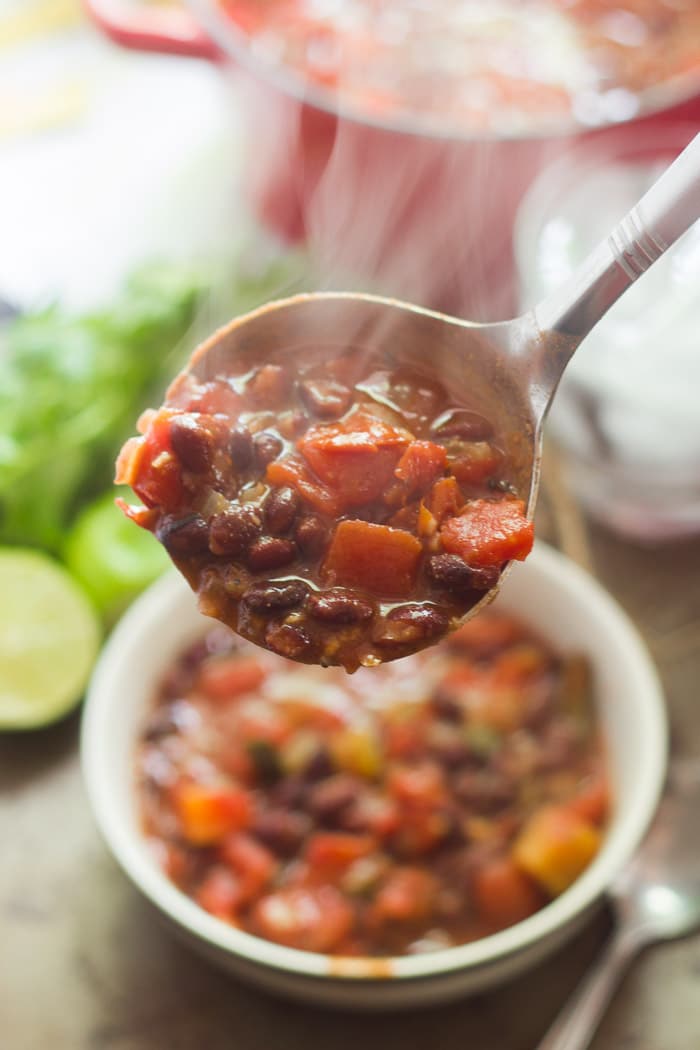 So I really recommend making version 1 of this soup, with the beer. It adds so much flavor, and if you’re me or my husband, not even a lick of drunken behavior. We were both perfectly civilized during our post-tortilla soup episode of iZombie. 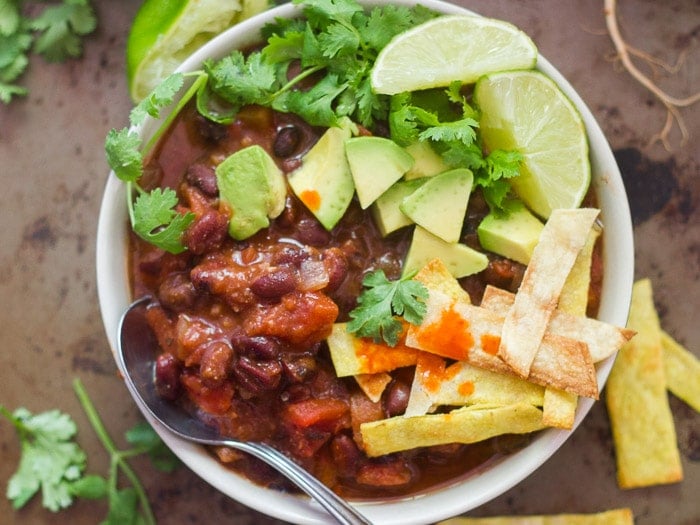 So have I sold you on the beer thing? I guess it’s okay if I haven’t — the soup will be tasty either way! You can’t really go wrong with spicy black bean soup and crispy tortilla strips. This stuff is kind of like chili, kind of like black bean soup, but not quite either. I’ve been meaning to do a vegan spin on tortilla soup forever, but it seems I always get distracted. That’s how we ended up with black bean tortilla soup this time around, and I couldn’t be happier about the result. It was delicious. (Especially the beer version! Make the beer version. Okay, I’m done.) 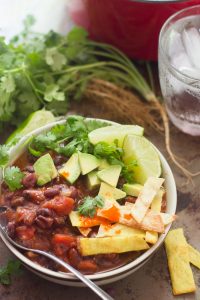 For the Tortilla Strips

If you want to try a different kind of beer, go for it. Normally I'd probably go with something darker than ale for something with black beans and tomatoes, but the ale worked surprisingly well.