As I was photographing this it occurred to me that it's not much of a fall recipe. This pizza is so green! And bursting with herbs and veggies! Where's the squash? The apples? Cinnamon?

But then it occurred to me that Halloween and Thanksgiving aren't the only big fall things that people plan their food around. It's football season, right? I think so, and even though I don't watch football, I do happen to love football season, mainly for the food, although the clear aisles at the supermarket and home depot don't hurt either. One year I even took a road trip to New York during a big game and it was smooth sailing. So hooray for football!

This recipe combines two of everyone's football munching favorites: pizza and artichoke spinach dip. I'm sure at some point in my lifetime I sat through a football game for at least one of those foods. These days though, I avoid both for the dairy.

Good thing I'm an expert at working around dairy these days!

Spinach artichoke works great as a white pizza, so I went and made this a vegan white pizza, using creamy cashew sauce as my white pizza base. This pie was super creamy, super garlicky, and packed with veggies.

And yes, it tasted like spinach artichoke dip? The cool thing is that you don't even need a bread bowl, since everything gets piled on a crust.

As with most pizzas, you can throw some additional toppings on this if you like. I seriously debated including some sautéed mushrooms or black olives, both of which would be excellent I'm sure. I ended up going with roasted red peppers because I had some on hand, and they add a nice burst of color. 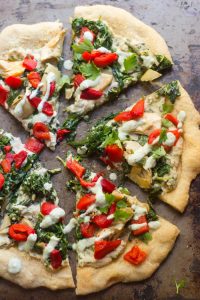