Have any of you guys worked in food service? If you have, you know it can be pretty nasty business. For example, you know those fancy looking dessert trays that the servers use to sell you sweet after dinner treats? They're disgusting. At least in places where I worked, they were loaded not with fake desserts, nor fresh new slices of everything on a daily basis. No, usually the desserts on those trays hung out until they started to disintegrate, which can be a pretty long time. On one occasion we had a slow night and the servers at my restaurant of employment got together and decided to bribe a waiter to eat a three week old dessert from the tray. I might have kicked in a fiver. (This was a long time ago. Not my finest moment!)

He picked the tiramisu, which really, was the worst possible choice. All cheesy and dairy-fied three week old dessert. Gross.

So I made a vegan version, which might be marginally less gross at three weeks old. Not that I'm recommending you let these sit around for three weeks! Store these little treats in the fridge for at most a day or two.

That's my story, which really has nothing to do with this dessert, except, tiramisu. This tiramisu though, holy moly. Every now and then I make something expecting it to be good, only to have it turn out to be just about the best thing I've ever tasted. Seriously, this was that good!

The best part about this take on tiramisu is that it's so easy, it feels like cheating. When I first got the idea to do a vegan pumpkin tiramisu I figured I'd be baking up my own ladyfingers, which normally make up the cookie part of the dessert, but then I remembered how great pumpkin and gingersnaps go together, and vegan pumpkin gingersnap tiramisu was born. 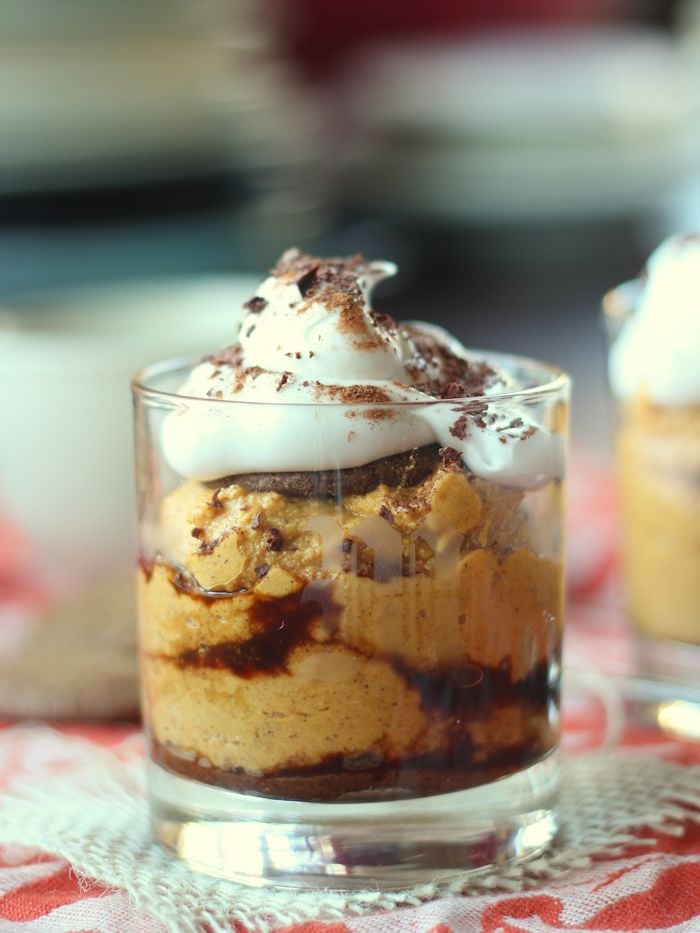 For the Pumpkin Cream Layers

For the Gingersnap Layers

You can buy canned coconut cream at Trader Joe's. Alternatively, refrigerate a can of coconut milk overnight. The day of serving, open the can and drain off the liquid part, reserving the solids. The solids are the coconut cream you'll want to use for this recipe.
*Use whatever coconut cream is left in the can after making your pumpkin filling.