This vegan coffee cake is rich, crumbly, flavored with a hint of lemon, and layered with a filling of juicy blueberries.

It's now officially spring, and I'm all about springy flavors. This time it's lemon and blueberries. Also, I'm into sweet stuff. Maybe not the over-the-top rich fudgy treats I'm into over the holidays, but springy sweet stuff. Things you can eat for brunch. Socially acceptable dessert for breakfast.

It was high time I created a vegan coffee cake. I'll be honest: coffee cake was never my favorite. I feel like there's always more exciting desserts you can eat for breakfast. This coffee cake though, is my favorite. I'd take it over a big piece of chocolate cake, and that's saying a lot.

Now, this is a cake, so it's certainly indulgent, but it has a few things going for it over conventional coffee cake. It's vegan. Also, see how it's a little darker in hue than a normal coffee cake? That's because I made it with whole wheat pastry flour and coconut sugar. These ingredients don't affect the taste or texture, I promise. Instead of butter, or as would be the case in my kitchen, vegan butter, I made this coffee cake with a mix of coconut oil and almond butter. I wouldn't have it any other way, because the texture was fantastic. And finally, to moisten up the batter, I went with non-dairy milk.

Everything gets topped off with an oat crumble an a drizzle of lemon glaze. The cake turned out delicious, and incredibly springy. I'm sure I'll be enjoying this one at brunches all season long. 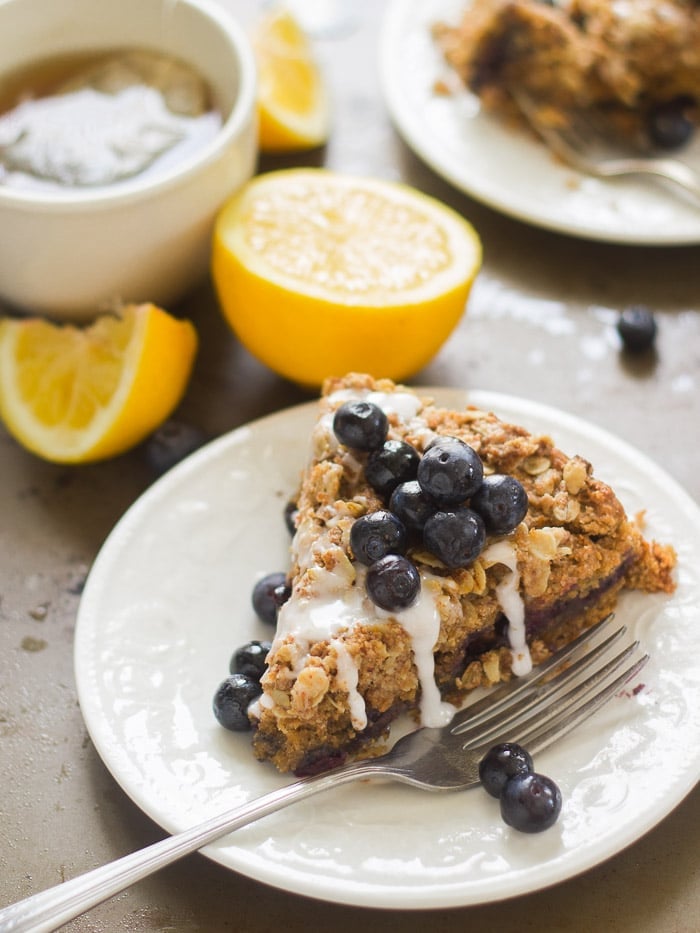 For the Streusel Topping

For the Vegan Coffee Cake