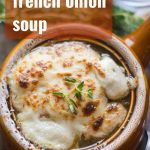 There was a time when I thought this couldn't be done, or at least it couldn't be done well and without the use of store-bought vegan cheese, which I try to reserve for those occasions when I'm totally desperate. .

Well, I've learned a bit about vegan cheese over the years spent creating this blog and I was able to come up with a homemade solution that actually works!

I actually tried out a bunch of variations on this recipe and I think what I came up with is the best vegan French onion soup ever.

See, initially I thought I'd do something totally different with the cheese. When I made this lasagna I was pretty impressed at how well the bechamel sauce browned on top but stayed gooey and creamy underneath, and I thought I could make a version of that that worked pretty convincingly as a vegan cheese.

But when I got down to it I had doubts, so I did a side by side smackdown comparison of the bechamel versus vegan cheese with tapioca starch. The tapioca won, big time. And by tweaking the recipe a bit I was able to come up with a cheese that browned nicely but had just the right level of gooeyness. See how good it looks? It tastes just as good!

I've also perfected my basic onion soup recipe: even though the whole cheese thing held me back for a while, I have been making basic cheese-free onion soup here and there, and the recipe has improved and evolved over time. My old recipe used white wine (which is great in a pinch), but red gives it that robustness you thought you could only get in onion soup made with beef broth. Soy sauce intensifies the flavor.

Oh and as for the onions, I recommend caramelizing the heck out of them. I sometimes cheat and crank the burner up to medium (which cuts the cook-time down by half or more), but keeping it in the low to medium low range will give you some intensely savory caramely flavor. It's so worth it. 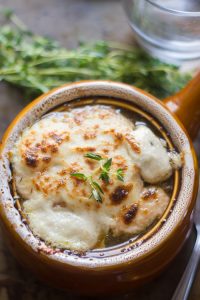 For the Cashew Cheese

If you're using a large blending device you may want to double the cheese portion of the recipe and freeze half for later.