The last time I ate any significant amount of meat, it was in the form of sausage, on a pizza. Complete accident. I was probably about fifteen and still a relatively new vegetarian. The pizza was supposed to be plain, but it wasn't. The sausage was mixed in with the sauce, which was under the cheese, and therefore not easily detectable. It wasn't until I'd finished an entire slice that my dad started on his and pointed out that there was crumbled up sausage buried in there.

Ah, well. It happens, as anyone whose been vegetarian for any extended period of time will tell you.

After that experience I moved on to almost exclusively eating tomato pie. It felt safer (as far as accidental meat consumption is concerned) and healthier. While I still enjoy tomato pie, and still think of it as healthier than a big cheese smothered slice, I do notice a bit of a carbo crash if I try to make a meal out of it.

This spinach and lentil pizza was my attempt to balance out the old vegan tomato pie a bit. It's also how I used my red pepper lentil Bolognese sauce that I shared the other day.

My last vegan pizza recipe was pretty well received, and since I had some dough leftover, I thought I'd share anther one. Lentils and spinach on a pizza might not be as sexy as the creamy vegan ricotta featured in my last pie, but this was no less delicious and satisfying. Also, this one has cashew parmesan, so that's kind of sexy, right?

What I love about both of these pizzas is that you don't have to actually bake them. If you're making your own crust, you bake the dough (important!), but aside from that, you just throw your toppings on the pie and eat. What this means is that the pizza only takes about as much time to come together as your toppings take to make, which in this case isn't much. If you make your cashew Parmesan while your sauce simmers, this pie can come together just as quickly as the sauce, which is just about 25 minutes. 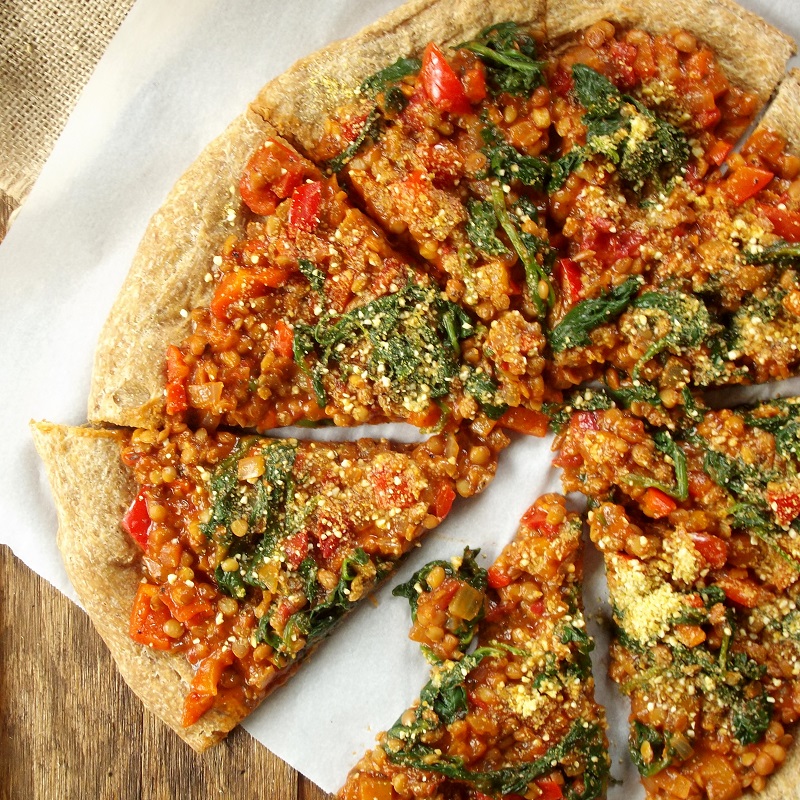 For the Spinach & Lentil Tomato Pie

For the Cashew Parmesan