This spicy eggplant sushi is made with tender eggplant strips that are pan-fried in garlic and chili paste and rolled up with sushi rice and nori.

So continues my unending quest to stuff every plant-based item of food in existence into a sushi roll. So far I haven't gone wrong.

For the last few weeks I've been able to harvest about an eggplant or two a week from the garden. Initially I wasn't sure it was such a good idea to plant two eggplant plants, thinking I'd be overrun with eggplant, but now I'm glad I did. Those eggplants that go straight from the garden and into a recipe are by far the tastiest I've ever had.

So, you can expect a few eggplant recipes from me in the coming weeks. What better way to get started than with eggplant sushi? When I first decided I was going to try this, the ever popular spicy tuna rolls came to mind. Okay, so I've never actually had a spicy tuna roll, but then again I've never had any kind of sushi that wasn't totally vegan. In fact, I can't even remember what tuna tastes like. (If anyone does, and has any thoughts on whether or not this tastes like a spicy tuna roll, my ears are open.)

Whatever the case, these rolls are really tasty. I dined on them with my boyfriend, who, as I've mentioned on numerous occasions, isn't a big fan of spicy. He loved these. Sniffled his way through the whole batch, and finished with a big "Wow! Delicious!" He also commented that this was about at the top of his spicy threshold, so for those of you that follow the Alissa's boyfriend spicy food scale (which I recognize is becoming a thing), there you have it. Cut back on the chili paste as needed. 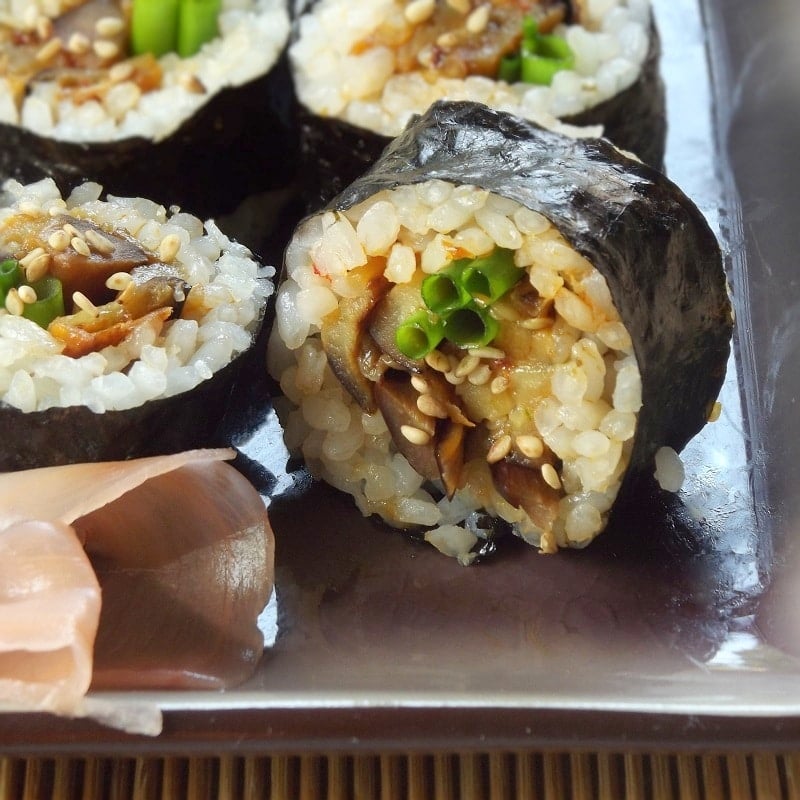 For Finishing and Serving