Easy peasy tacos! Veggies roast in the oven while you whip up a creamy spiced black bean spread to make these absolutely delicious and no-fuss vegan veggie tacos.

I've been sitting on this one for a good two and a half years! I think that's a blog record. Anyway, that has nothing to do with the quality of the recipe itself. In fact, I love these veggie tacos. I planned at one point to put together an e-book of vegan tacos. I eventually scrapped that idea, but not before accumulating a nice collection of taco recipes. I finally decided it's time to start sharing them. And guess what, these were the cover tacos, which mean's they're pretty special.

What I love about these roasted vegetable tacos is how easy they are to throw together. Tacos can be a lot of work, you know? A million different toppings, multiple burners going on the stove. That kind of thing. These are really simple though.

The main filling for these tacos, the veggies, roast in the oven. Super easy: you get to throw a bunch of stuff in a pan, stick it in the oven, and forget about it for a bit.

While the veggies roast, you whip up the creamy black bean spread. This part is super flavorful, creates a nice creamy base for the veggies to squish down in, and doesn't even require any cooking.

By the time your done with the beans, the veggies should be just about ready to come out of the oven. 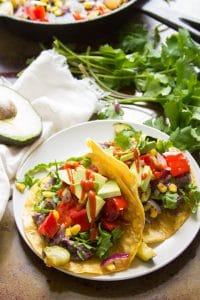 Easy peasy tacos! Veggies roast in the oven while you whip up a creamy spiced black bean spread to make these absolutely delicious and no-fuss vegan veggie tacos.

For the Whipped Black Beans