This post documents my first time ever eating pineapple on pizza. To be honest, I've always found the idea to be a bit strange. "Normal" pizza is made with red sauce and cheese, and those aren't exactly flavors that I want to pair with pineapple. My husband convinced me that pineapple pizza was awesome though, and something I had to blog at some point or another.

I don't know about conventional pineapple pizza, but these little pies were out of this world. Maybe the best pizzas I've ever had. I couldn't get over how good they were! And while I finally consider myself sold on the idea that pineapple on pizza is a good thing, I do think the other seemingly weird stuff I threw into this recipe helped with that.

Since I resigned myself to putting pineapple on pizza, I went a couple of steps further and put tofu and barbecue sauce on there as well. More weird stuff. I've never seen a tofu or barbecue pizza offered at any takeout pizza place. They don't know what they're missing though. I went with hoisin barbecue sauce, because I thought some Asian flavors would go nicely with pineapple and tofu, and holy moly, I was so right.

If you'd rather make a lazy version (and lazy is the whole idea of naan pizza, isn't it?) you can use whatever type of bottled barbecue sauce you've got on hand. 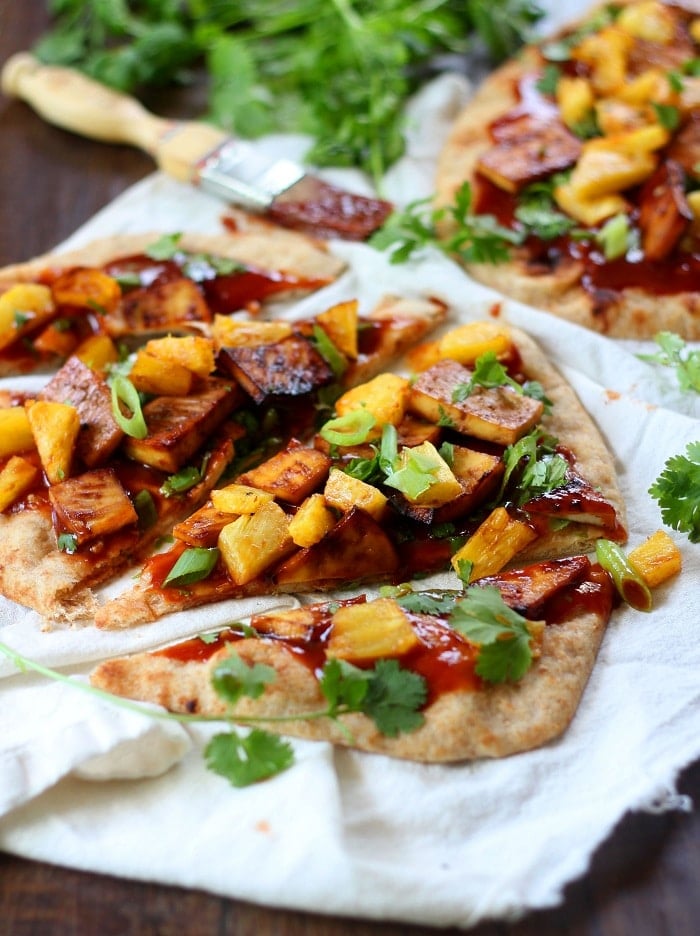 For the Smoky Baked Tofu

For the Baked Pineapple

For the Hoisin Barbecue Sauce

For the Naan Pizzas

Trader Joe's carries vegan naan, though the loaves are a smaller than normal, so I'd suggest using three loaves instead of two. Also check out Indian markets for vegan naan, or make your own - it's easier than you think!.
If can't find vegan naan or prefer to, you can go with a conventional pizza crust. Double the recipes for the toppings and sauce to make 1 large pizza.