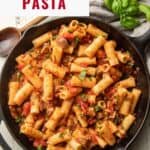 This hearty eggplant pasta is packed with spicy flavor, fresh herbs, juicy tomatoes, and tender chunks of eggplant. A naturally vegan, vegetarian and optionally gluten-free pasta dinner that will please all appetites and is easy enough for a weeknight!

I'm all about pasta dinners. Pretty much always have been! But one thing that's changed over the years: my preferred veggie to pasta ratio has gone way up.

My favorite pasta dishes are filled with veggies. Pasta by itself is great and all, but these days my favorite pasta sauces aren't even really sauces — they're more like mixes of chunky veggies with some interspersed sauce. I was looking for something along those lines when I created this eggplant pasta recipe.

While eggplant, tomatoes and fresh herbs are all in season during summer, they're pretty much available year round these days, so you can enjoy this dish year round if you'd like.

You may or may not need to do this, depending on how fresh your eggplant is.

If your eggplant is very fresh, don't worry about salting it. If it's been hanging around for a while or shows some browning when you cut it open, you'll probably want to salt it to remove some of the bitterness that's developed over time.

To salt your eggplant, just dice it up according to the recipe and place it in a colander. Generously coat it with salt and let it sit for 30 minutes. Then rinse it well (get as much of the salt out as you can) and pat the pieces dry with a kitchen towel.

How this Dish is Made

Tip: You may need to cook your eggplant in batches to avoid crowding the skillet. Taking the time to do this will be worth it!

Tip: I like to start the sauce in a separate skillet while the eggplant cooks, but you also have the option of using the same skillet and cooking the components in succession. It's up to you whether you'd prefer to save time or minimize dirty dishes!

If you prefer to roast your eggplant, simply toss your diced eggplant with olive oil. I recommend using 2 tablespoons, but less will work if you're trying to reduce the fat content. Arrange the eggplant on a baking sheet and roast the pieces for about 15 minutes at 400°F.

Leftover eggplant pasta will keep in a sealed container in the fridge for 3 to 4 days.

Do I need to peel the eggplant?

Nope, but you certainly can if you'd like to. It's really a matter of personal preference. I don't mind skin on my eggplant.

How spicy is this eggplant pasta?

It's about a mild/medium on the spicy scale. For a spicier version, add some extra red pepper flakes. For a milder version, leave them out. 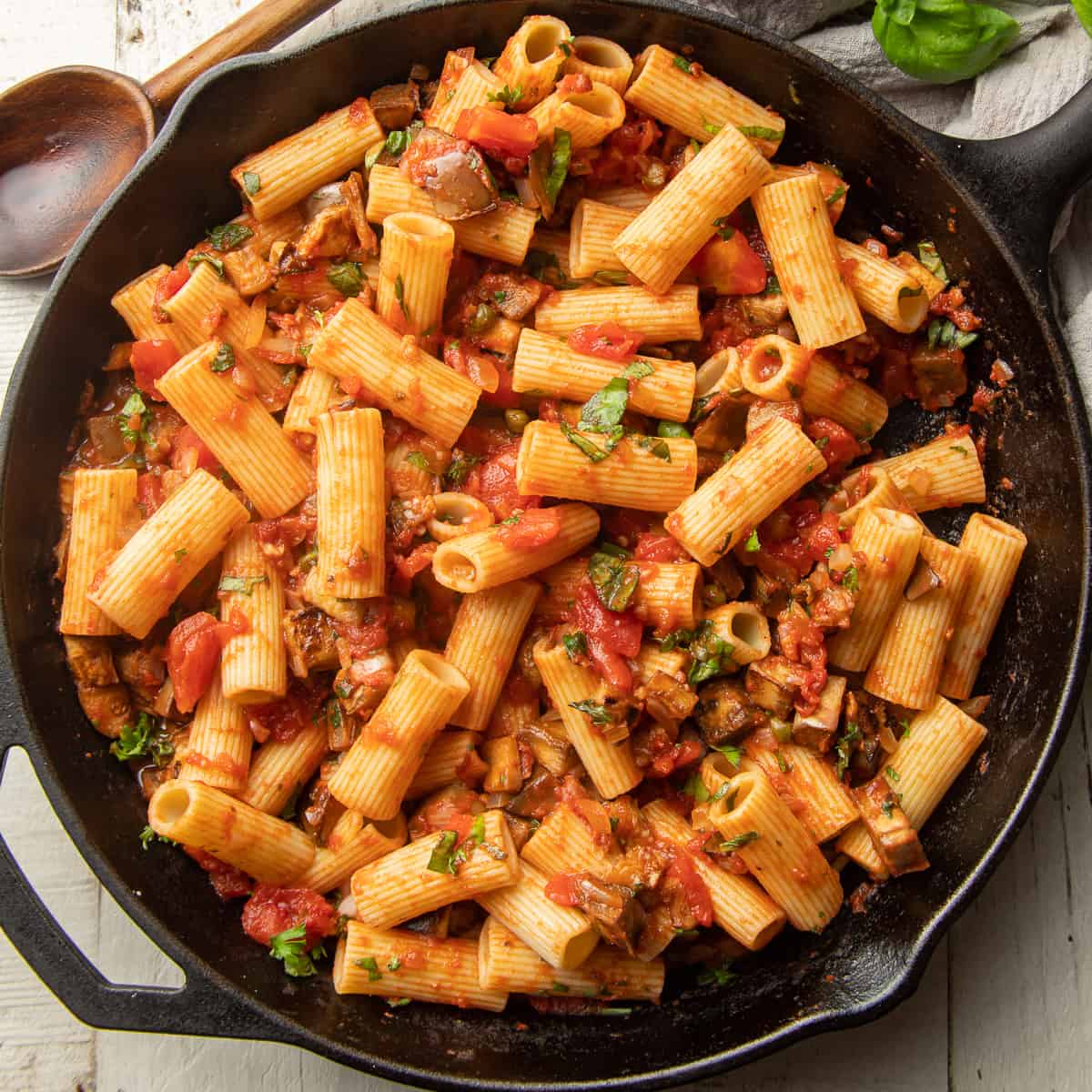 This hearty eggplant pasta is packed with spicy flavor, fresh herbs, juicy tomatoes, and tender chunks of eggplant. A naturally vegan, vegetarian and optionally gluten-free pasta dinner that will please all appetites and is easy enough for a weeknight!