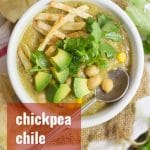 This zesty vegan chile verde is made with chickpeas and tomatillos simmered in a cumin spiced base. Serve it up with some crispy tortilla chips and your favorite toppings!

Ever have a disconnect between a word in it's spelled and pronounced forms? I mean, like when you read something repeatedly, attach a meaning to it, and pronounce it totally wrong in your head? And then you hear people talk about it and you think it's something totally different from that word that you've read a million times? This happens to me all the time! I'm an avid reader too, but I kind of actually think that's to blame. I'm not much of a talker, so I rarely go and mispronounce the word out loud, in which case someone would correct me and I'd realize that tomatillos and tomatillos are the same thing.

Side note: as I was trying to figure out the phonetic pronunciation of "tomatillo." I had to ask my husband "what's something that rhymes with tomatillo." He totally thought I was messing with him.

The funny thing is, this usually happens with food.

The first pronunciation is the correct one, in case you were wondering.

So, tomatillo chile! Also known as chile verde, not to be confused with chili, which would be made with red chili powder instead of a green chile pepper. This stew is made with tomatoes summery green counterpart, so the flavor is light, and quite zippy. A little bit of corn adds some sweetness to balance things out, and cumin is the predominant spice. I used a poblano pepper, which gave my stew just a little bit of heat, but if you like a lot of heat, please go all out and throw in some jalapeños. 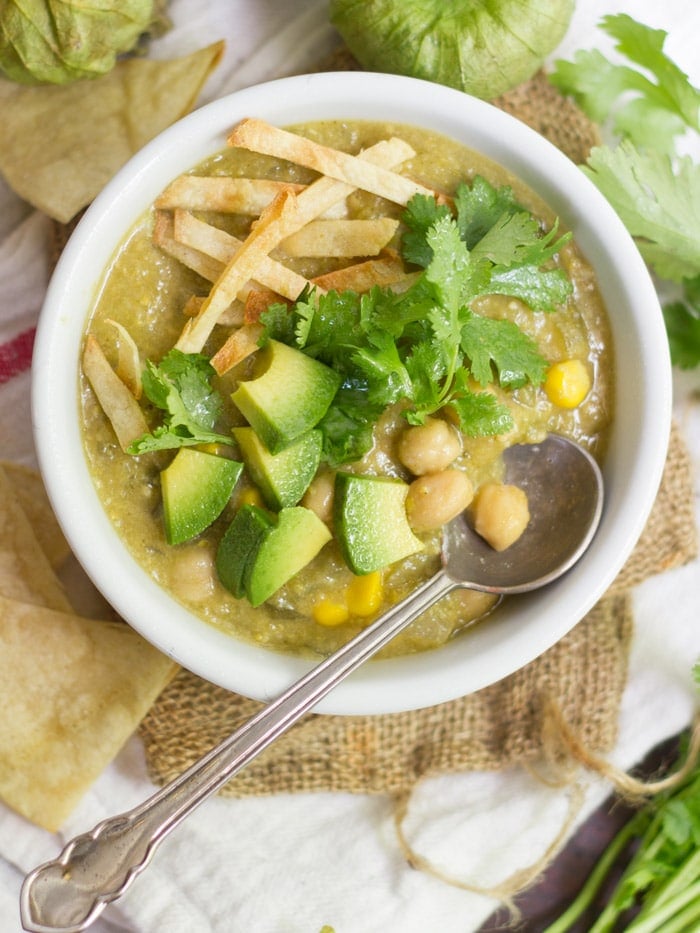 For Serving (pick your favorites)