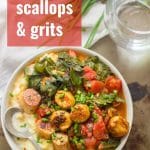 So I thought I'd clear the air, at least with respect to my blog. I give my recipes the names that attract and resonate with the majority of my readers. People just don't do Google searches for "artichoke cakes." Trust me. I want people to visit this site, so I spend a lot of time researching this stuff.

It makes sense too. I never liked meat. I've never had a real crab cake, and as a kid, my meatloaf got hidden under a napkin so I didn't have to eat it. But still, when I'm looking for recipes myself I'll often Google vegan + the closest non-vegan approximation to the type of dish I'm looking for, because I know I'll find results.

Also, I totally get that people miss their old favorite dishes, and that's fine with me. When someone newly vegan has a craving for some chicken nuggets and decides to turn to the internet instead of McDonald's, I want them to get the answer they're looking for.

Okay, so rant over and I'm calling this dish scallops even though it's made of mushrooms! And like the main ingredients of many of my vegan recipes, I've never had a real scallop.

Whether you decide to make this because you're craving scallops or the idea of some spicy mushrooms over grits sounds good to you doesn't matter: they're delicious either way. The mushroom-scallop thing is nothing new — I've seen it done a bunch of times, but I just decided it had to happen after making this vegan calamari a couple of months back.

The mushroom scallops are tender and full of flavor, thanks to some spicy Cajun blackening seasoning. I decided to go total comfort food meal and put everything over some creamy grits. My husband was gifted a bundle of chard from a coworker's garden, so I simmered that up with tomatoes and hot sauce to round things out. Feel free to switch up the greens — if you've got some kale or collards on hand I'm sure they'd be delicious in here.

For the King Oyster Mushroom Scallops

For the Greens and Tomatoes

Make the Greens and Tomatoes

You can substitute about 2 teaspoons of Cajun spice mixture for the spices used in the scallops if you like.