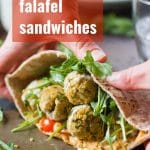 A healthier (but no less delicious) take on falafel! This quinoa falafel is baked instead of fried, and stuffed into pita loaves with creamy hummus and your favorite veggies!

Falafel is one of my favorite foods of all time. Okay, fine, I know I've probably said that about a half a dozen dishes on this blog by now. That's why I say "one of." I've got lots. Falafel is definitely one of my top ten.

The first time I tasted falafel was around 1999 and I thought I'd died and gone to heaven. That happened at a Middle Eastern restaurant located at the intersection of 13th and Pine in Philadelphia, which is sadly no longer there.

Fortunately, by the time I moved into the city in 2002 it was overrun with places where I could get delicious falafel. Amazing how just a few years prior I was totally unaware of the existence of this amazing treat, only later to find an average of four falafel joints located within every one block radius.

The unfortunate consequence of living in falafel paradise for eight years was falafel withdrawal when I finally left the city. I couldn't find falafel anywhere! Oh, I could drive forty-five minutes to some random pizza place out in the country with no clue as to the quality of the falafel I would get, but then why not just drive back into Philly where the good stuff is a guarantee?

I eventually took matters into my own hands. The results were not pleasing. Maybe it was my refusal to include eggs in the recipe. I don't know, but in any event, the texture wasn't quite right, the falafel didn't quite hold together during cooking, you get it.

This falafel is baked instead of fried, which, along with the quinoa, ups the healthiness of this recipe. I dressed my sandwiches with some roasted red pepper hummus, which worked out perfectly. You can use traditional hummus instead, but if you're feel like something extra special, give the red pepper stuff a go. It really compliments the falafel nicely.

One other awesome thing about this recipe: the mixture freezes great! I made a big batch, formed and baked just enough falafel balls to make a couple of sandwiches, then froze the rest for use on a later dinner occasion.

If you want some quick weeknight dinners close at hand, freeze this in portions just the right size to create one sandwich (or multiply by the number of people you typically feed). Bust it out of the freezer in the morning, then roll and bake in the evening. 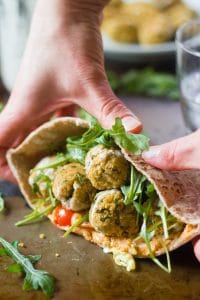 The video above shows me making a double batch!