This hearty winter sweet potato and Brussels sprout stir-fry is cooked up with flavorful, smoky, peppery tempeh and drenched in a tangy orange ginger sauce.

Two years ago I began my first year of working for myself, from home, as a full-time lawyer, part-time blogger. I was so excited, embarking on a new journey during my favorite time of year, that late autumn/early winter time. It was going to be awesome. As luck would have it, I spent the majority of the season sick as a dog. First I got a hideous cold-fever-cough awful sickness thing. Then I gave it to my husband. No sooner had I fully recovered when he, presumably, gave it back to me, probably in some mutated form, because isn't that how it works? Anyway, we went on like that for about two months, and it was miserable. And the whole time I was totally dumbfounded. All this time I'd been spending in schools and offices, and I never get sick. Isolate myself in a home office, and a few weeks later I'm a germ factory.

Anyhow, as I discovered from that little experience, being sick sucks. So now I'm on my toes the moment it starts getting cold out. Was that a sniffle? Is it cold in here? It seems like everyone is sick right now. I really do need to chill out. Being paranoid never helped anyone out. What does help, I'm sure, is not letting my diet go to hell for the holidays. Keep it up with the veggies, the fruit, lots of kombucha, and plenty of citrus.

I think my husband's a bit on edge too, as he went through that the winter of sick in 2013/2014 right with me. He's definitely on a citrus kick anyhow.

So it's high time I created a healthy winter stir-fry, and why not sauce it up with some citrus? That's just what I did!

This turned out delicious, and was maybe the heartiest stir-fry I've ever created. Sweet potatoes and Brussels sprouts aren't my norm for stir-fry veggies, but they worked out great, and were the perfect contrast for each other and my gingery orange sauce. Enjoy this one now. We're right between Thanksgiving and Christmas, so I'll be back soon with more festive food. 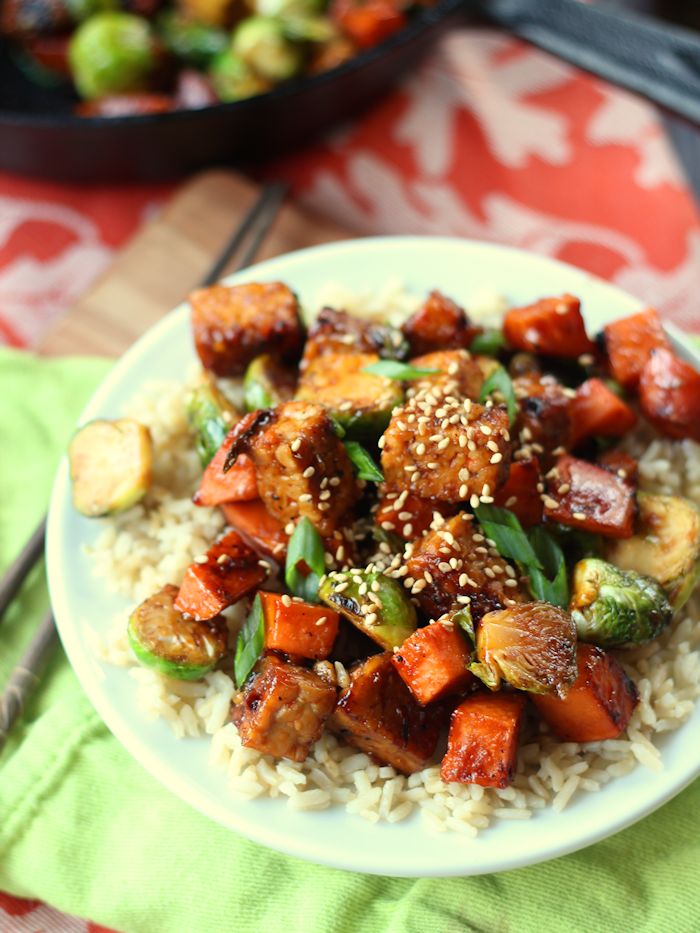 For the Marinated Tempeh

For the Orange-Ginger Sauce

Inspired by this 15-Minute Brussels Sprout & Tempeh Stir-Fry from In Pursuit of More.