This vegan hoppin' John is made with smoky simmered black-eyed peas, spices and chard. Perfect for New Year's, or pretty much any day of the year!

This is an almost conventional version of a New Year's classic. It's cheap and healthy and I didn't even have to break tradition all that much to make it that way.

I first learned of this dish a few years back from a friend who had gotten in the habit of preparing a big pot of the stuff on New Year's day. I'd never heard of the dish before, but now I know that it's kind of a New Year's day tradition in lots of homes in the U.S.

Her version was meatless, and I think totally vegan, though I never got around to confirming or trying it.

When I decided to make up a batch of my own, I found a bunch of recipes that called for ham or bacon. It seems like that's a popular ingredient in most versions of the dish. I decided to include only my favorite part of bacon, the smoke, which comes conveniently bottled and in totally vegan form. I also threw in some chard, to flavor and healthy things up a bit, and also to add some variety as a stand in for collards, which I understand are another optional ingredient in more traditional versions.

On a side note, the idea behind the dish is frugality — eat cheap on New Year's, be blessed with abundance for the next twelve months, so I'm thinking the whole optional ingredients thing supports that.

I've eaten this hoppin' John a bunch of times over both rice (traditional) and quinoa (not so traditional). Either way, it's super delicious and satisfying.

This recipe makes a big batch. It's also super easy to throw together. So it's perfect in all kinds of ways if you've got a New Year's crowd to feed. 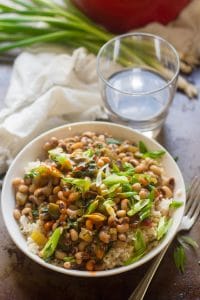 This vegan hoppin' John is made with smoky simmered black-eyed peas, spices and chard. Perfect for New Year's, or pretty much any day of the year!

Nutrition information does not include rice or quinoa.