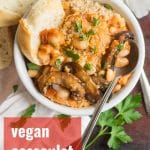 This vegan cassoulet is made with a savory slow cooked stew of garlicky white beans and smoky portobello mushrooms, sprinkled with panko breadcrumbs and baked to bubbly perfection.

Cassoulet is an exception. No cheese! This is pretty exciting, especially when you consider that it's also French, because French food can be pretty cheese-heavy.

What traditional cassoulet does have is gobs and gobs of super slow cooked garlicky white beans and herbs, all topped with a crispy breadcrumb crust. So it kind of makes sense that vegan cassoulet would work out well when you think about it: white beans cook up super creamy and luscious, so who needs cheese?

The other thing traditional cassoulet has is meat. Lots of it. I perused a number of cassoulet recipes, and even though there are lots of variations on the dish, they generally seem to involve multiple types of meat and animal fat, and all kinds of involved ways of cooking the meat in the animal fat. So it can be a pretty complicated dish. The great thing about making a vegan cassoulet it is that you can just throw all that stuff out the window, and the recipe ends up being a lot simpler.

In place of all the eight hundred varieties of meat one might include in a dish like this, I went with just substitution: smoky sautéed portobello mushrooms. They were everything I needed, and so delicious.

I'm not going to kid you and say this dish is quick and easy...but it is at least relatively easy. Most of the long cook time is hands off — simmering stew on the stove or baking up the casserole in the oven. I did go the extra mile and make this from dried beans, as opposed to canned, which means soaking, and that's something I'm normally too lazy to do. I feel like canned beans would get mushy with the long cook time. Also, if you want to make this during the week (and Valentine's day is on a Tuesday this year, so you should!), just cook the stew in advance. Stick it in the fridge for up to two days. The day of serving, just transfer it to the baking dish, sprinkle with breadcrumbs, and bake away. 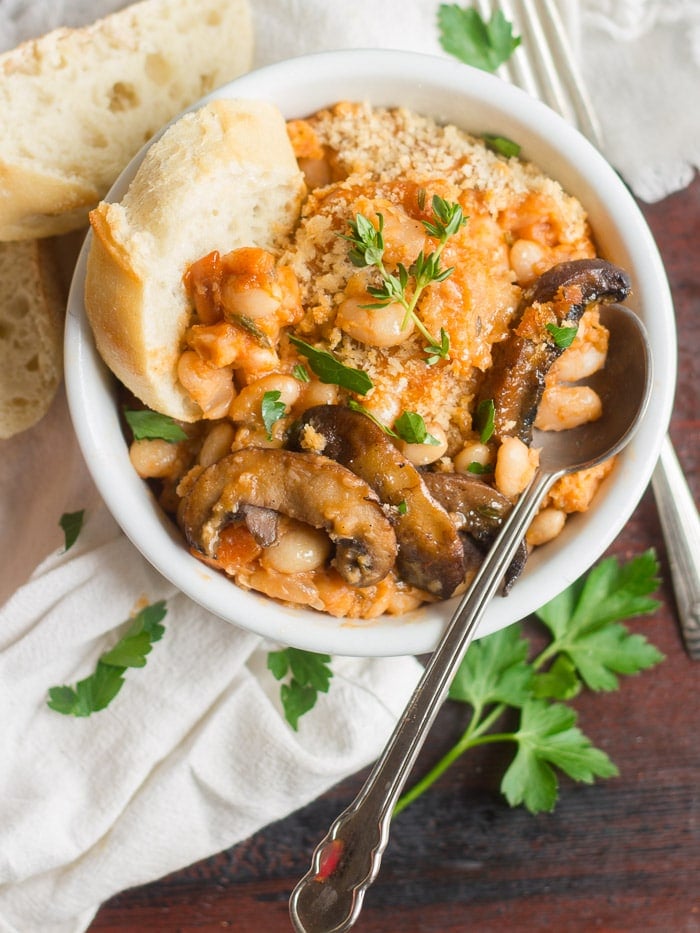 I used a 2 quart casserole dish for this, and while everything fit, it was a tight squeeze, so use something a tad larger if you've got it.