This curried lentil sweet potato soup is rich, flavorful, and requires about ten minutes of prep, followed by hours of gloriously fragrant simmering away in the slow cooker.

This recipe did it for me. I will be using a lot more of my slow cooker this year.

Up until now I haven't nearly used this thing enough. It was a Christmas gift from my mom, I don't even know how many years ago. I always thought of it as one of those nice-to-have items, but by no means a necessity. I also kind of thought I'd be sacrificing something by making meals in it. Because, you know, anything that's so easy as to only involve throwing a bunch of stuff into one vessel and letting it do its thing can't be all that great, right?

I'm happy to say that no sacrifices were made for this lentil sweet potato soup. Yes, pretty much everything went right into the slow cooker at once, around lunchtime. The house smelled glorious all afternoon, and by dinnertime, all that was required of me was about two additional minutes of prep work and some ladling.

Oh, and there's another great thing about the slow cooker, and this is pretty specific to this soup. Normally when I make a soup like this, as in a thick and hearty legume based one, I'll tell you it's better the second day. That would be because the legumes continue to suck up broth overnight, making the soup even thicker and heartier. Because this one simmers for hours, the lentils get a lot more suck time in, so it's like eating it the second day but it's really the first day! Hot and fresh soup at optimum consistency after a half day of a dreamy curry-smelling home. The best of all worlds, in your slow cooker. Score! 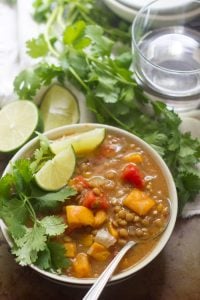