This decadent frozen nice cream is made with creamy blended up frozen bananas, with crunchy pretzels, rich chocolate and peanut butter. A sweet indulgence, that takes all of five minutes to make!

Have I told you guys about my first ever job? I think so, but I'll tell you again. I was an ice cream server at the local Dairy queen. I dished up soft serve for three summers in a row during high school and I loved it. Employees were free to help themselves to as much soft serve as they desired. We all ate it by the bucket.

My favorite Blizzard flavor was chocolate covered pretzel, one which most customers didn't even realize existed. People tended to focus on the giant bins of snickers and M&Ms when ordering. We didn't actually stock chocolate covered pretzels, instead we'd pop open a snack size bag of pretzels, dump them in the blizzard cup, top it with a scoop of chocolate shell, and blend. When all that stuff is mixed up you really can't tell that the pretzels aren't actually chocolate covered. It was delicious. I even went out on a limb one day and invented the chocolate covered potato chip blizzard, using the same general formula. Everyone thought I was nuts, but it was delicious. They really should've had me doing recipe development. DQ's loss, your win.

Banana whips, soft serve, nice cream, whatever you wanna call this stuff, I eat a lot of it in the summer. Most of the time it isn't quite this decadent, but when I got the idea to theft the old DQ formula and add some peanut butter, I couldn't help it. This had to happen.

Decadent as this creation is, it's still free of dairy, and the bulk of it is banana. Amazing things happen to bananas when you freeze them and stick them into a blender. Even more amazing things happen when you throw in some pretzels, chocolate and peanut butter. Watch out for this one. 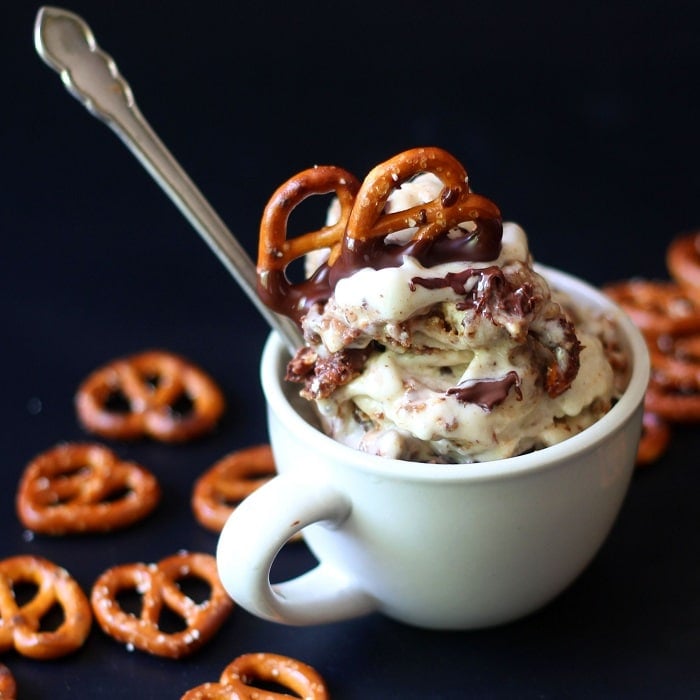