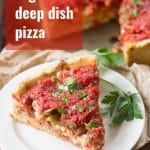 Sauté­ed mushrooms, onions, and peppers are piled on top of a cashew cheese covered cornmeal crust and smothered in garlicky tomato sauce to create this vegan deep dish pizza.

I have a handful of ambitious recipes that have been on my to-make list forever. Stuff like this: vegan deep dish pizza. The thing is, as much as I love the idea of something like this, I can mentally psych myself out. It'll be a massive project. I'll trash the kitchen. It'll probably take me eight tries to get it right. That kind of thing.

Okay, so I did trash the kitchen, but I trash the kitchen when I make toast, so don't read so much into that. And yes, this was a project, but you know what? It was fun and totally worth it. In fact, I didn't even whine about it when the first set of photos sucked and I had to make the whole thing again! Because this baby was tasty business. Totally worthy of a couple of afternoons worth of kitchen trashing!

There were two major psych-out factors to this one. Firstly, the dough. I rarely make yeast breads because I'm too lazy to knead the dough and also too lazy to bust out and clean up the stand mixer. Usually though, when I do decide to suck it up and get to kneading, it's not nearly as bad as I expect. This particular dough was exceptional -- super moist and crumbly thanks to some olive oil and cornmeal. I can handle seven minutes of kneading for that.

Then there's the cheese. I'm all about making vegan cheese...when it's easy. Like vegan cream cheese. Or nacho cheese. Throw stuff in the blender kinds of cheese. I know I'd have to do a little something extra for pizza cheese, wasn't sure I was up for the effort, and didn't know if I'd like the result. Here's the thing though: in a Chicago-style deep dish pizza, the cheese goes under the toppings. When you've got your vegan cheese squished between or under other stuff, it's a lot harder to tell what's going on.

The cheese actually turned out pretty decent in it's own right, but under a bunch of sauce and veggies, I'd probably not have guessed it was vegan. Feel free, of course, to go super lazy and use some vegan mozzarella shreds -- you'll be missing out on half the fun, but that's on you! 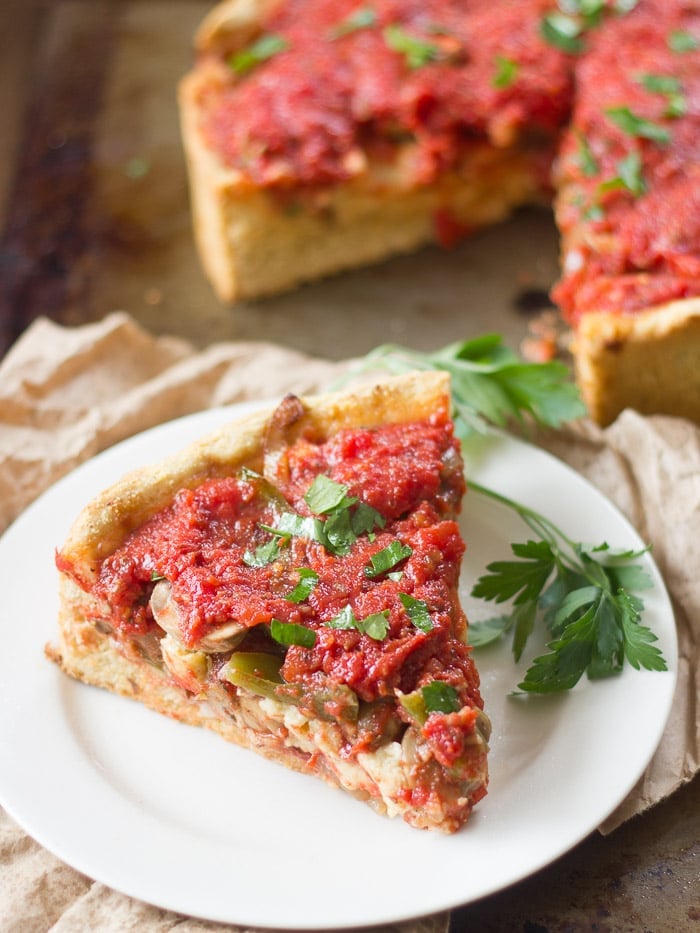 For the Vegan Mozzarella Cheese