Zucchini didn't make the cut for my vegetable garden this year. Okay, that sounds all wrong. I make it sound like it's all zucchini's fault. It's really my fault...I'm not much of a gardener, but I like to give it a shot anyway, hoping to at least get a few meager salads for my efforts.

I tried growing zucchini last year, and for a while I thought I was awesome at it. In fact, I spent most of July going around bragging about all of the big yellow blossoms on my zucchini plants and how I'd soon have way more zucchini than I knew what to do with. I dutifully jotted down everyone's suggestions and recipes for crazy things to do with zucchini. And then August came and my zucchini plants completely dried up and kicked the bucket. I ended up with one zucchini that was way too massive to do much with. Apparently they get overly starchy and not so tasty when they overgrow like that. I had no idea.

So this year I skipped the squash and stuck with things that I had at least moderate success with last year. I'll keep you posted on how all that goes.

So these didn't come from my garden. It's probably too early for that anyway. I actually ended up making this a zucchini recipe for the simple fact that I was in search of a suitable vehicle for my vegan chorizo, which I'd been wanting to create for a while now. With zucchini season forthcoming, I thought some vegan chorizo zucchini boats would be a nice idea. Everyone loves a good zucchini boat.

The vegan chorizo turned out delicious. I've never had traditional meat-based chorizo, so I can't comment as to the authenticity. I have had Trader Joe's soy chorizo, and this is definitely on par with that stuff in terms of flavor, though substantially milder, so as to spare my husband the sneezing and coughing that normally accompanies spicy stuff. If you're a spice fiend, feel free to up the cayenne. The cashew cream does a nice job of putting out the fire. 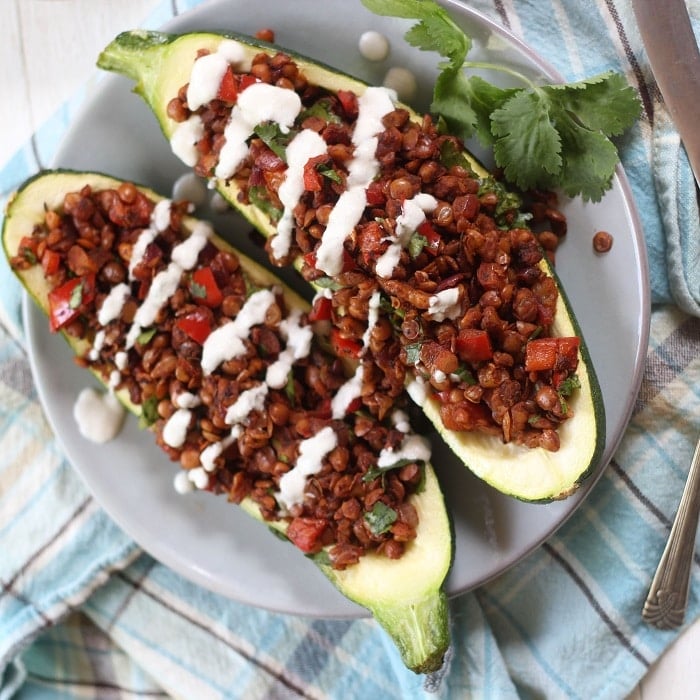 For the Lentil Walnut Chorizo