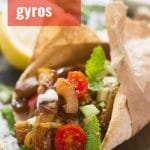 These vegan eggplant gyros are made with savory pan-fried strips of seasoned eggplant, wrapped up in warm pita bread with creamy dairy-free tzatziki. 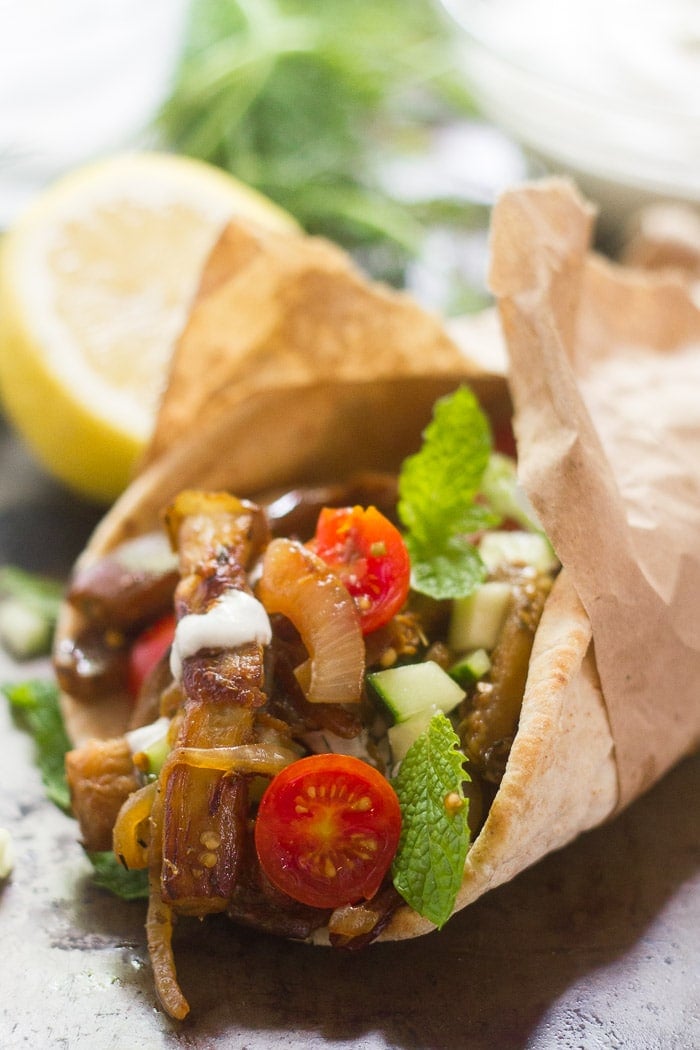 Every now and then I have to post a vegetarian version of a meat-based dish that I've never actually tasted. It's a bit of a conundrum. See, part of why I know what I'm doing when it comes to vegetarian cooking is because I've been cooking vegetarian meals for a long time.

But the reason I've been doing it so long is because I gave up meat at a pretty young age. So, lots of the dishes I'd like to make-over are dishes I've never in fact tried. 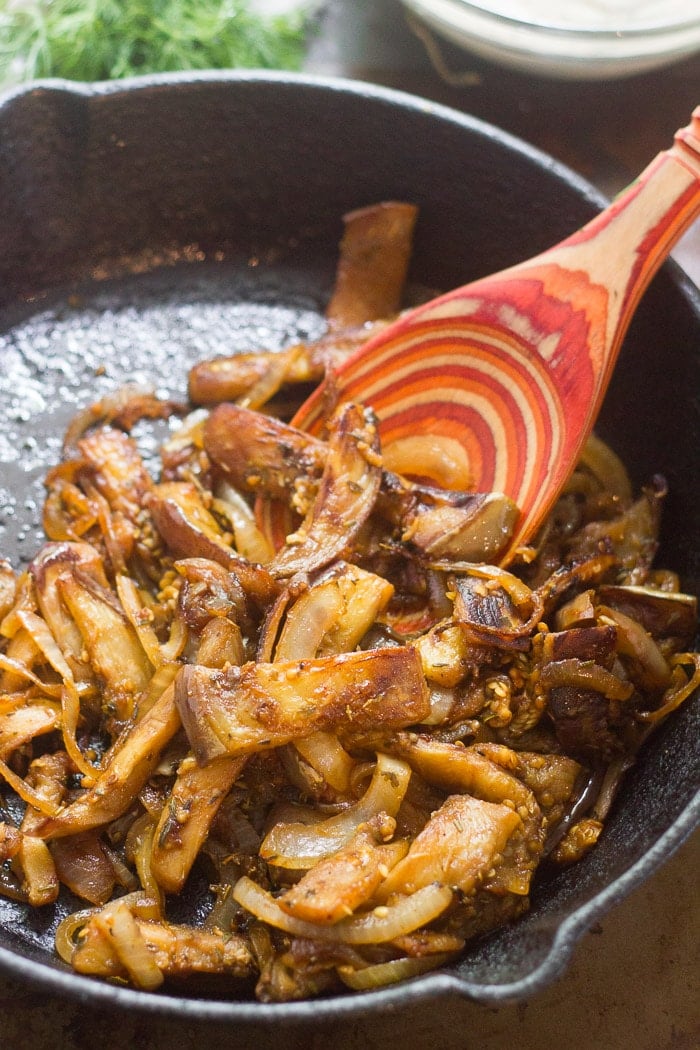 Take gyros for example. I know some parents who are pretty good at getting their kids to eat stuff that might be considered a little exotic, but lamb just wasn't happening on my dinner plate when I was a kid. So I never tried a gyro.

I've gone out for Greek food and been served sandwiches with names like "veggie pita." That, along with some Googling, is about as much as I know about what gyros taste like. 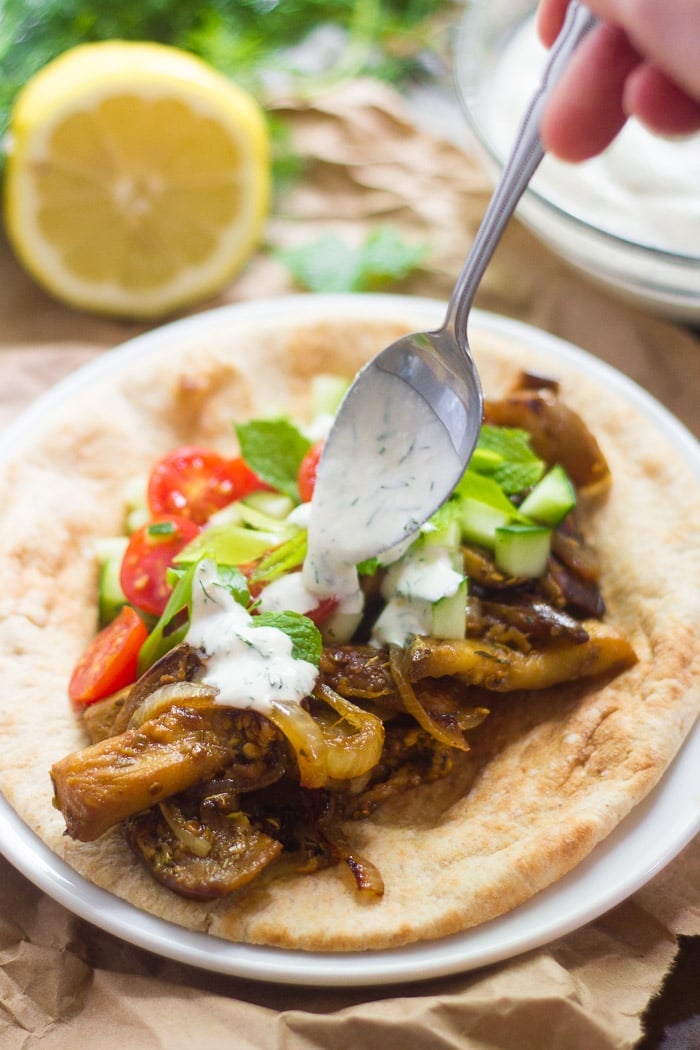 Setting authenticity aside, you should probably make these, for a few reasons.

First, they were delicious. They tasted, to me, what I always imagined a gyro would taste like, you know, except for the lamb part. They do have all of the seasonings you'd normally find in a gyro. Second, despite having never tasted a gyro, I apparently nailed it. My husband (who has had an authentic gyro) confirmed that what I created was, in fact, a gyro, only better, because it was made with eggplant. 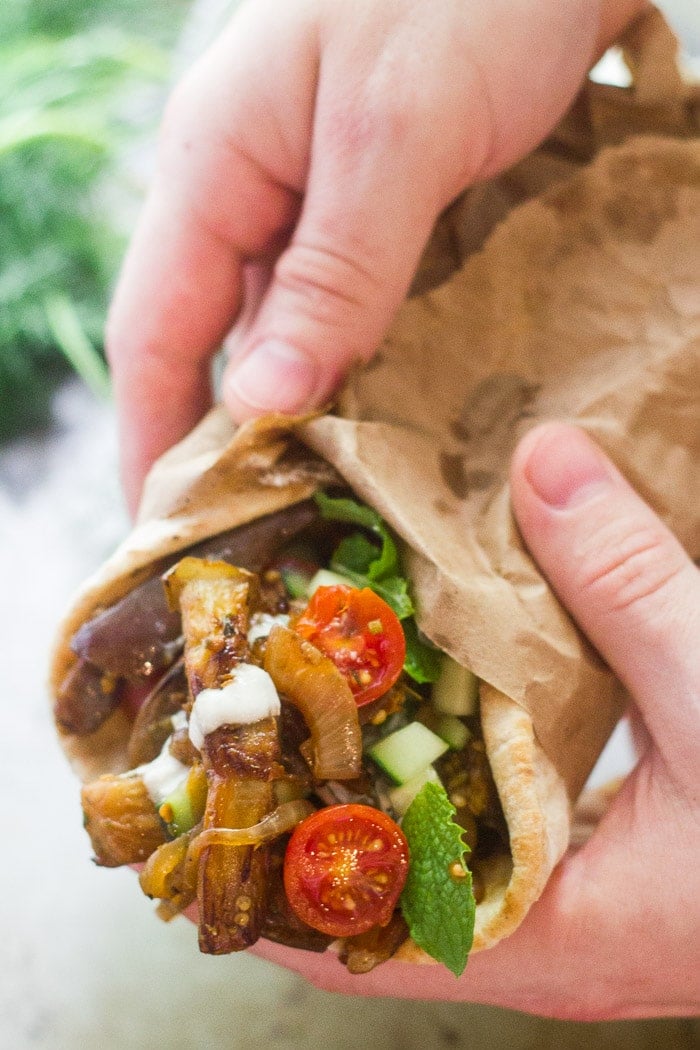 I've had tzatziki sauce, so I can say with confidence that if you're missing dairy tzatziki, this will do the trick for you. In fact, I think I like my vegan tzatziki better than the conventional version.

That's saying a lot. This stuff is super creamy and packed with garlic and dill flavor. With it slathered all over my eggplant and veggies, I felt like I could no longer claim not to know what a gyro tastes like! 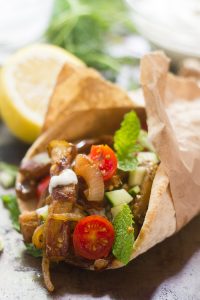 For the Vegan Tzatziki

For the Eggplant Gyro Filling

For Finishing the Gyros

Recipe and photos updated on July 17, 2017. I think this version is better, but if you're looking for the original, email me at alissa@connoisseurusveg.com. If your eggplant is any larger than 1 pound (assuming you're doubling the recipe or only using part of a larger eggplant), or has a significant amount of seeds, consider salting it before marinading. This will draw out any excess bitterness that the seeds develop as they age. You will likely have more tzatziki than you need. It should keep in the fridge for a few days. You can also seal it up and freeze it, or use it for another batch of these later in the week, or as a salad dressing.