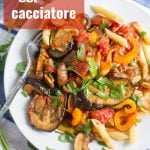 This vegan eggplant cacciatore is made with melt-in-your mouth slabs of roasted eggplant simmered in a light white wine tomato sauce with savory mushrooms, garlic and bell peppers.

At some point when I was growing up my mom discovered chicken cacciatore and it quickly became on of her favorite dinners to make. Somehow, I don't think I ever tried it though. I'm not sure if I'd already gone vegetarian at that point, or maybe was just close to making the switch and not terribly interested in chicken. I guess I was at an age when I wasn't much interested in vegetables either. I've always been okay with veggies, but when I was thirteen I just didn't get psyched up over eggplant and bell peppers like I do today.

Mom would've loved eggplant cacciatore, had I come up with it at the time, and I'm pretty sure this would've done wonders to work up my enthusiasm for veggies back then.

Well, here I am now with my veganized version of mom's fave. Perfect timing actually, because not only am I perpetually psyched about veggies these days, but it's also springtime, and a particularly chilly one when I live. This dish is perfect for (any day, but especially) spring days when there's a little nip in the air. Though the dish features lots of summery veggies and a light sauce, but it's also served over pasta (so it will fill you up!) and features savoy spices I crave on cooler days. 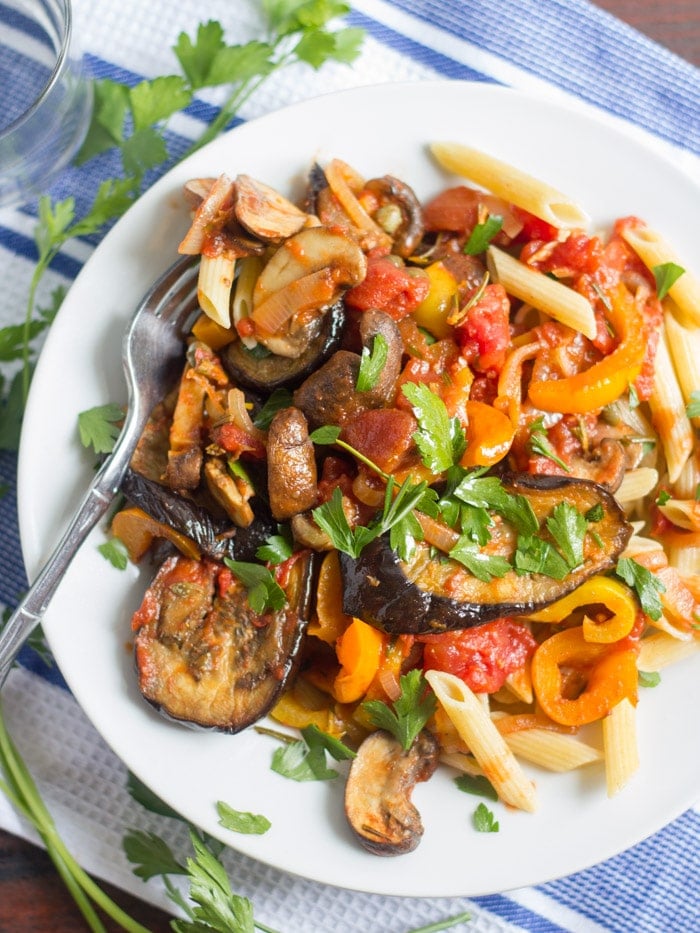 If your eggplants have been hanging around for a while, salt them first. Sprinkle slices liberally with salt and allow to sit for 30 minutes. Rinse well, then dry.
I used 3 small eggplants. If you're working with 1 or 2 larger eggplants, feel free to cut the slabs in half or even dice them so they're easier to work with.