Penne pasta and broccoli florets are tossed in a creamy cashew sauce with sun-dried tomatoes, basil and walnuts to make this luscious vegan dinner.

Back when I waited tables during college, I worked at a restaurant that just about always scheduled their servers for double shifts. That was pretty rough. At the end of ten or more hours on my feet, delivering food to (some pretty demanding) customers, I was exhausted. But at least I got a free lunch. They always let anyone that was working a double pick a pasta entree off the menu. My go-to order was a big plate of penne pasta in pink sauce with broccoli.

As tasty as that sounds, I can't even imagine eating such a thing these days. White flour, heavy cream, oh, and did I mention that it was big? These meals were enormous, but I justified it on the grounds that I'd need lots of energy to get through my shift.

Hey, at least there was broccoli involved.

Even though I wouldn't be down with something that heavy these days, I have to admit, it was tasty. So I decided to head to the kitchen and recreate a bit of that tastiness, but using more wholesome ingredients.

My creamy sun-dried tomato pesto pasta is actually better that my old penne with pink sauce. It takes all the best elements from that dish: tender pasta, tangy tomatoes, creamy sauce...and adds a few new elements for extra texture, flavor, and nutrition. Sun-dried tomatoes pack in extra flavor, so I used them in lieu of canned or fresh. And instead of just making a regular old sun-dried tomato sauce, I made it a pesto...sort of. The sauce starts with a creamy cashew base, and to that I added ingredients you might normally find in a sun-dried tomato pesto: basil, garlic, walnuts. I didn't add any oil though, as it wasn't needed. That's just one of the many beauties of using a creamy pesto sauce.

Of course when making over the recipe I had to keep the broccoli. Ever since making these soba noodles I'm all about cooking my veggies in the same pot as my pasta, so I kept things simple and did just that. Throw some broccoli in the pot when the pasta's almost done, then drain everything together, sauce it up, and enjoy! 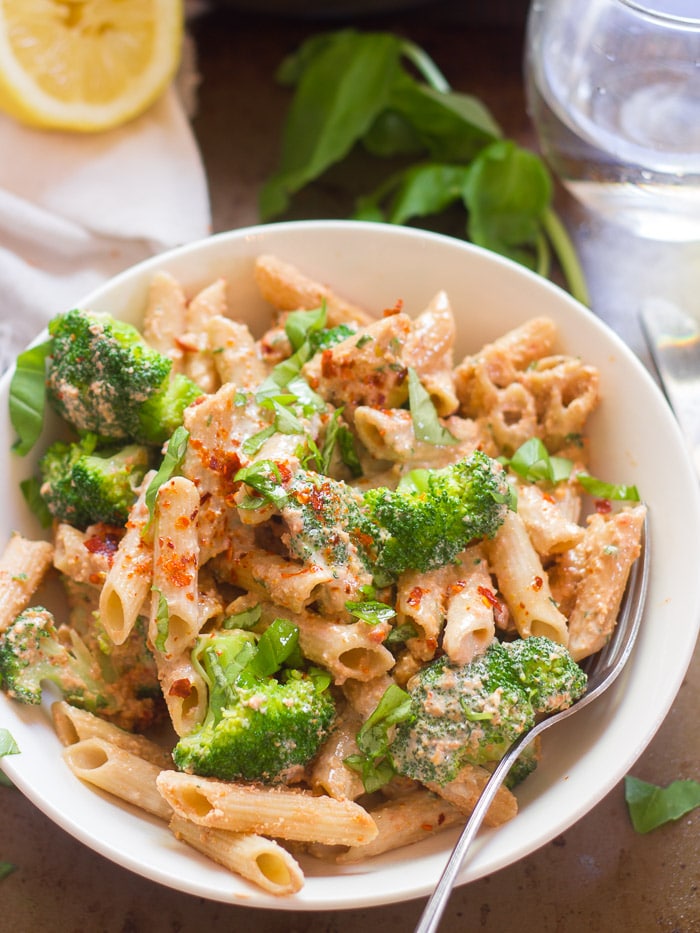 For the Creamy Sun-Dried Tomato Pesto

For the Penne Pasta