This cauliflower mushroom soup is made with a rich cauliflower base, seasoned with garlic, leeks and white wine, and loaded with tender sautéed mushrooms.

Sheesh. I haven't posted a soup recipe since last year. Time to change that!

This soup was a fail-win. It exactly didn't turn out in line with my original expectation (fail), but super delicious nonetheless (win), so I'm blogging it.

My original idea was to create a vegan cream of mushroom soup. That could have been really simple. Seriously, I made a vegan green bean casserole last November. The main ingredient in conventional green bean casserole is cream of mushroom soup. I can say with some confidence as a result of that experience that the answer is as simple as soy or almond milk. I got it in my head though that I wanted something super rich and creamy, you know, to give heavy cream based soups a run for their money. I've done a few things along those lines lately using cashews, but I recognize that cashews don't work for everyone's diets, and I get lots of questions on substitutions from readers with nut allergies.

I was right and wrong, and in hindsight, it kind of makes sense, given what I've heard about cauliflower Alfredo. The soup did not taste like cream of mushroom soup. It was creamy and mushroomy, and undoubtedly soupey, but cream of mushroom soup it was not. I guess I was a little bummed at first, but given the bowl licking, bread mopping, and my husband's repeated exclamations of "I would never have known this was vegan!" I decided it was postworthy.

This is a great soup for today - today being the first non-holiday day of the year when lots of us, myself included, are looking to de-cookie our diets and our bodies. Despite its healthiness, this soup is rich and comforting. Cauliflower is one of those ingredients with lots of deceptively healthy potential. It's hard to believe that a few short years back I probably would've called it boring and named it my least favorite vegetable. It's now approaching the top of my list, which is pretty apparent to me based on my review of this month's posting schedule. Get ready for some cauli in 2015, folks! 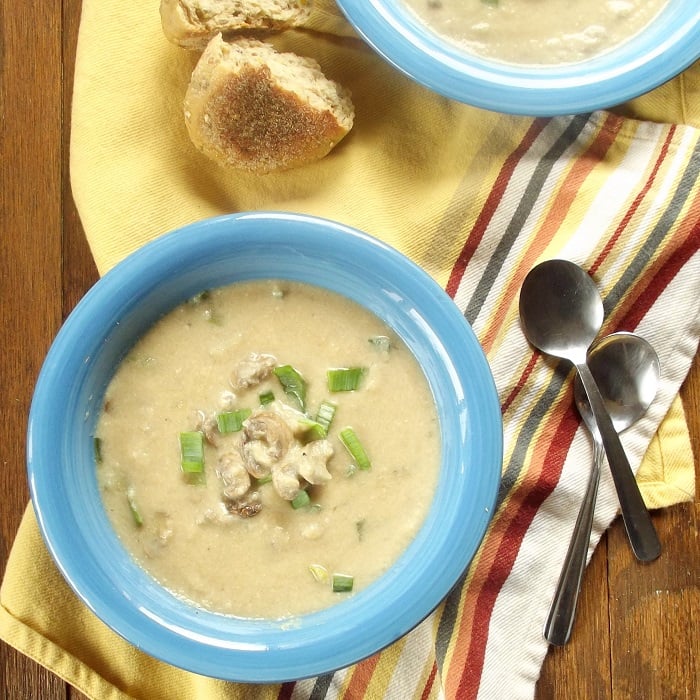