×
You are here: Home / Guides / How to Substitute Agave for Honey 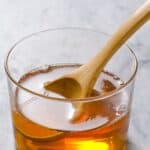 Wondering if you can substitute agave nectar for honey? The answer is yes! Read on to find out how!

So many recipes call for honey these days! This is partly because of honey's supposed health benefits, but also because sometimes it's just convenient to use a liquid sweetener. Liquid sweeteners like honey add both sweetness and moisture to baked goods, don't require dissolving when mixed with liquids, and can add a unique flavor to all sorts of dishes from desserts to hot beverages to salad dressings!

But if you're following a vegan diet, honey is off the table. (Bees are animals too!) It's also not recommended to give honey to infants under the age of one. And in some cases, you might just not have any honey on hand.

If any of these instances apply to you, you're probably in need of a honey substitute. So here comes the big question:

Can I substitute agave for honey?

Yes, you absolutely can substitute agave nectar for honey in almost any recipe, with a few small exceptions.

What is Agave Nectar?

Agave is a syrup derived from the blue agave plant, which is a variety of succulent that grows in the desert. Because of this, it's considered a natural sweetener.

To make agave syrup, the nectar, or sap within the leaves of the plant is extracted, then heated in order to distill the liquid into a syrup.

Agave and honey are both natural liquid sweeteners, and they have very similar properties, including about the same texture and thick, yet pourable consistency. Honey is generally slightly thicker than agave. I say generally because raw honey is an exception. Raw honey is much thicker than pasteurized honey (which is the type you'll usually find on store shelves), so you may not be able to substitute agave in recipes that specifically call for raw honey.

Agave and honey have about the same levels of sweetness. Both contain about 60 calories per tablespoon, all of which come from sugars (neither contains any fat, protein, or fiber).

Agave also has a more neutral flavor than honey, and you'll find it's flavor and appearance to be consistent across different brands and varieties. Honey, on the other hand, can be produced from a variety of flowers, each resulting in a slightly different flavor and color.

Honey and agave vary a bit nutritionally. Honey is compose of almost equal amounts of fructose and glucose (about 60% fructose and 40% glucose), whereas the sugar in agave is almost all fructose (80%, with 20% coming from glucose). Fructose and glucose are both simple sugars, but fructose doesn't raise blood sugar levels as much or as rapidly as glucose. Because of this, agave nectar has a lower glycemic index than honey.

Because of it's low glycemic index and the fact that it is a natural product, agave is often marketed as a healthy alternative to honey and other sweeteners, but research done in recent years indicates that this may not be the entire picture, as it can raise triglycerides similarly to other sweeteners such as high-fructose corn syrup.

Small quantities of agave nectar should be fine if you're healthy, keeping in mind that too much sugar of any type isn't a great thing. It's probably a good idea consult your doctor or nutritionist if you plan on consuming much agave.

You should be able to find both agave and honey at the grocery store (probably right next to each other), in the baking or sweeteners section.

How to Substitute Agave for Honey

Agave is one of the best substitutes for honey in my experience, but if you'd like to experiment with some other plant-based liquid sweeteners, here are a few of your best options: