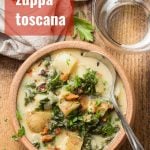 This cozy vegan Zuppa Toscana is made with hearty potatoes and kale in creamy broth. (Vegan sausage is optional!) As rich and decadent as the original — you’d never guess this soup was dairy free! 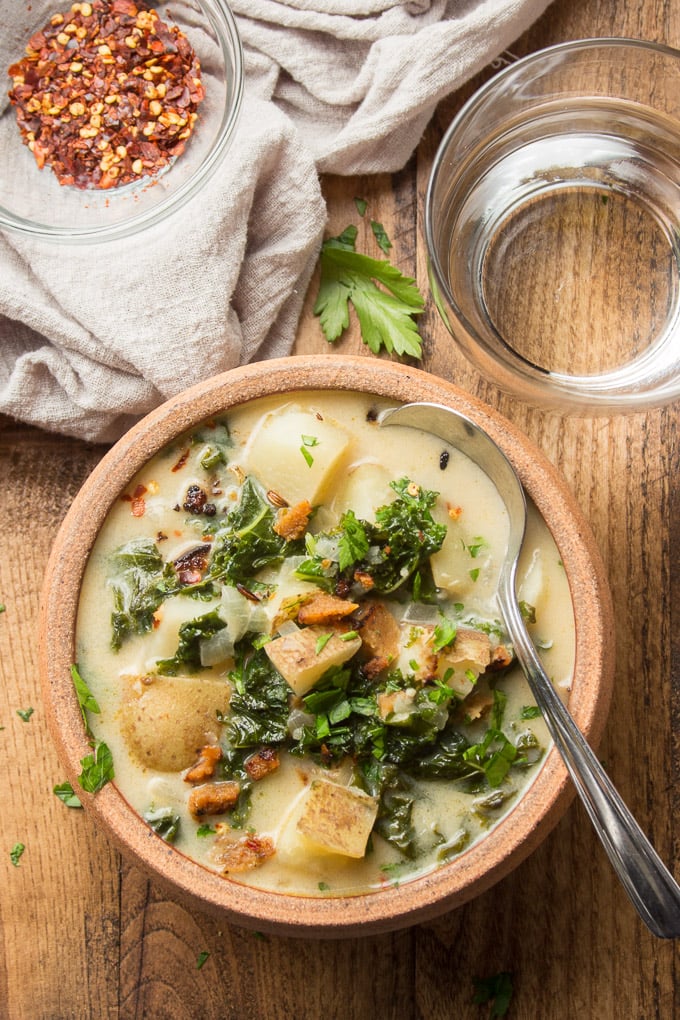 Have I mentioned that I love recipe requests? Because I do!

I especially love requests for veganized versions of old comfort food favorites. There are lots of dishes out there that need veganizing, and many of them I’ve never even tried.

I while back (over two years ago now) I asked people on my Facebook page what dishes they’d like to see me veganize, and oh boy, did I ever get a lot of responses. I’ve hit a bunch of those dishes at this point and I’ll continue working my way through the list.

I had a few folks ask for Zuppa Toscana. It wasn’t until recently that I realized that I was hanging on to an old potato kale soup recipe that was pretty darn close to it. The recipe needed some photos and a few tweaks, but that’s about it. I went ahead and took the final step into making it into a recipe for vegan Zuppa Toscana to share with you guys.

What is Zuppa Toscana? 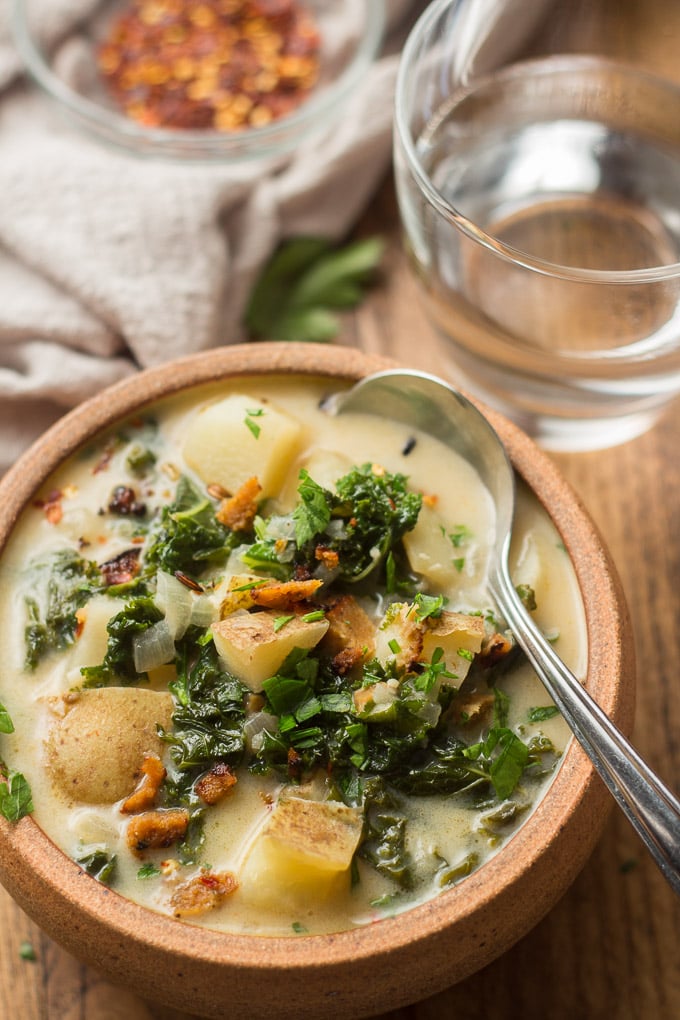 Zuppa Toscana is an Olive Garden soup made with potatoes and kale in a creamy broth. It also has chunks Italian sausage. I’ve also seen recipes that call for bacon, though I’m not sure if Olive Garden’s version has that.

I’ve never had the original Zuppa Toscana, but let me tell you, the vegan version is soooooooo good. I can see why so many people asked for this recipe.

How to Veganize Zuppa Toscana 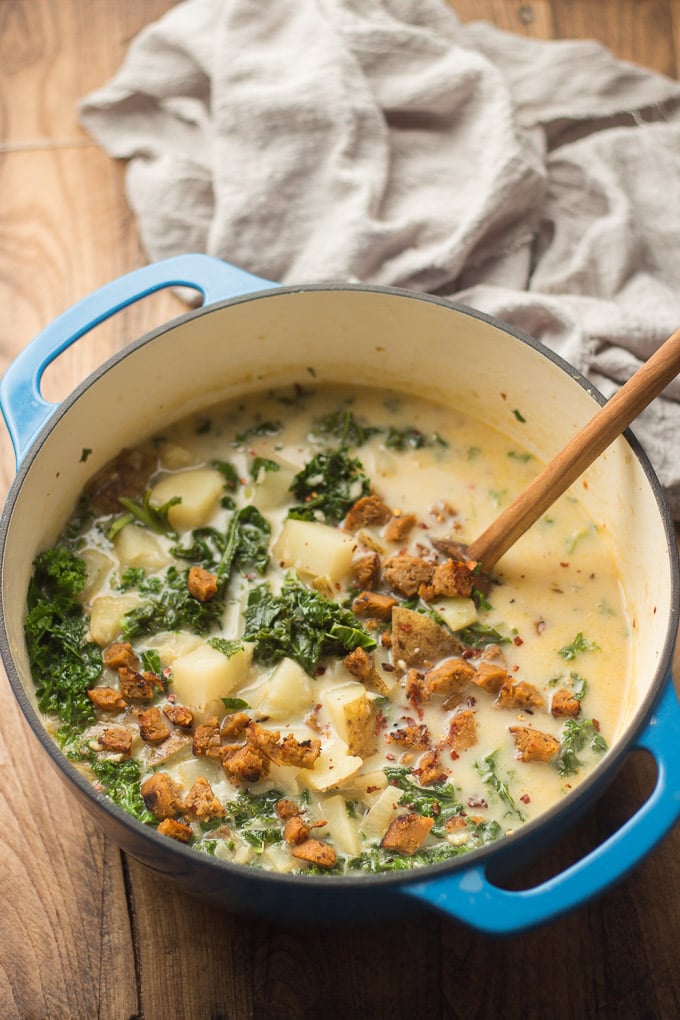 In place of the dairy you’d find in most copycat Zuppa Toscana recipes, I’ve used coconut milk. Coconut milk, just like heavy cream (which I’m guessing the Olive Garden uses) is super fatty, so it gives you a richer and creamier soup than you’d get with other types of non-dairy milk.

I did include vegan sausage when I made this at home, but if you’re not into that kind of thing you can totally leave it out! I used Field roast Italian sausage links, and they worked great. You could also skip the sausage and include some vegan bacon, like coconut bacon or the tempeh bacon from this vegan bean with bacon soup.

How to Make Vegan Zuppa Toscana

Start by heating up some olive oil in a large pot. Give the oil a minute to get hot and then add your onion. Cook the onion for five minutes or so to soften it up, then add a generous amount of garlic. Just cook the garlic for just about a minute to avoid burning it.

Add some white wine and let it simmer until almost all of it has cooked off.

Next, whisk in just a little bit of flour. We’re using just enough to thicken up the soup slightly — Zuppa Toscana isn’t normally super thick! Sprinkle the flour into the pot and stir it around to coat your onions. Cook it for about 2 minutes, then start adding the broth, just a bit at a time, whisking each addition into the flour so you get a nice smooth mixture without lumps. 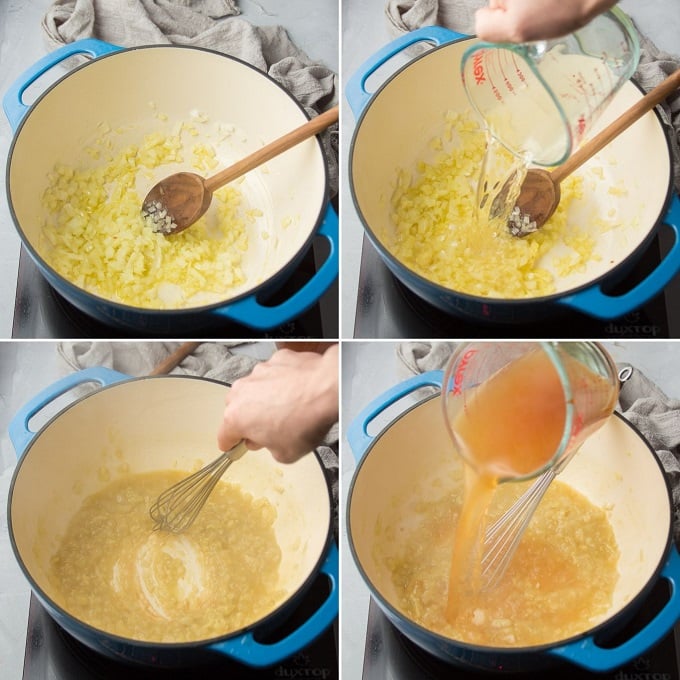 Add some potatoes and red pepper flakes, bring everything up to a simmer, and let it cook until the potatoes are tender.

The coconut milk and kale go in next. You’ll probably need to add the kale in batches, letting each addition wilt before adding more.

Let the soup simmer for a few more minutes, until the kale is tender. 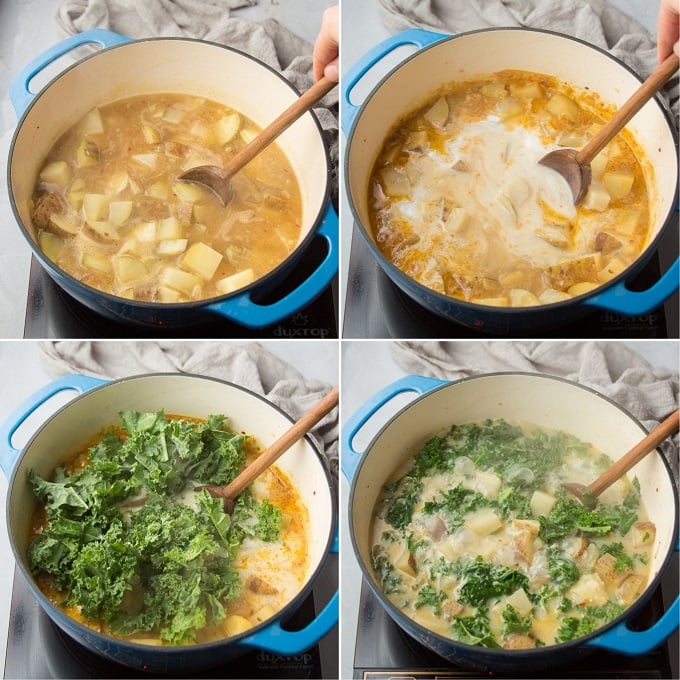 Stir in some lemon juice, salt and pepper before serving. Grab a bowl! 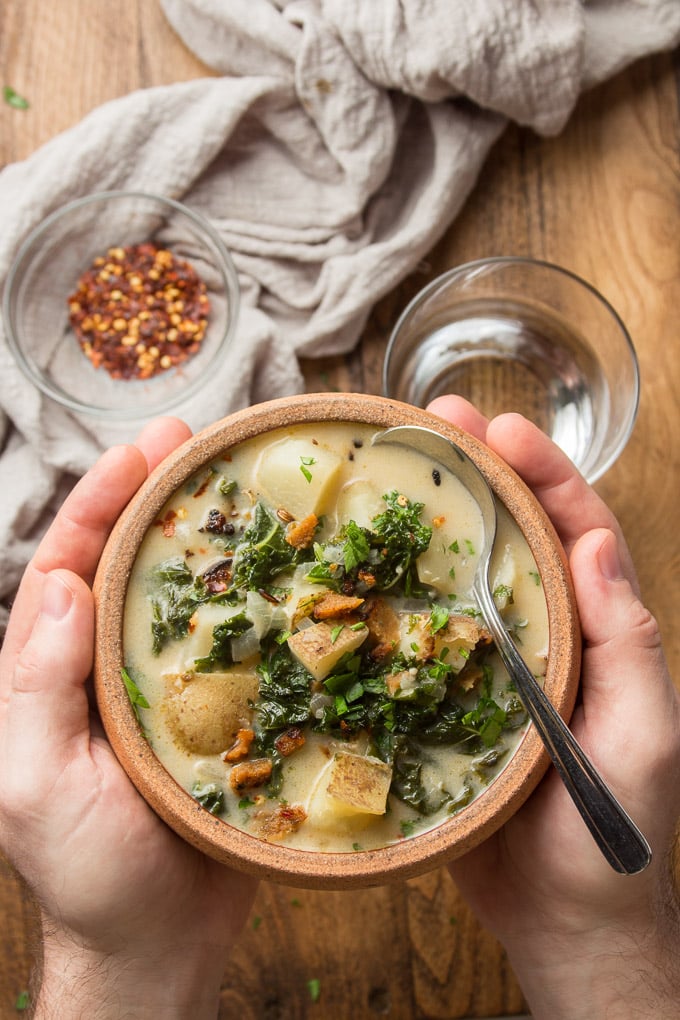 This cozy vegan Zuppa Toscana is made with hearty potatoes and kale in creamy broth (vegan sausage is optional!). As rich and decadent as the original — you'd never guess this soup was dairy free!