These vegan French onion pot pies are made with a hearty seitan and caramelized onion stew topped with a layer of flaky olive oil pie crust!

French onion soup has been the downfall of many-a-vegetarian. It's one of those things that lots of folks don't really think about upon converting to a meatless lifestyle. I've dined at restaurants several times with veggie friends who ordered French onion soup without realizing the stuff is typically made with beef broth. It's always a huge bummer when they find out it is.

I was pretty proud of myself when I created a vegetarian French onion soup a few years back. It wasn't really difficult or anything - I pretty much just swapped beef broth for vegetable broth, but it still felt like a big victory. I could feed all of those vegetarian friends who longed for their old favorite.

Creating a vegan version is another story, but it's something I've been wanting to do for a while. The problem lies in the fact that traditional French onion soup is topped with big melted cheese covered crouton, which is not quite as simple to replicate as beef broth. I figured I had two options:

(1) Omit the big cheesy crouton. Easy enough. I didn't want to do that though. I want to create vegan foods that are have at least as much good stuff as the original version, and preferably more.

(2) Create a vegan big cheesy crouton. Tough, but probably doable, with lots of trial and error. Probably would require some unusual ingredients, which, in my experience, most people don't feel like hunting down.

I'd been wanting to do a vegan pot pie recipe anyway. This seemed like the perfect fit. Where you'd normally find bread and melted cheese, your French onion soup will now have a layer of flaky olive oil pastry. I also added in some seitan, mainly to add protein and balance out what otherwise seemed like a carb-heavy meal. I know seitan is a bit touchy for some, so I've included alternatives in the recipe. However you end up making this, you'll have a nice little pie full of comfort with lots of holiday dinner potential. 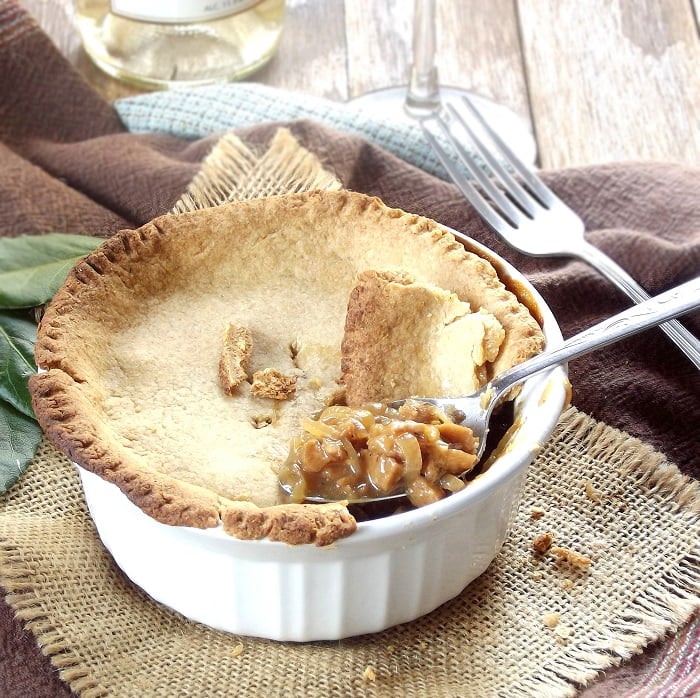 For the French Onion Filling

If you're not into seitan, you've got a few options. First, you could simply omit it, though you will end up with less filling and fewer pot pies (so cut back on the pastry as well). You could substitute mushrooms (crimini would be nice), tempeh, or veggies (try root veggies like carrots).
*I used 5.5 inch, 16 oz. ramekins, which yielded 4 pot pies. Use smaller ramekins to get 5 or 6 pot pies.