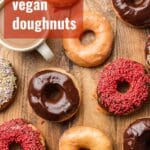 Okay, so the internet already has a million and one recipes for vegan doughnuts. But almost all of them are for baked doughnuts. These are different — they taste just like they came from a doughnut shop. That’s because they’re made just like doughnut shop doughnuts!

Did you know that legit doughnut shop doughnuts aren’t baked? My husband didn’t. When I told him I wanted to make legit vegan doughnuts for once (for upcoming Fat Tuesday), he looked pretty confused. Like, don’t you already have a bunch of recipes for vegan doughnuts? 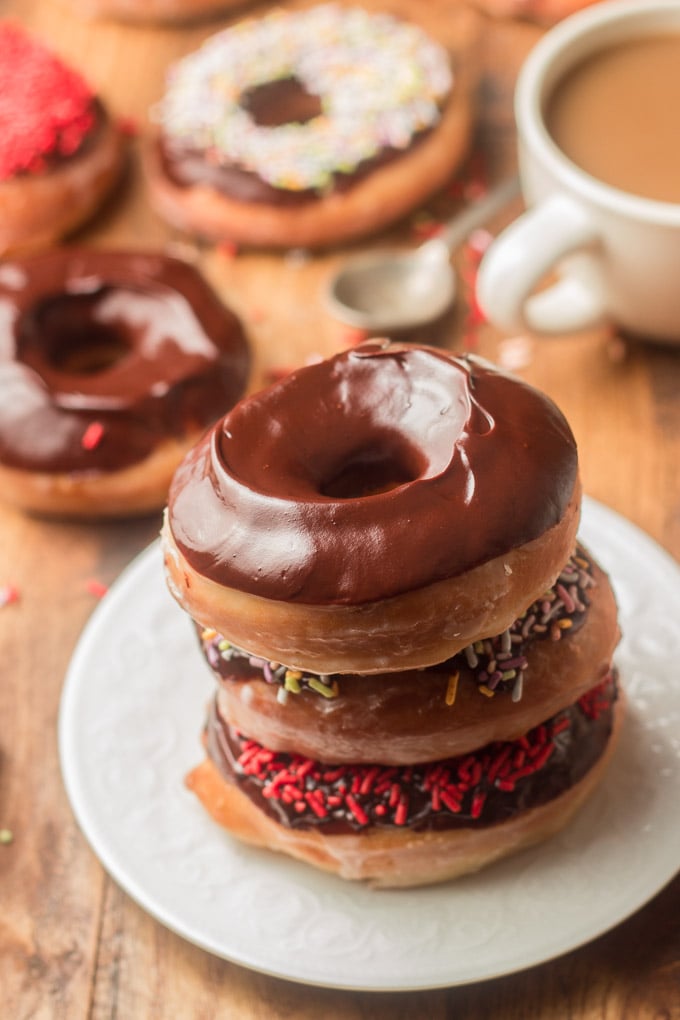 In case anyone else didn’t know, the doughnuts that you get at a doughnut shop or bakery aren’t baked. They’re fried.

No wonder those suckers are so good. And yes, I acknowledge the fact that frying isn’t as healthy as baking, but we’re talking about doughnuts, not some superfood power salad. So I fried them.

Also, legit doughnuts are generally yeast-risen (there are exceptions, like cake doughnuts). That’s why the texture of baked doughnuts (typically leavened with baking soda or powder) is a bit different.

How to Make Vegan Doughnuts

Obviously these doughnuts are going to be a bit more work than doughnut-pan doughnuts. They’re so worth it! Get started early in the day so your dough has plenty of time to rise.

Start by warming up some non-dairy milk in a bowl or liquid measuring cup. Don’t get it too hot or it will kill your yeast. Go with bath-temperature water. Add some sugar and whisk in a packet of yeast. Let it sit for about 10 minutes.  It should get frothy during this time — if not, your yeast is dead and you’ll need to start over with a fresh packet.

Now it’s time to beat some vegan butter (softened to room temperature) and sugar together with an electric mixer. Next add some vanilla and salt, followed by that milk-yeast mixture. Beat everything together. 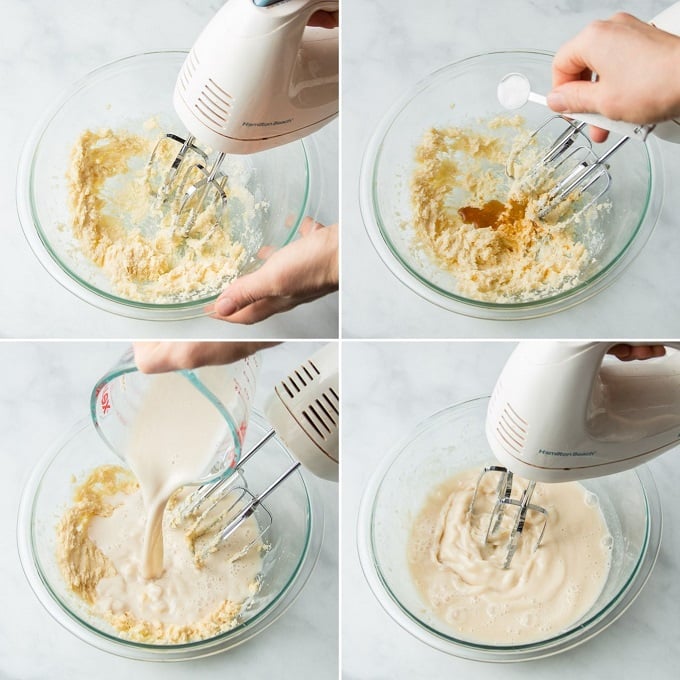 Now start beating in some flour. Add just a bit at a time. Before long you’ll have a dough that’s too thick for the mixer to handle — ditch the mixer and switch to a spoon. 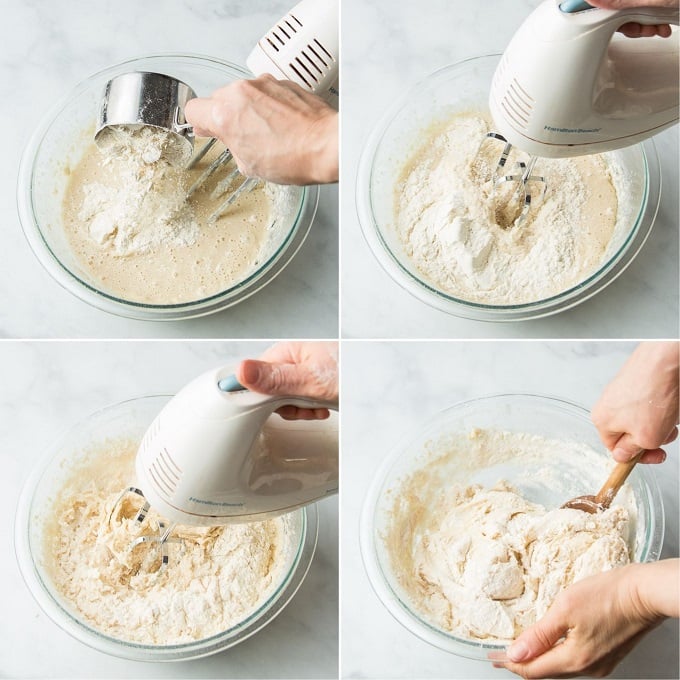 Once you’ve got your dough mixed, you’ll need to knead it. Sprinkle some flour on the counter and work the dough for about five minutes, until it’s smooth and stretchy.

Coat a mixing bowl with oil, place the dough inside, and cover it with a damp towel. Place it in a warm spot in the kitchen to rise. I like to stick it in the oven with the light on for this. In about an hour or so (depending on the temperature), your dough will double in size.

Sprinkle some more flour on the counter and use a rolling-pin to roll out your dough. You want it to be about 1/2 inch thick. Now cut it into doughnuts! I’m using doughnut cutters, but feel free to use biscuit cutters or a knife if you don’t have any. You’ll want something that’s about 3 1/2 inches in diameter.

Place your cut doughnuts on a parchment paper-lined baking sheet, cover them with a damp towel, and place them in a warm spot to rise again. Yes, this is the second time we’re letting our dough rise!

Let your doughnuts rise until they puff up a bit. This should take 45 minutes to an hour.

Now for the fun part.

Use a large Dutch oven for this. Pour in some oil. Okay, pour in a lot of oil. You want it to be at least 1 1/2 inches deep.

Now heat it up! This will take a few minutes. Use a deep-frying thermometer to monitor the oil temperature. When it reaches about 350°F, your ready to fry!

Fry a few doughnuts at a time, making sure not to crowd the pot. The doughnuts will float while they fry, so you’ll need to do one side at a time, frying until each side is golden brown. This should only take a minute or two per side. If you saved your doughnut holes, fry them as well!

Transfer the fried doughnuts to a paper-towel lined plate.

While the doughnuts cool, mix up some glaze and/or frosting. I made both! 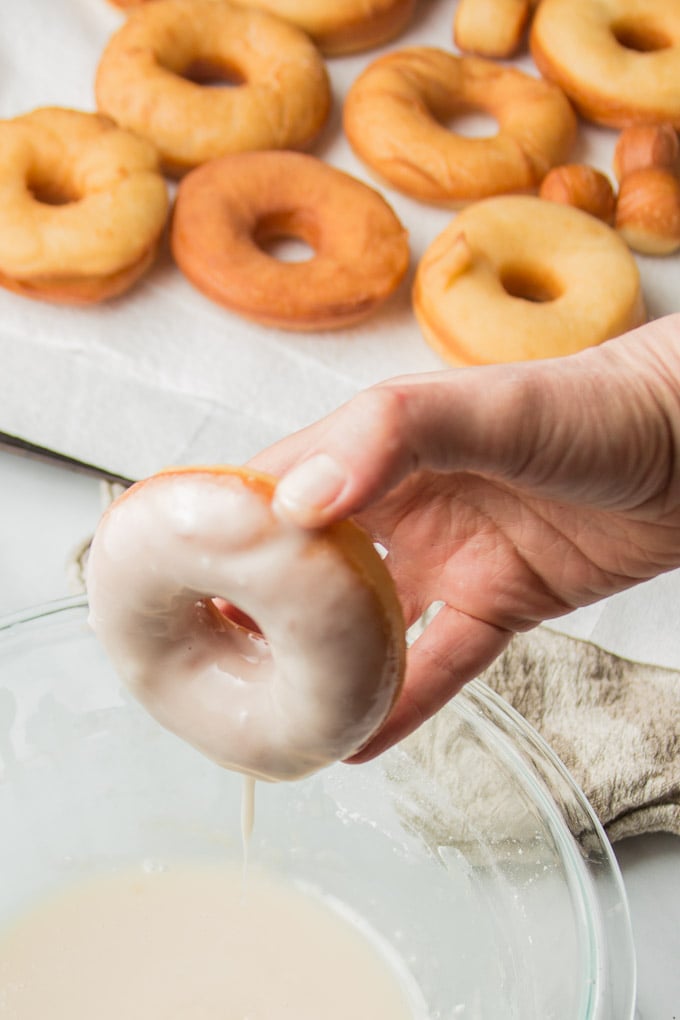 If you’d like to frost them as well, let the glaze harden first, then dip the tops in frosting. Sprinkles add a nice decorative touch! 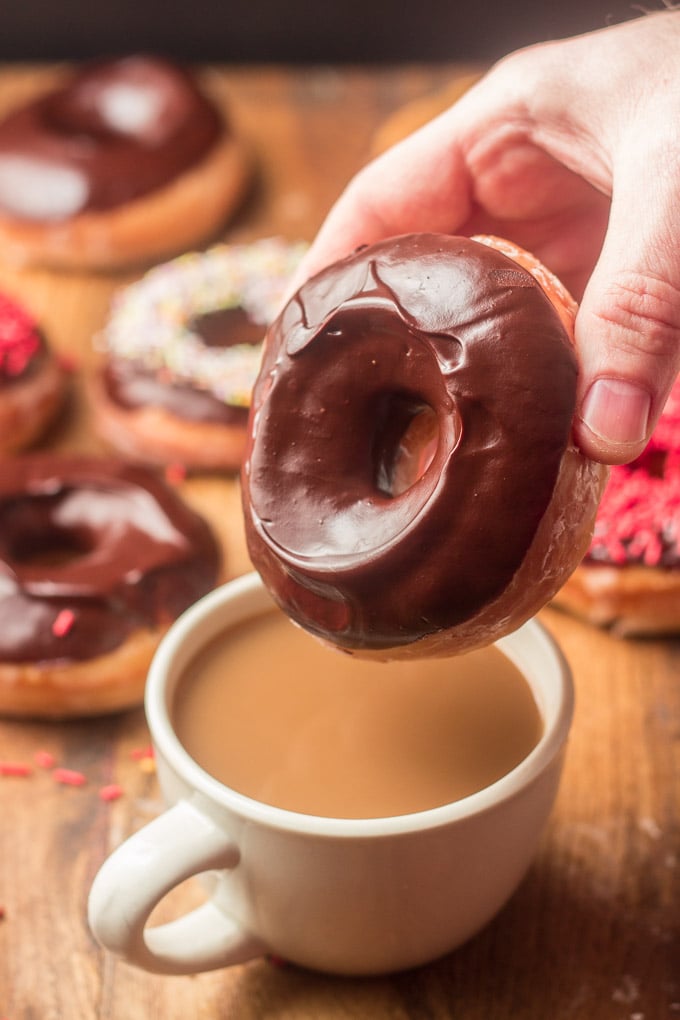 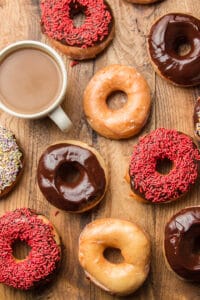 For the Chocolate Frosting (Optional)

To Make the Doughnuts

To Make the Glaze

To Make the Chocolate Frosting