It's November and once again I'm blogging as many Thanksgiving-themed recipes I can squeeze into a month. Today we're talking dessert!

Isn't dessert one of those things that require a lot of planning? If not that, isn't it at least your favorite dish to anticipate for as long as possible? Whatever the case, my second Thanksgiving related post of the month is dessert, and a damn good one at that.

I've wanted to make a vegan pecan pie for a while now. For some reason I thought it'd be easy. Pecans are already vegan, vegan pie crust is easy enough to make/find...so, it couldn't be that tough, right? Then I read this. Apparently creating a vegan pecan pie isn't as easy as I thought. I guess I'd forgotten the one nearly essential non vegan-component to pecan pie: eggs.

You can't really blame me - it's not like they call it "egg pecan pie," which would be helpful, if you ask me.

So, I did the smart thing and copped PPK's logic. I used tofu.

You'd never know there was tofu in here. In fact, I fed this to a friend and grilled her as to what the secret ingredient might be. "Bananas? Coconut? What is it?!" (Okay, it does contain coconut milk, but that's not that weird. The pie doesn't taste like banana or coconut - I think she was just at a loss as to what unusual ingredient it could possibly contain.)

Since extra firm silken tofu can be hard to come by, I tried using regular old extra firm tofu. It worked. Once you run that stuff through the food processor it becomes completely smooth.

The other thing about this pie: it's a pecan pie of the chocolate variety. I've seen a few chocolate pecan pies floating around Pinterest, but not a single vegan one. I love chocolate in just about anything, so I figured I couldn't go wrong with it in a pecan pie, and I didn't. There are very few things that I can imagine would be less tasty with the addition of chocolate. Vegan pecan pie filling, it seems, tastes something like cinnamoney pecan-studded fudge. That's what I thought anyway. Not to far from the chocolate fudge I got at the Jersey shore as a kid. In other words, very rich, which means you need not concern yourself with creating a vegan whipped cream topping. 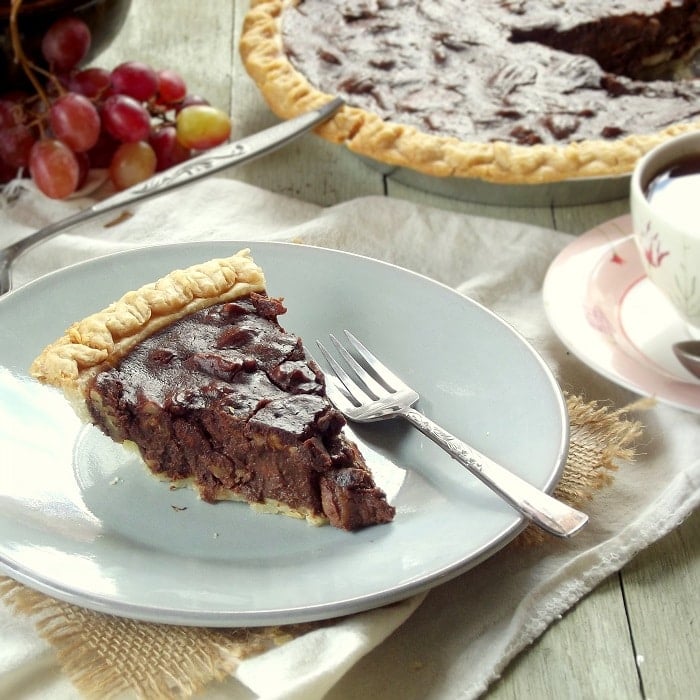