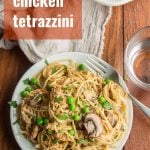 This creamy vegan chicken tetrazzini is the hearty comfort food meal you’ve been waiting for! Made with spaghetti baked in creamy sauce with mushrooms and soy curls, this cozy casserole is guaranteed to satisfy your cravings. 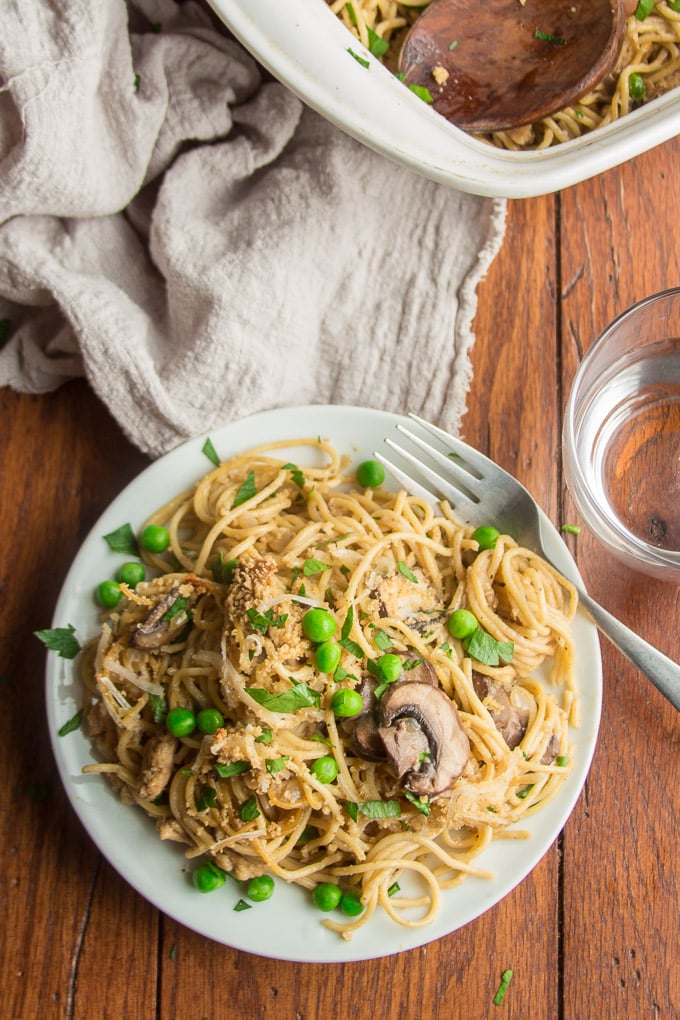 I keep a list of dishes to veganize, and chicken tetrazzini has been on it forever! I kept changing my mind about how to go about replacing the chicken. Should I just leave it out? Double up on mushrooms? Use seitan?

Well the answer came to me last month when I posted my vegan ropa vieja recipe using soy curls. You guys loved it! And soy curls make a great chicken substitute, so I went ahead and put them into this tetrazzini. They worked like a charm!

What is Chicken Tetrazzini? 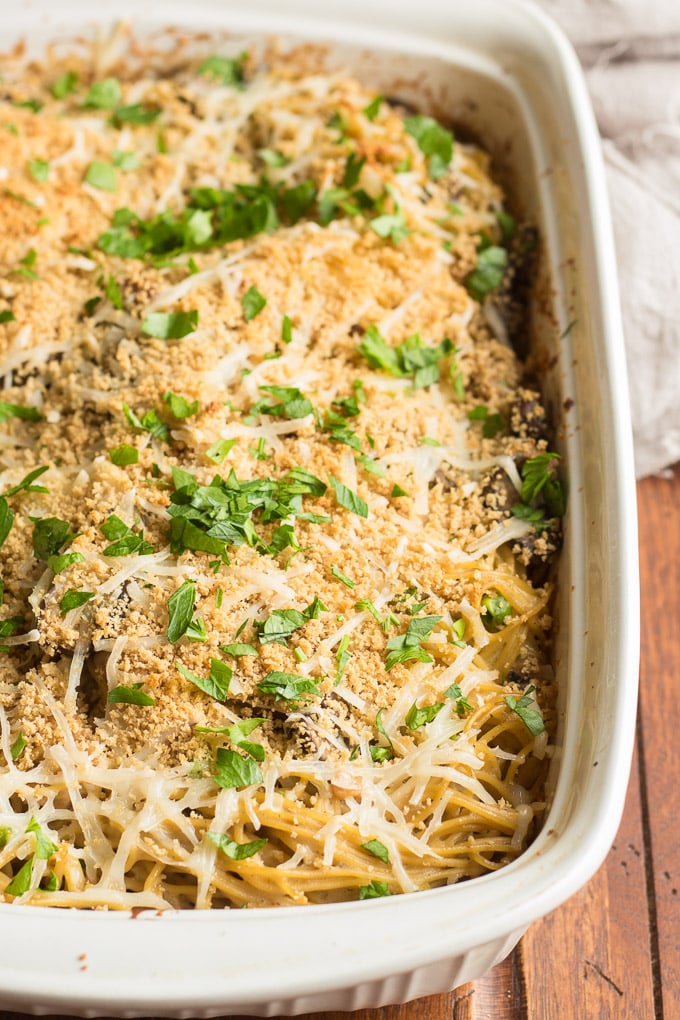 This is one of those classic dishes that I never actually had when I was growing up, but it’s straightforward enough: tetrazzini is a big old pasta bake with creamy sauce, chicken and mushrooms, often topped off with cheese and breadcrumbs. I did say this was comfort food, right?

You’ll find lots of recipes that go about making this dish in different ways, many featuring cans of cream of mushroom and/or cream of chicken soup, others taking a from-scratch approach involving fresh mushrooms and heavy cream.

How to Veganize Chicken Tetrazzini 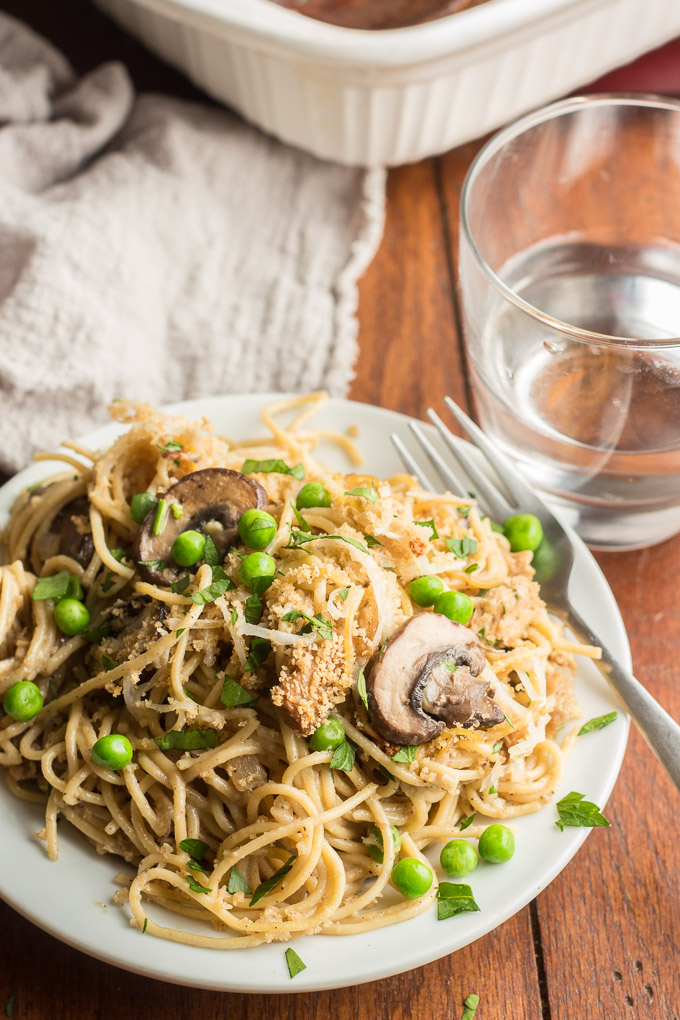 With our vegan version we’re using a more from-scratch method. Since creamy canned vegan soups aren’t readily available, we’ll be making our own creamy sauce using coconut milk and some other non-dairy milk.

And of course we’re using our soy curls instead of chicken. We’ll be seasoning them with poultry seasoning to give them lots of savory flavor.

How to Make Vegan Chicken Tetrazzini

You’ll need to start by soaking your soy curls in some flavorful vegetable broth. They’ll only need about 10 minutes, and once they’re soaked you can dice them up. 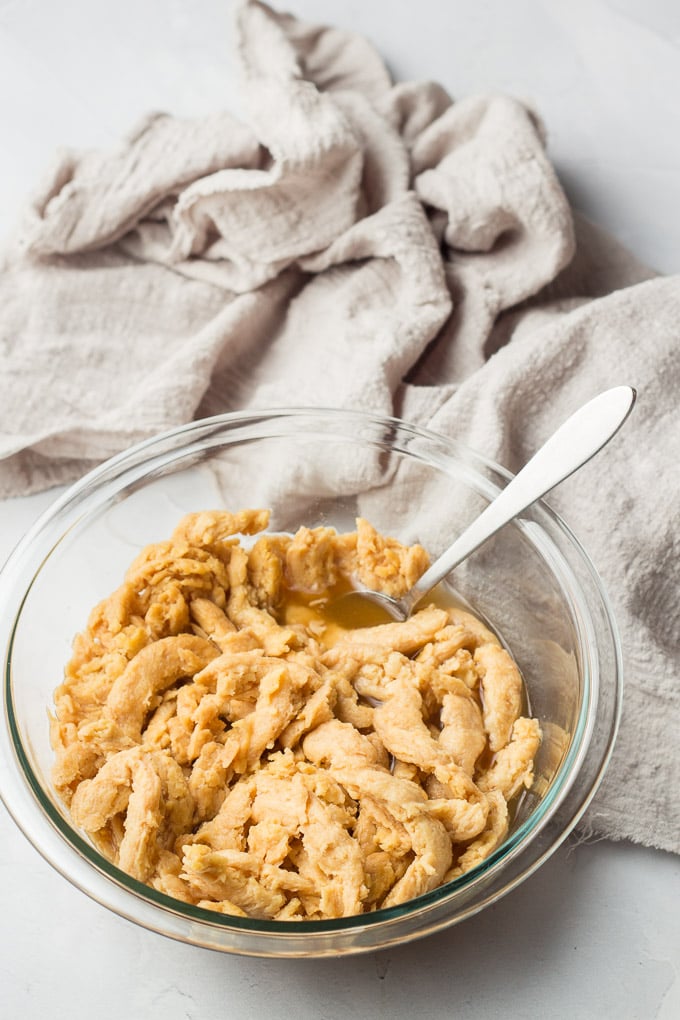 While the soy curls soak, start your sauce.

Melt some vegan butter in a skillet and add some mushrooms. Cook the mushrooms for five minutes or so on each side, until they begin to brown, then take them out of the skillet.

Add some more vegan butter, give it a minute to melt, and then add some onion. Cook the onion for five minutes or so, until it starts to soften up.

Now add some wine, bring it up to a simmer, and let it cook until almost all of it as evaporated — this should take about five minutes. 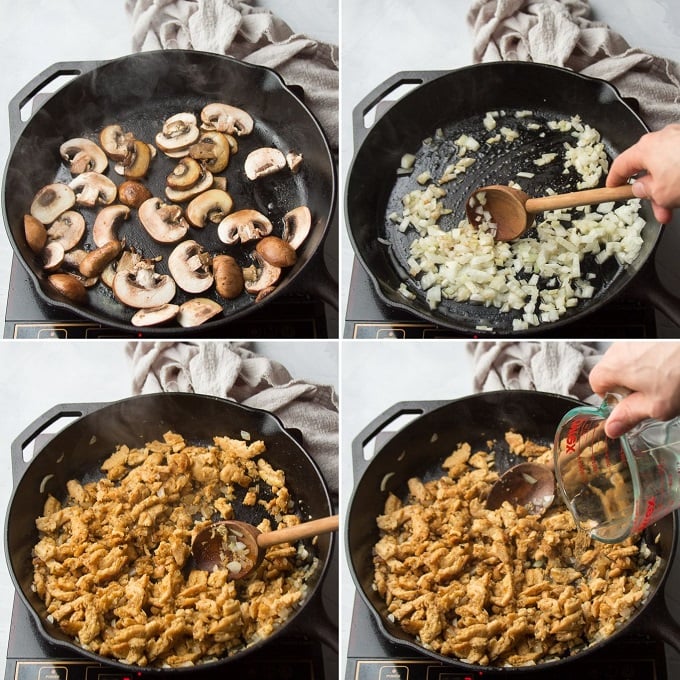 Now it’s time for some flour! You’ll want to sprinkle in just a bit at a time and stir in between additions, getting the flour to coat your soy curls and onion. Once you’ve added all of your flour, cook the mixture for about a minute.

Non-dairy milk goes in next. Again, we’re just going to add a bit at a time, and give everything a good stir between each addition. This will help prevent the flour from clumping. You can also return your mushrooms to the skillet at this point.

Once all of the milk is in, raise the heat and bring it to a simmer. Let it cook for about 10 minutes to thicken up a bit. I like to stir mine with a whisk to bread up any clumps of flour. 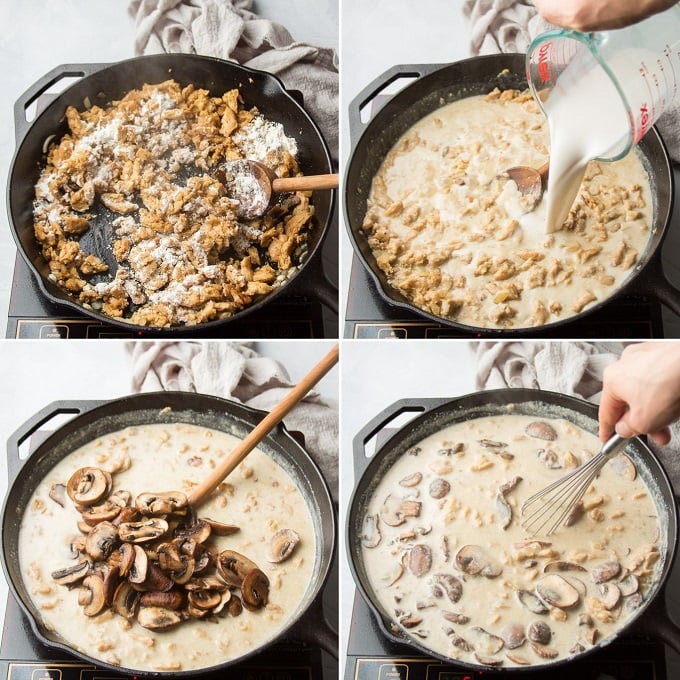 When the sauce has finished simmering you can assemble the casserole.

Arrange some cooked spaghetti and peas in a casserole dish, then pour the sauce overtop. Stir everything together until the ingredients are evenly distributed — a fork works great here!

Sprinkle your casserole with some vegan shredded cheese and panko breadcrumbs, then bake it until the sauce is bubbly.

Let it sit for a few minutes before digging in. 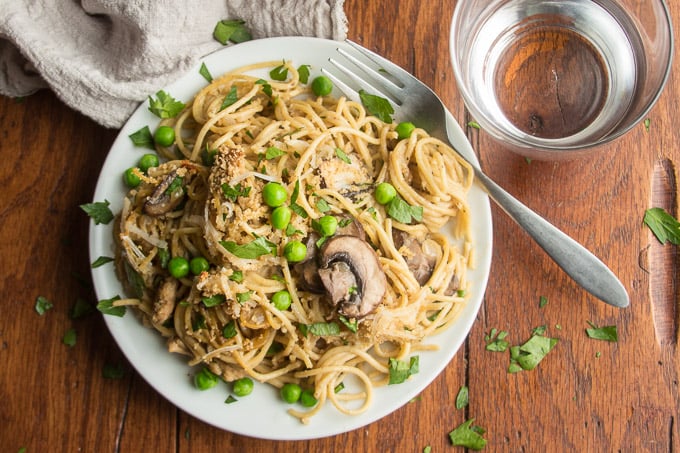 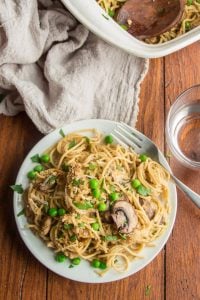