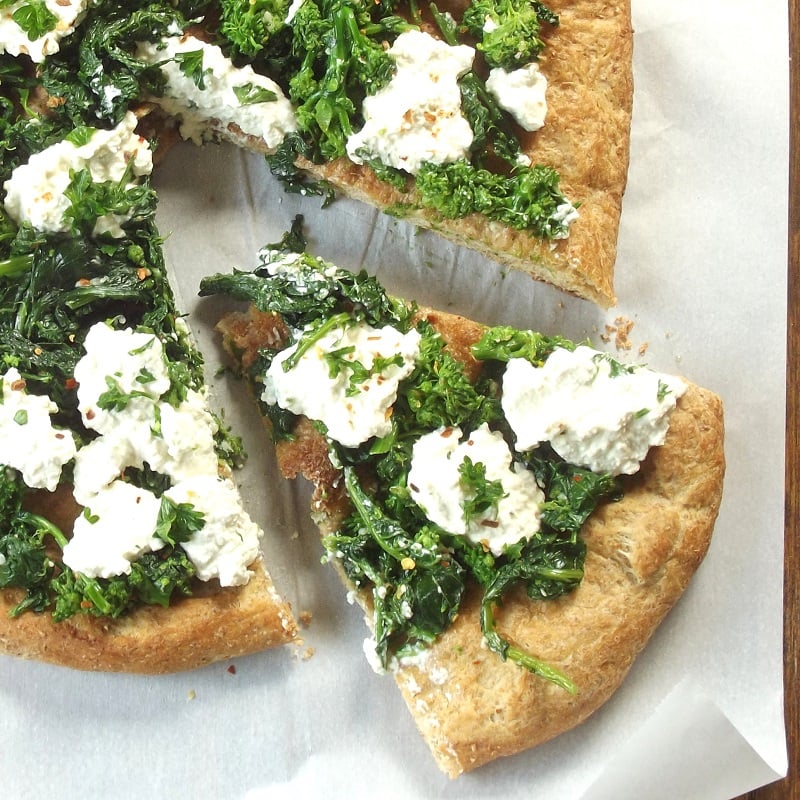 I’m happy to say that when I get married next month, it will be to a guy who loves my cooking. Healthy, meatless, vegetarian, vegan, tofu, tempeh, seitan…he’s on board with it all. In fact, salad night is his favorite. So I was a little surprised recently when he mentioned that there are a few typically non-vegan a few dishes we don’t eat really get to eat, but that he does miss. Upon asking for further clarification, he went straight to pizza.

I was happy about that, because pizza isn’t a problem. In fact, I was a little excited about it, because I’m always looking for inspiration and/or requests (that goes for anyone reading too). Vegan pizza night was due. 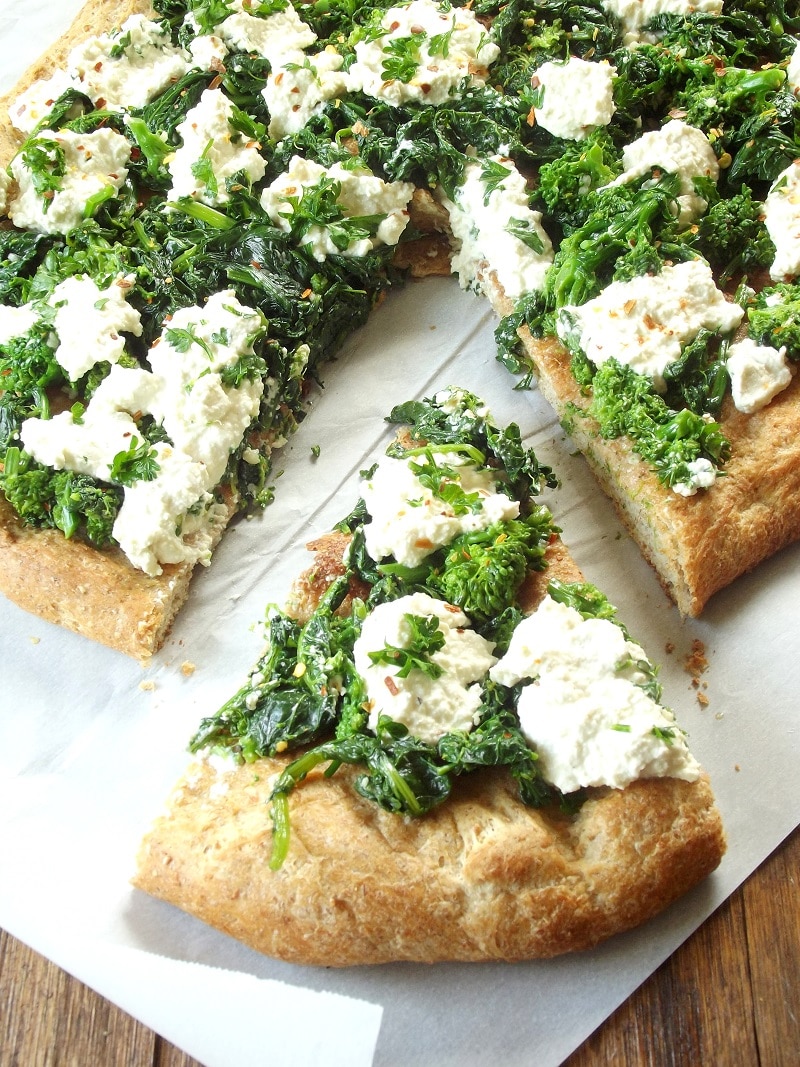 Here’s the thing though: when I started planning a vegan pizza night, I figured I’d do the easy thing and dump a bunch of veggies on a pizza crust. That’d be delicious, but it wasn’t what my boyfriend meant when he asked for pizza. Right away he started encouraging me to put some vegan cheese in the mix. I was a little reluctant…I mean, I love veggie pizza, so why mess with a good thing. I decided to soak some cashews and see what would happen.

Ricotta wasn’t really what I’d planned, and if you’ve read some of my older posts, you probably know by now that I’ve got a thing for tofu ricotta. This time it’s cashew-tofu ricotta. I blended up my cashews like I might normally do when making a vegan cheese concoction, got inspired, and threw the tofu in. The result was the creamiest, richest, ricotta I’ve ever tasted. Like, as in, creamier and richer than dairy. For real.

Straight tofu ricotta is still great. I still love it when smothered by red sauce. But when the cheese takes on more of a starring role, as it does here, cashews take it to perfection. I’m happy to say that my first cheezy vegan pizza night was my best pizza night ever.

A note on the crust is in order. I generally consider myself pretty ambitious in my kitchenery, but there are some things that just take more time than I’m generally willing to give. Pizza crust would be one of those things. I’ll make a yeast bread from time to time, if the yeast bread is the end product I’m going for. In this case, I was going for dinner, so quick and easy were top priorities. I was fortunate enough to get my hands on some vegan bread dough, which worked like a charm. You might be so lucky as to find vegan pizza dough, which would be even better, or a premade vegan pizza shell. If you’re up for making your own dough, here’s a recipe to try. Another thing I’ve done is use naan as a pizza crust. This will give you a bunch of one or two serving size pizzas, so make sure you buy about four loaves. 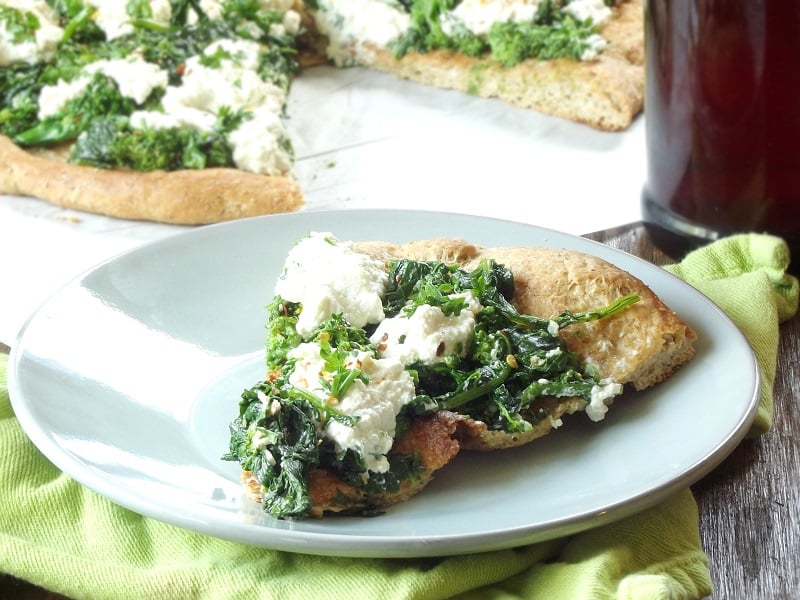 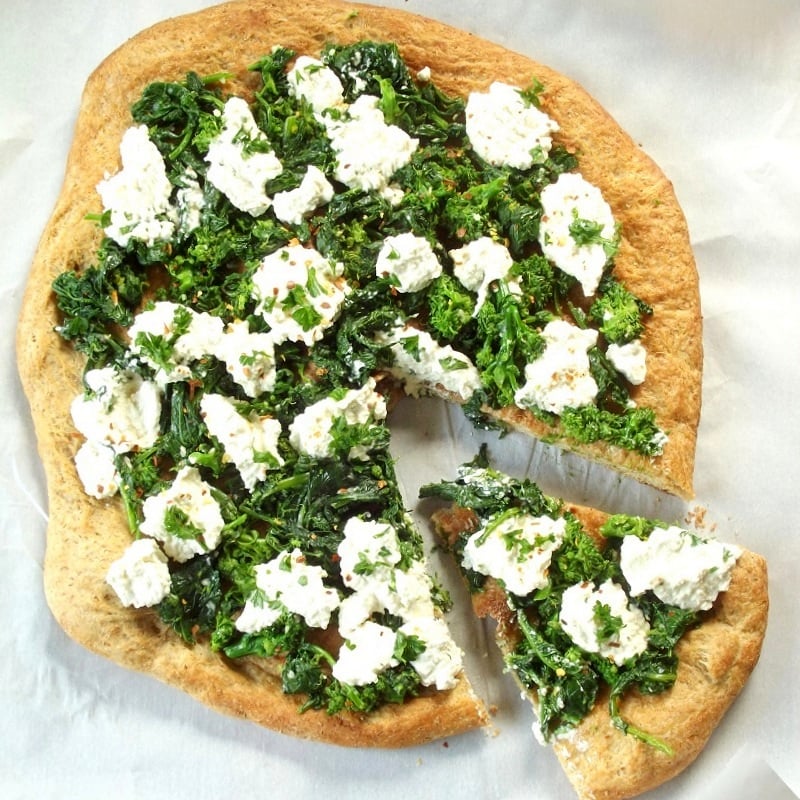 For the Broccoli Rabe

Makes 1 large pizza.
Cook/prep time does not include crust preparation.
You can steam the broccoli rabe instead of boiling, if you have an appropriate steaming apparatus, such as a bamboo steamer.
Normally I wouldn't recommend blending less than 1 cup of cashews at a time, unless you've got an itty-bitty blending device. For this recipe I've made an exception. Since ricotta is chunky, it's not a huge deal if you can't get your cashews perfectly smooth. Get them as smooth as you can. Once you add your tofu, you'll probably never know the difference. 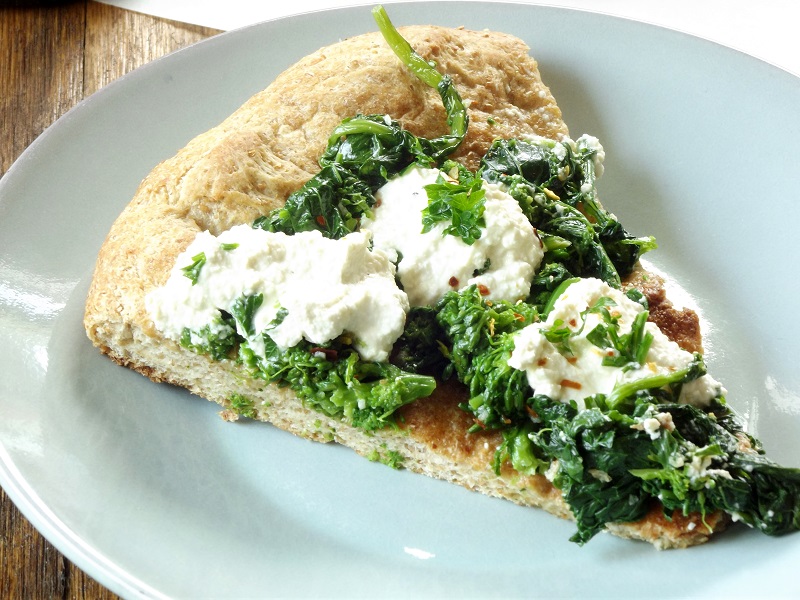