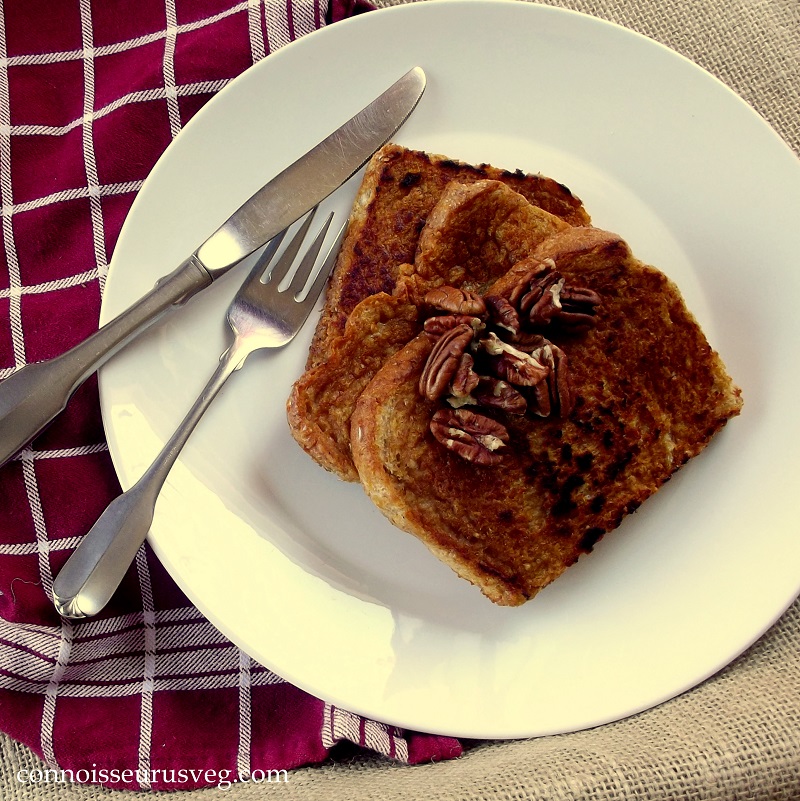 I’ve wanted to try this for such a long time. Once I discovered the amazingness of banana French toast, I realized there was so much French toasty goodness that I could achieve without eggs.

Let me backtrack a bit. Most of my regular readers are probably aware of the fact that all of my posts are vegan at this point, while my diet is largely, though not completely, plant based. You guys may also know that while I may get a hankering for an ice cream cone or cream cheese bagel from time to time, one thing I have no problem doing without is eggs. I’ve never liked the taste or texture. I’ve never been a fussy eater, but my mom tells me that I used to spit eggs out when I was a baby. 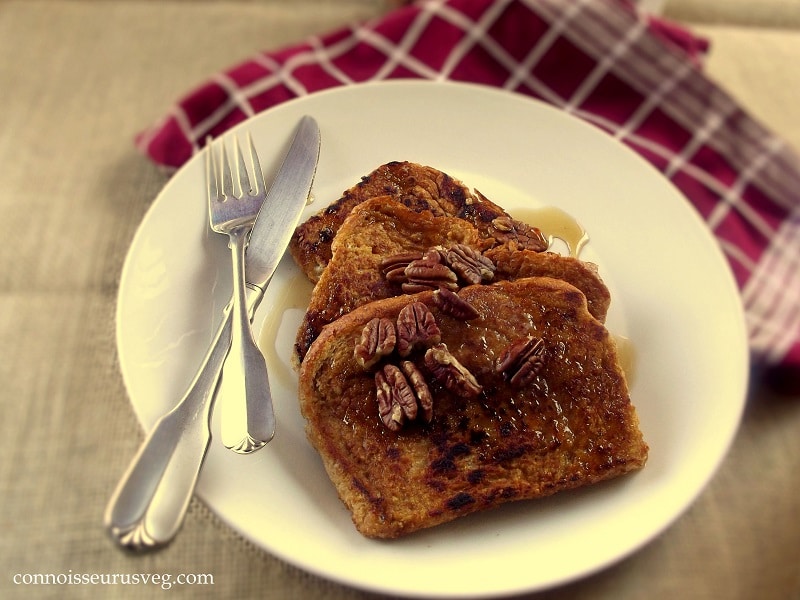 I tried to like conventional French toast, but could never get past the eggy taste, no matter how subtle. Then, during my early teens, a friend taught me about grilled bread. Yes, grilled bread. It’s like a grilled cheese without the cheese, or French toast without the egg. Butter (or margarine) up a slice of bread, and grill it up. And guess what? This is actually good. At least, it was actually good to me as a fifteen year old without a food budget of her own, then good again as a poor college student who couldn’t afford cheese to put between yon grilled bread slices.

So of course, when I heard about banana French toast I knew it had to be good.

Then there’s the added bonus of that little caramelization you get from the banana. When banana French toast turned out to exceed all expectations, I realized there was so much more I could do with this concept. The next logical egg substitute, for me, was sweet potato. Why’s this? For one, I was aware that sweet potato works as an egg substitute in lots of baked goods, much like banana. For another thing, like the banana, it’s also got some fantastically caramelizable natural sugar, which has to make for deliciousness. It’s mashable and blendable, so you can get a nice French toasty batter. And finally, what could possibly be a better compliment to that maple syrup and cinnamon you’ve got all ready to pour onto your French toast. 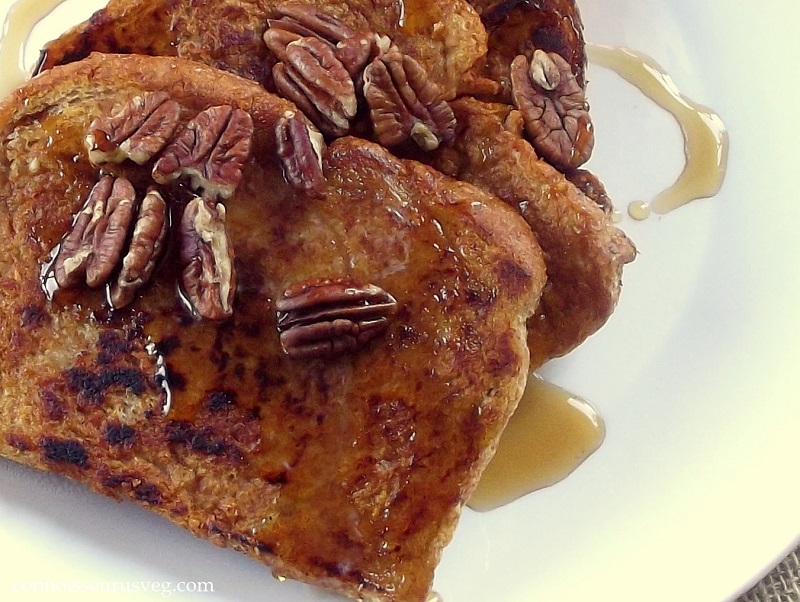 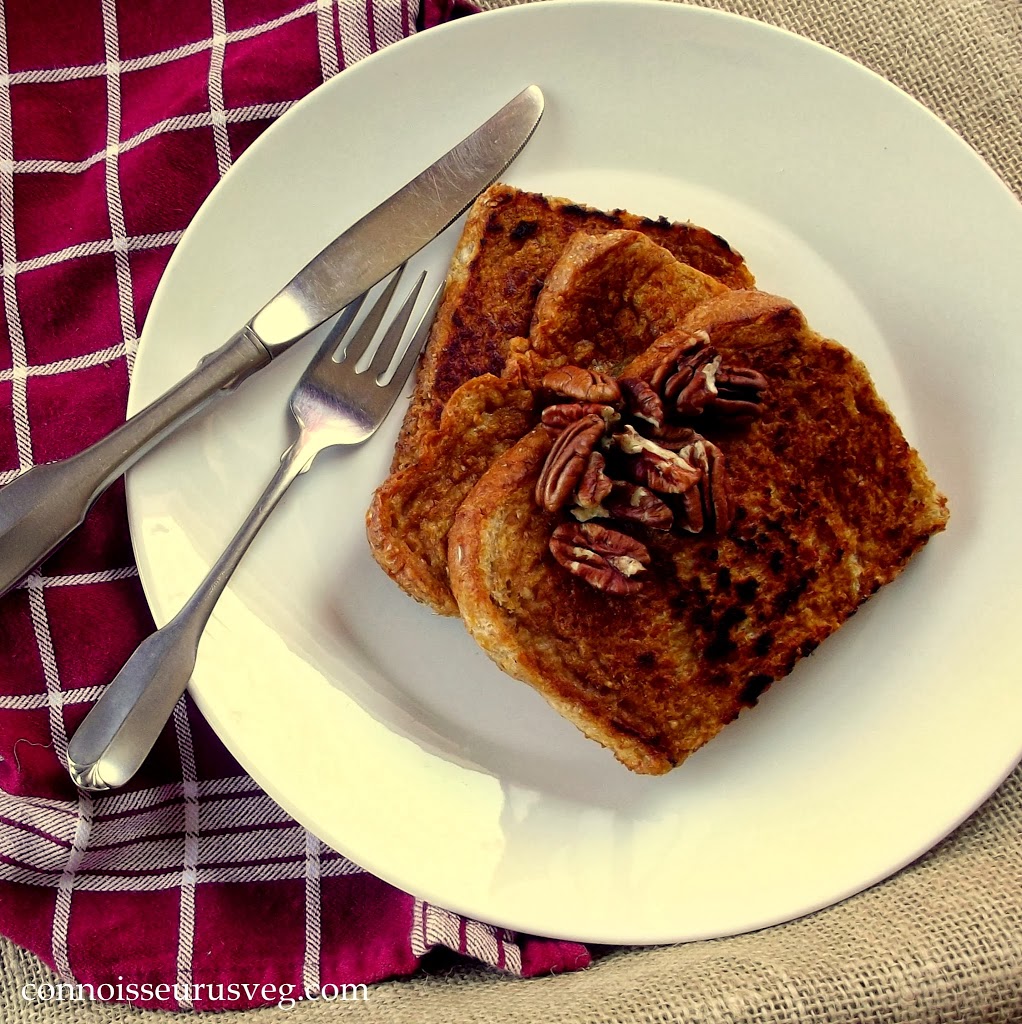 Cook time is based on the microwave option for cooking the sweet potato.