This savory vegan chickpea scramble is made from a chickpea flour batter that’s scrambled up with garlicky sautéed spinach and mushrooms. 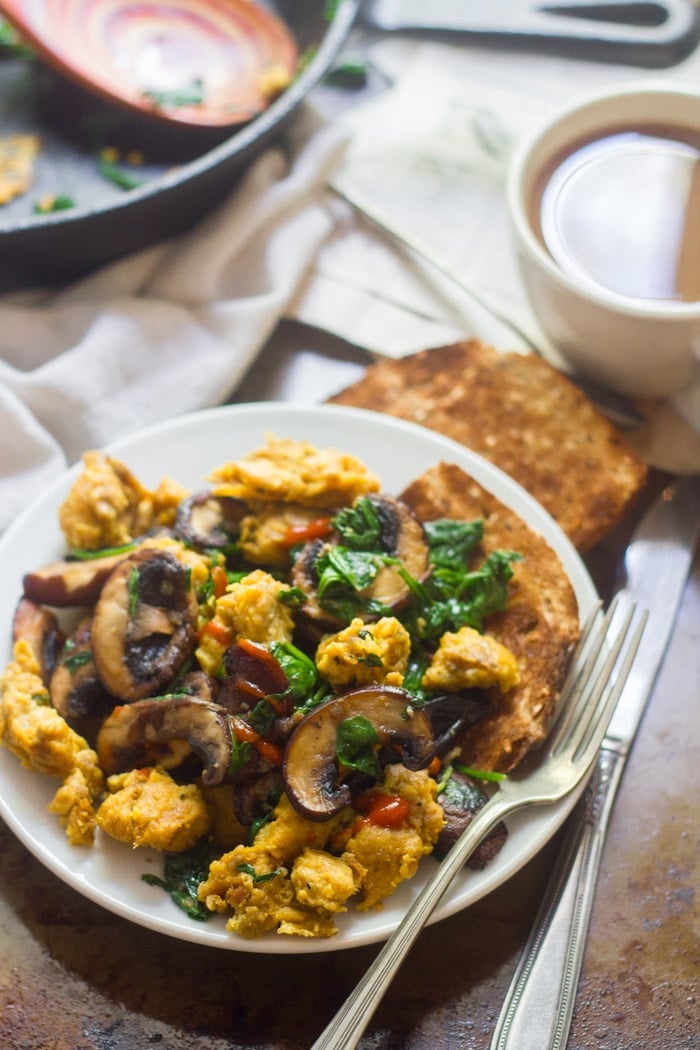 Alissa’s note: This post was originally published in November of 2014. Hence all the talk about snow! I just updated the photos and made a few tweaks to the recipe. It’s not actually snow season yet, but this post does have me really excited for it. :)

I know some of you guys are going to scoff at this (mom), but I’m really excited about how cold it’s getting outside. This morning I saw a bunch of snow-covered cars in my neighborhood. There was no actual snow on the ground in my neighborhood, but about a mile down the road they’d gotten a nice coating. We’ll get ours soon enough. I’m sure of it.

Since we’re talking about winter (assuming you haven’t clicked away in disgust), let’s talk about winter food. When it starts to get cold out is when I start to really crave hot and hearty breakfasts. 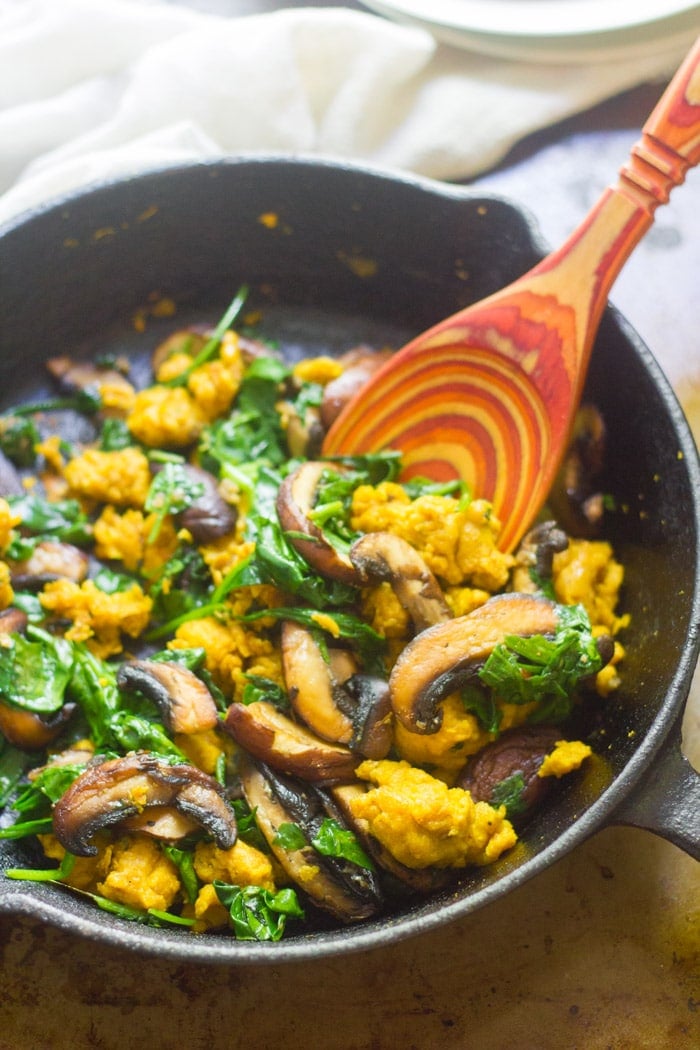 I love savory vegan breakfasts and have been meaning to do some more playing around with chickpea flour for a while now.

My husband is the expert egg cooker in our house, and mushrooms and spinach are among his favorite scrambled egg stir-ins, so I figured I’d try them out here. 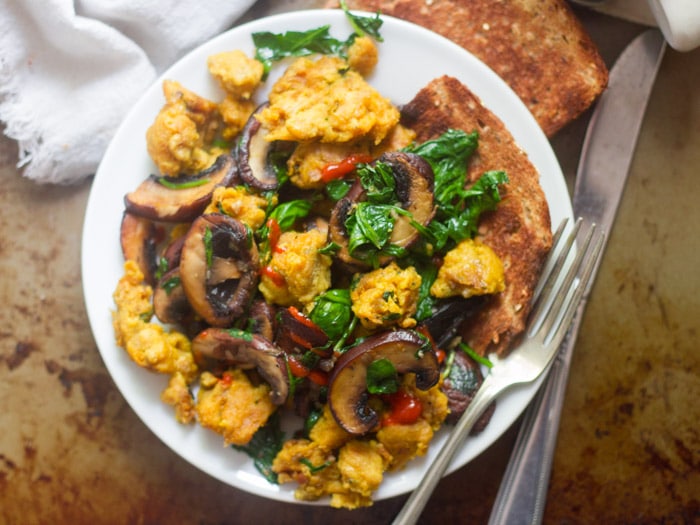 Every time I make something with chickpea flour, I tell myself I don’t make nearly enough things with chickpea flour. There’s something incredibly satisfying about biting into just about anything made with this stuff. It’s also insanely filling. I’m vowing to put it to more good use over the course of the colder months — it seems like a very wintry food to me. Did I mention that it’s filling? I think I was pretty much set until, like, dinnertime on the day I made these. 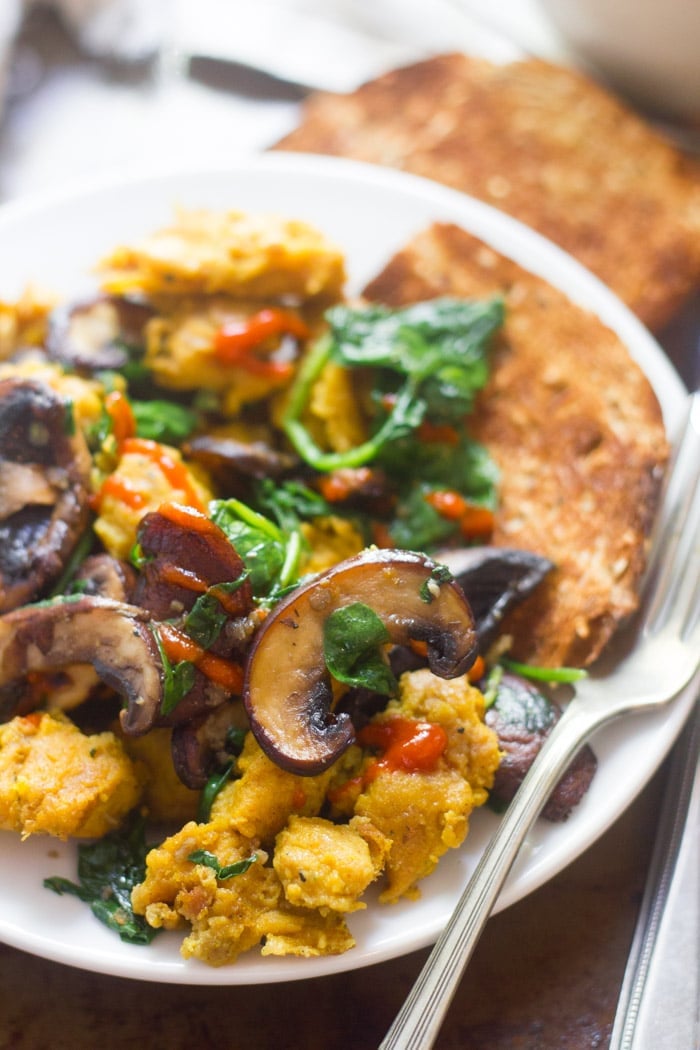 The other thing I love about this chickpea scramble is that you can do pretty much whatever you want with it, kind of like scrambled eggs. If you’d be inclined to eat your scrambled eggs plain, do that with your chickpea scramble. If you like them on toast, that works too. My favorite way to eat this though, is in a burrito. (Which I would have included in the pictures, if not for the fact that burritos are the hardest thing on the planet to take a nice picture of.) Whichever way you choose to eat these, a little hot sauce rounds off the savory in these with some spice. 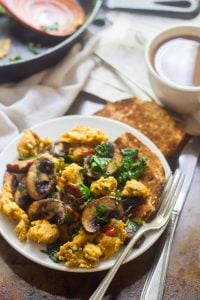 Use a good nonstick or well seasoned cast iron skillet, as the chickpea batter has a tendency to stick.