This spicy Moroccan chickpea stew is made with a creamy base of pumpkin and coconut milk, and served atop a bed of tender couscous.

So, it's the holidays. I must be a little bit beat, because I'm definitely off my game with the last couple of recipes. Last week it was the crooked quiche. This week, the stew that I ruined. Oh, it was delicious, but then totally I ruined it before dinner. Let me explain.

I made the recipe, loved it, then broke it. I did get to eat a little bit for lunch, so it's not that bad. My husband and I split that bowl of stew you see in the photos - we usually do that after I've cooked and photographed a blog meal on a weekend afternoon, planning to save the rest for dinner. Typical me, I also left most of the kitchen cleanup for dinner time, so as I had the stew reheating on the stove, I began shoving spice jars into my overstuffed cabinet. One busted free, fell, and smashed into a drinking glass I had perched on the counter. Gah!

Glass went everywhere, and I mean everywhere. For a minute I didn't even realize I'd had a drinking glass sitting on the counter (did I mention that the kitchen was messy?), and was completely baffled at the volume of glass pieces that littered my kitchen. I probably would've been pretty impressed had it not destroyed my dinner.

For a few minutes I just stared at my stew. I couldn't see any glass in it, but I could see glass everywhere else. You know the feeling? I know this isn't the first time this has happened in my kitchen. Finally I caved and ditched the whole pot of stew. It hurt. We settled on some quick veggie wraps in it's place.

This was easy enough to make that I almost made an entirely new batch, even at 7:30 at night, being as hungry as I was. Unfortunately, I'd totally used up all the chickpeas in the house when making batch number 1, which is crazy, because I usually have an endless supply of chickpeas.

So yeah. That's my story. I'll probably make this again at some point over the winter. It was easy and the little bit that I got to lunch on was delicious. 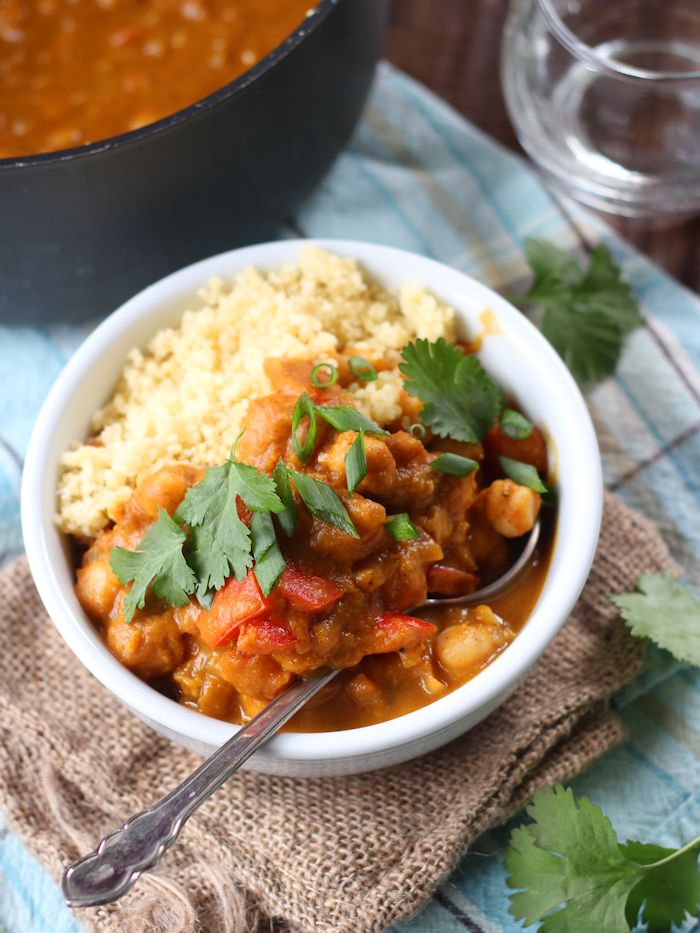 Nutrition information does not include couscous or toppings.