Can falafel possibly get better? Yup, if you stuff it in a pepper and serve it up with some saucy goodness! These sweet bell peppers are stuffed with a blend of hearty millet and chickpea falafel and roasted up till tender in a bath of spicy tomato sauce. 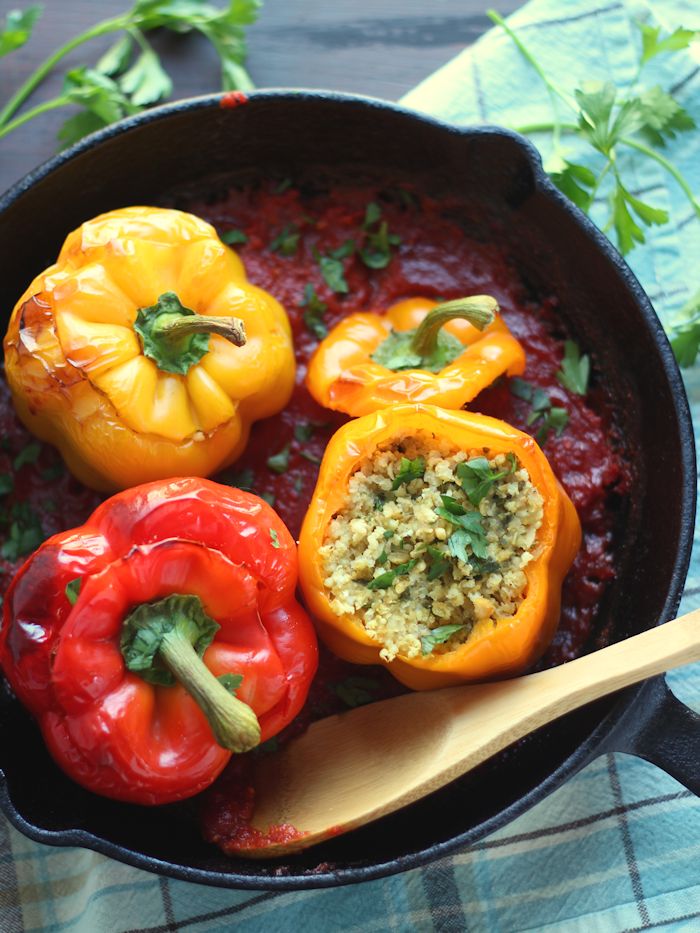 Can one ever really have too many falafel recipes? Apparently not, as far as I'm concerned. It's also looking like I'll never get tired of stuffing falafel-esque things into stuffable veggies. I hope you're game!

This is one of those recipes that I thought would be great, but ended up turning out not exactly as I expected, but also a billion times better. That happens every so often. I'll get started with an expectation and veer off in a totally different direction when I spy something in the pantry that needs a little love. This time around, I initially expected to stuff some peppers with basic falafel and top it with standard tahini sauce. I'm sure that would've been nice, but once I started cooking I got inspired to whip up a quick spicy tomato sauce to use in combination with the tahini drizzle. I was really happy with this decision, even if it did take the dish somewhere totally unanticipated. My stuffed peppers ended up being super cozy and comforting, and took on more of a Greek cuisine feel, though I'm definitely not claiming these as authentic anything.

My other diversion from the original plan was to add in some millet. Falafel is great, and while stuffing peppers with falafel is a great idea, I got to cooking and started to think a great mass of never-ending falafel in the middle of a pepper might be a bit much to navigate through. I wanted some texture to break things up. That's where the millet came in. I had success in the past with quinoa falafel, so I thought it was time to give millet a try, and fortunately I had a big old bag of millet on hand, which Bob's Red Mill was nice enough to supply me with.

Millet falafel turned out to be the perfect stuffing for my peppers. It added just the right amount of texture to make things interesting, was super easy to prepare, and resulted in a dish that's fully doable for all of my gluten-free readers. My local supermarket carries millet, so there's a good chance yours does too. If not, you can get some online, directly from Bob's Red Mill.

P.S. These little guys are perfect for holiday celebrations. They're cute, delicious and totally festive. 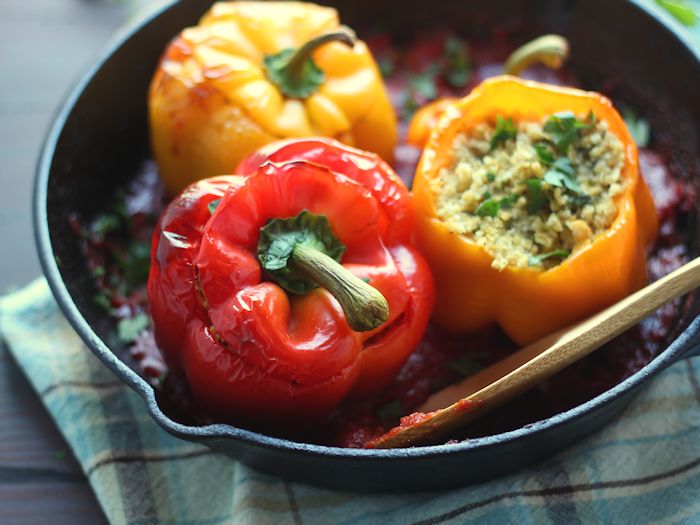 Can falafel possibly get better? Yup, if you stuff it in a pepper and serve it up with some saucy goodness! These sweet bell peppers are stuffed with a blend of hearty millet and chickpea falafel and roasted up till tender in a bath of spicy tomato sauce.
Course Entree
Cuisine American, Mediterranean
Prep Time 15 minutes
Cook Time 50 minutes
Total Time 1 hour 5 minutes
Servings 4
Calories 380 kcal
Author Alissa

For the Spicy Tomato Sauce

For the Millet Falafel Stuffed Peppers

Choose bell peppers that are nice and flat on the bottom, so they stand up during roasting.