A mix of tender maple roasted Brussels sprouts and butternut squash are topped with crunchy pecans and coconut bacon to make this flavorful vegan side dish!

This was a very carefully planned out recipe. I'm beginning to realize that some delicate engineering is required wherever coconut bacon makes an appearance. Oh, not because coconut bacon is terribly tricky or anything. It's actually one of the easiest things on the planet to make. The problem with making coconut bacon as an ingredient in some other recipe is that it often doesn't last long enough to actually make it to that other recipe.

A sheet of coconut bacon cooling and crisping up on my countertop will call my name from whatever tucked away recess of my home I happen to be in. That's just the way it is. Also, coconut bacon has a sweet spot when it comes to the best time for eating it. When it first comes out of the oven, it's too hot to eat and enjoy. As soon as it cools it reaches a point of maxiumum crispness, all while the smell of smokey maple goodness is still wafting through the house. That's the time to eat your coconut bacon. Unless your planning on sprinkling it on top of some maple roasted Brussels sprouts and butternut squash. Then you've got dilemma.

I crafted this recipe with that very dilemma in mind. Roast your coconut bacon and veggies together, remove coconut bacon from oven, at which point it's too hot to eat. Allow it to cool, and by the time temptation begins to pose a problem, your veggies are ready to go, and it's totally okay to eat your coconut bacon, because you're eating it over your veggies, which was the plan all along, thank you very much.

Seriously though, it all works out very well, and this turned out to be the most perfect flavor and texture combination ever. If you're not into Brussels sprouts, this is the Brussels sprouts recipe for you. The sweet maple and butternut flavors take the edge off the bitterness, while the coconut bacon adds the perfect dose of smokey to compliment the sweet. Is this why everyone who eats meat is so obsessed with bacon? Maybe I'm beginning to get it after all. Coconut bacon certainly makes everything better. 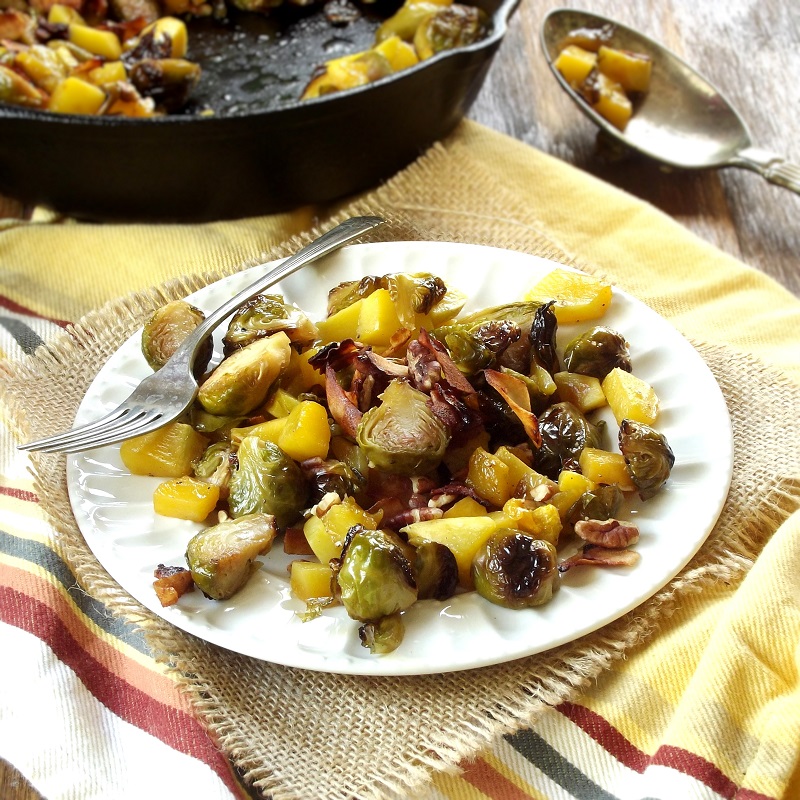 Obviously, you don't have to bake the coconut bacon at the same time as your veggies, but don't say I didn't warn you. If you've already got some coconut bacon lying around, just follow the recipe but skip the parts pertaining to coconut bacon prep. Also feel free to use store bought coconut bacon if it's available.