These sweet red pepper and mango sushi rolls are totally vegan, positively delicious, and easier to make than you'd think! 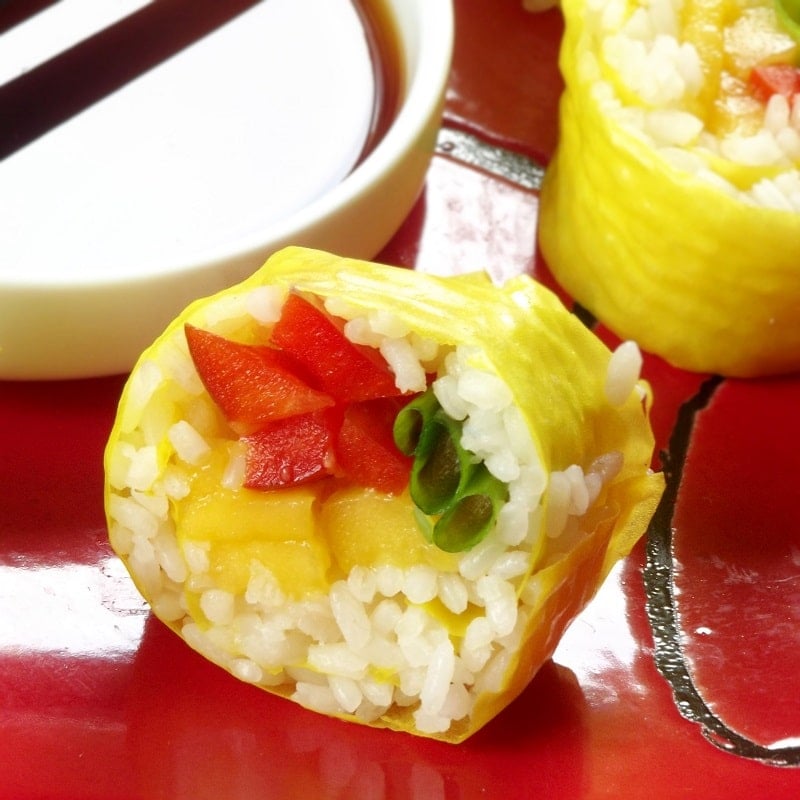 My mom called me recently to tell me that she finally took the plunge and tried some veggie sushi. "Sushi is good!" Hmmm. Well, I'd been trying to tell her that for nearly fifteen years (since a day when she brought me some veggie sushi, thinking it'd be something I might like).

In view of my mom's call, and some reader comments and questions indicating that I get that there's a definite apprehension when it comes to sushi, I thought this post was in order. Start where appropriate for you. If you're a sushi pro and just want the recipe, scroll down. Otherwise, stick with me.

Let me preface this by saying that I'm by no means a sushi expert. I don't know all the right terminology and I sure as heck still end up rolling some hideous sushi from time to time. I'm great at eating sushi though, and over the course of a few months I went from being completely intimidated by the idea of rolling sushi, to having enough confidence to come up with my own recipes, photograph the products, and publish them online. If you're a sushi newbie, I can certainly help.

Veggie sushi has the advantage of inherently lacking the number 1 apprehension that most people deal with, which would be raw fish.

The second biggest apprehension is seaweed. Personally, this never bothered me. It's a plant. It grows in water instead of on land. Big whoop.

I can understand how some might not like the taste of nori. Believe me, I know. I've had some unpleasant tasting kitchen mishaps involving making nori chips that turn out something like burnt, fishy tasting paper.

When eating sushi, quality nori is key. A good restaurant will use good nori. That's it. If you've tried other things on the menu and seen positive reviews on the place from others, give the sushi a try. In good sushi that's prepared with good nori, the taste is so mild and the texture so delicate you might not even notice it at all. What constitutes good nori? The truth is, I don't know, but that's never been an obstacle. When I purchase nori for homemade sushi I just go to the Asian market and ask the staff for recommendation. It works.

Another thing to do if you're not quite on board with seaweed yet is to order uramaki, also sometimes referred to as an "inside out roll." In uramaki, the nori wraps the filling, and rice wraps the nori, as opposed to the nori being wrapped around the rice. Check out this roll as an example of uramaki. In uramaki, the nori is tucked away on the interior of the roll, so there's less of it, and it's less detectable.

Finally, you might be able to skip the nori altogether. After getting some questions on nori alternatives concerning my past recipes, I decided to explore a bit. I discovered soy wrappers, which I've used in today's recipe. The flavor was mild and the texture smooth, so these might be  good choice for nori haters who wish to move on to making their own sushi.

If you can find a veggie friendly version, you could also order nigiri when dining out, which is a ball of rice with a topping draped over top (as opposed to maki, which is the rolled types of sushi we've been talking about up until now).

The other big variable when it comes to eating sushi is filling. This part is easy. For me, it's pretty much a guarantee that the amount of enjoyment I get from eating any given type of roll is proportional to the amount of enjoyment I'd get from eating the filling on it's own. Will I enjoy eating a cucumber roll? Yes, but to about the degree I enjoy eating a plain old cucumber. How about a roll stuffed with pan-fried spicy eggplant? Yup! Spicy eggplant on it's own sounds pretty awesome, so spicy eggplant sushi probably will be as well. Obviously, there are exceptions, mainly pertaining to delicious foods that just wouldn't go with sushi fixings, but you get the idea. So if you've tried a plain veggie roll and been unimpressed, consider seeking out a place that has some more interesting vegetarian rolls. I'm seeing more and more tempura-avocado-peanutty-pickled goodies stuffed into sushi. Go out and find some of that deliciousness. 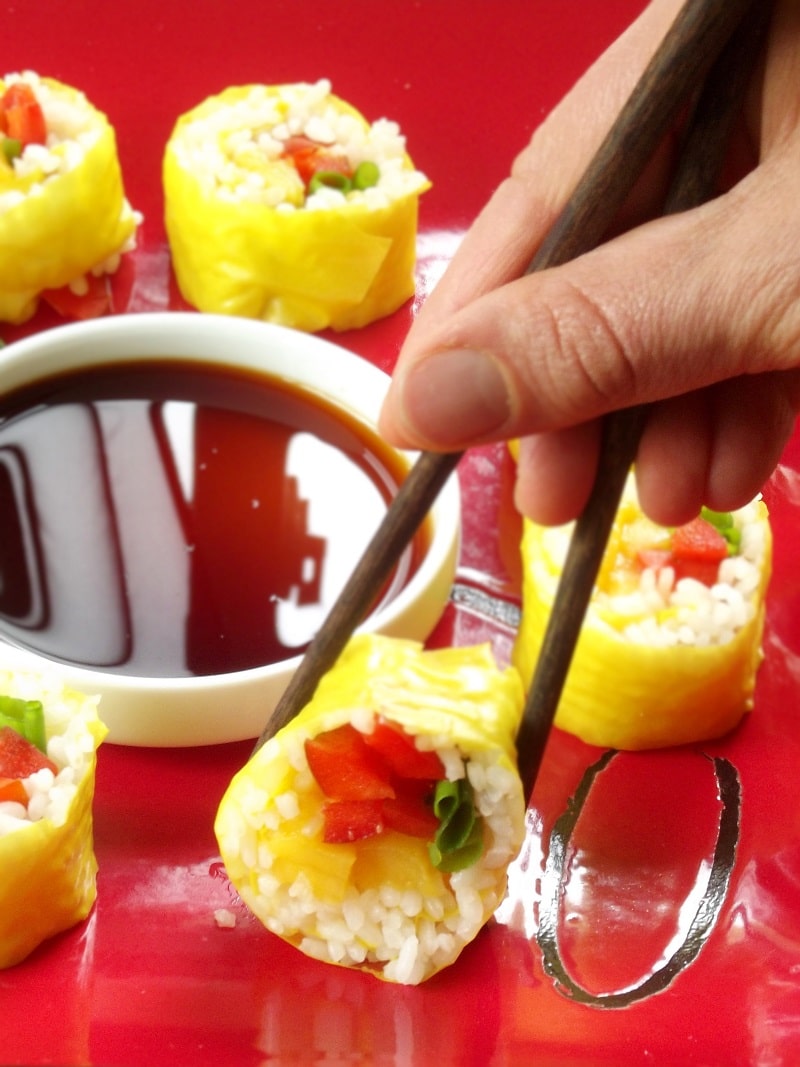 After an initial fail at sushi rolling, it took me forever to get up the courage to try again. It turned out that I didn't need to be so nervous, because (1) rolling isn't as hard as I thought, and (2) I didn't actually need to roll anything.

Let's start with not rolling. If you want to explore different sushi flavors at home without rolling, you've got options. The easiest would be a sushi bowl. I love this idea. You cook up some rice, stick it in a bowl with some sushi toppings and drizzle with dressing. Nothing scary about that! There's a bunch of recipes for this type of thing, but if you need a place to get started try here, here or here.

Once you've got the sushi bowl down, try a few other options that don't require rolling.

Or some homemade vegan nigiri.

Or get yourself a sushi mold, and use it to shove your ingredients for any sushi recipe into a neat little box. I have a friend that swears by these things.

Ready to roll but not ready to invest in a mat? Use a dish towel.

Once you realize how much you love DIY sushi, then get yourself a mat.

Okay, still with me? I taught myself to roll sushi with YouTube. That's it. No classes, totally free, and it took a single attempt at rolling along with a video to get decent looking roll.

Here's the video I used.

Then I moved on to the more challenging inside-out roll using this video.

Start with something simple. The first video demonstrates a cucumber roll, and that's a great way to go. Fillings do make a difference, and you want to stick with firmer items for the most rollable sushi. I've tried no less than a half dozen times to stuff kimchi into sushi, and it always ends ugly. Know what's great though? Even ugly sushi tastes good!

Today's recipe is a good beginner sushi rolling recipe. The fillings are easy to work with and delicious and the soy wrappers are a bit sturdier than nori.

So there you have it. I hope my sushi journey helps make yours a little easier. 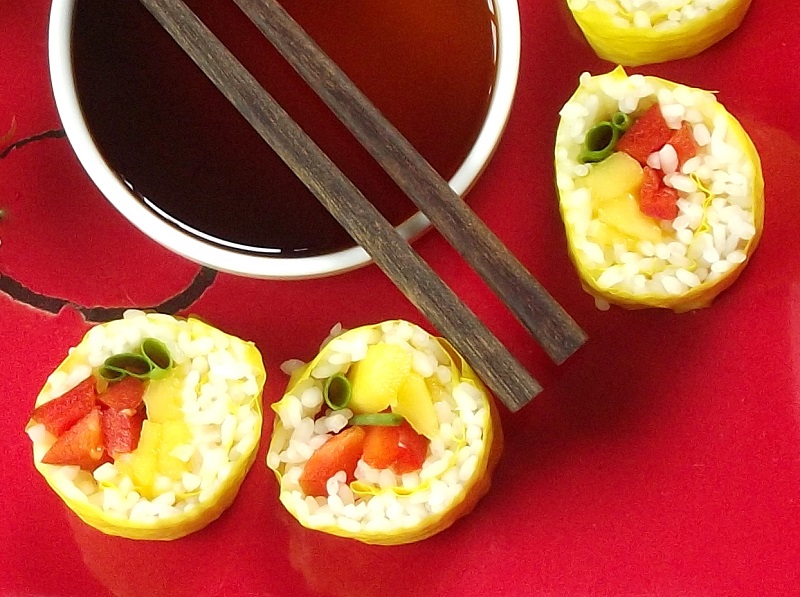 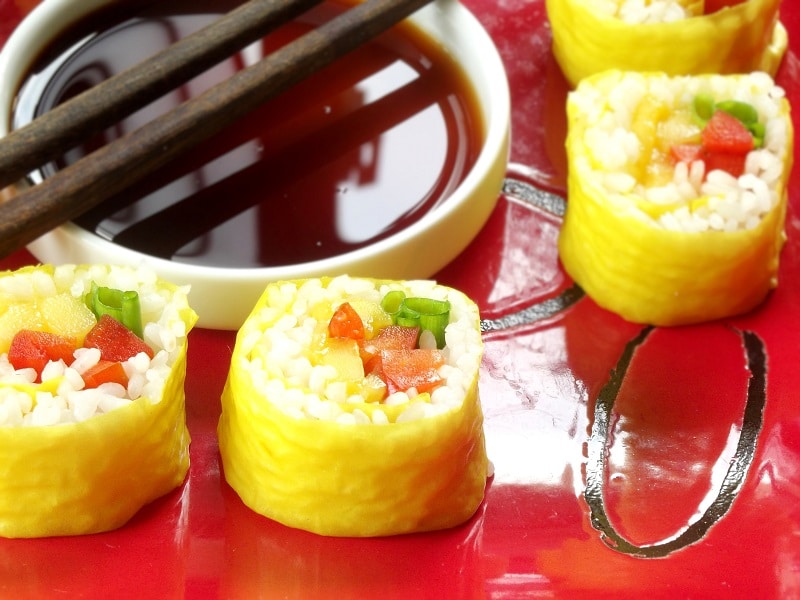