Creamy whipped black beans are slathered onto bread slices that are stuffed with baby spinach, juicy tomato slices, and smoky tempeh bacon to make these hearty and flavor-packed vegan sandwiches.

So that's how I ended up with this whole black bean sandwich idea. It's not as weird as it sounds! I made a couple of grilled vegan sandwiches using avocado as the gooey stand in for cheese (here and here). Then I moved on to beans. I even made a couple versions of vegan quesadillas using beans and avocados. I was playing around with the idea of a vegan grilled BLT, wondering what I should use instead of cheese when it hit me that a Tex-Mex inspired black bean filling would be awesome.

These were some of the heartiest, most satisfying, flavor-packed vegan sandwiches I've ever eaten. Next time someone accuses you of eating nothing but bird food as a result of your vegan diet, feed them this sandwich. It's insane.

The beans get whipped up in the blender with some cumin and lime, although if you're feeling a little lazy I bet you could get a way with hitting them a few times with a fork or potato masher. Then, they're slathered on both slices of bread — this is the key to keeping the sandwich together! Top if with some tempeh bacon, juicy tomato slices, and spinach (or your favorite sandwich greens!). You'll end up with one heck of a flavor-packed vegan sandwich that's super filling to boot — I wasn't hungry for a half a day after polishing off this sucker. 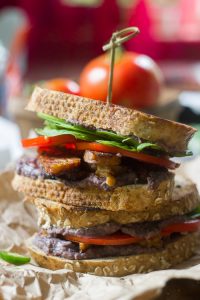 For the Black Bean Filling