Sweet roasted beets are tossed in a zesty orange dressing with crunchy pecans to make this scrumptious salad!

I recently found out that I've been running low on iron for a few months. I came damn near to passing out during one of my morning classes not too long ago. That was when I realized I needed to get my levels checked, and I was actually relieved to find out that I was low. It's generally better to have a problem that can be fixed than to think I've just passed my peak and need to cut down on the back bends. Through diet and supplementation I've gotten myself to a point of feeling a lot better. In fact, I now go to my morning yoga class and want to laugh at myself of a few months ago for thinking it was the early hour that made it so difficult. Things are so much easier now. Yay!

I got myself feeling better with supplements and diet, but all the while attempting to lean more in the diet direction because that's always better, right? This recipe was part of that attempt, but was initially a bit of a goof up. You see, for a long time I was under the mistaken impression that beets were the thing to eat if you wanted lots of iron in your diet. Makes sense right? Beets are red, iron is red, we use it to make red blood cells. As it turns out, most of the iron found in beets is actually in the greens, which also makes sense because leafy greens are knows as good sources of iron. Here I thought I was doing a good thing and being thrifty by buying beets without the greens. What I do know is that vitamin C enhances iron absorption, so in order to save the blood enriching properties of this dish, I served it over spinach, and was pleased to find that that is exactly how it should be served. You know, for maximum deliciousness, in addition to nutritiousness.

The beet portion of recipe is my version of something I used to get at the Whole Foods salad bar. I always really dug the combination of the hard wintry beets and the tangy citrus. I modified the dish over the whole foods version a bit by roasting the onions. The sweet, roasty, caramely flavor makes this more of a hearty winter pick-me-up type salad. 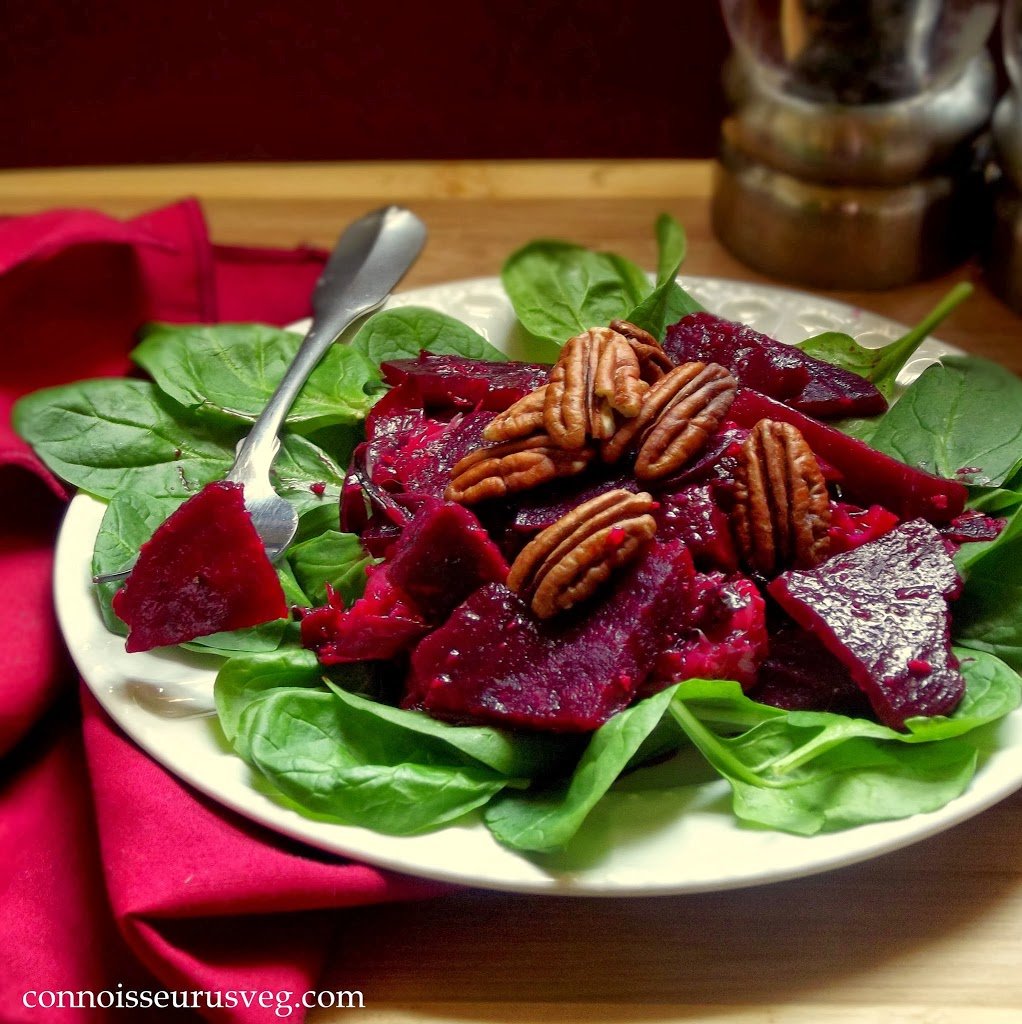 Sweet roasted beets are tossed in a zesty orange dressing with crunchy pecans to make this scrumptious salad!