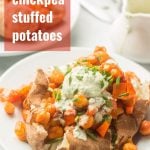 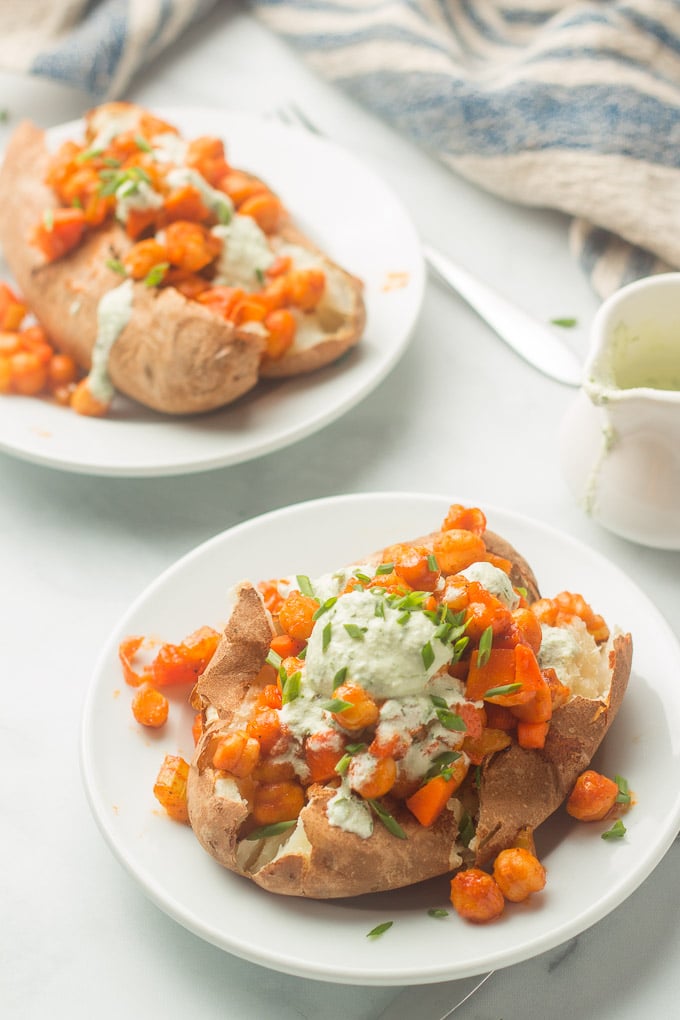 January has been an epic month of recipe fails for me. It's been rough, and made even worse by the fact that I slacked off over the holidays and got behind on recipe development, thinking I'd catch up during the new year. Well that hasn't happened so far!

So I ended up scrapping a few of my recipe ideas that just wouldn't work, and instead turned to something simple, tried, and true.

I first posted the recipe for these vegan stuffed potatoes back in 2014. I think I was having a rough spell with recipes back then as well, but I remember being so satisfied with how easy these potatoes came together and how delicious they turned out. Now seemed like a good time to revisit the recipe and update the blog post with some better looking photos. 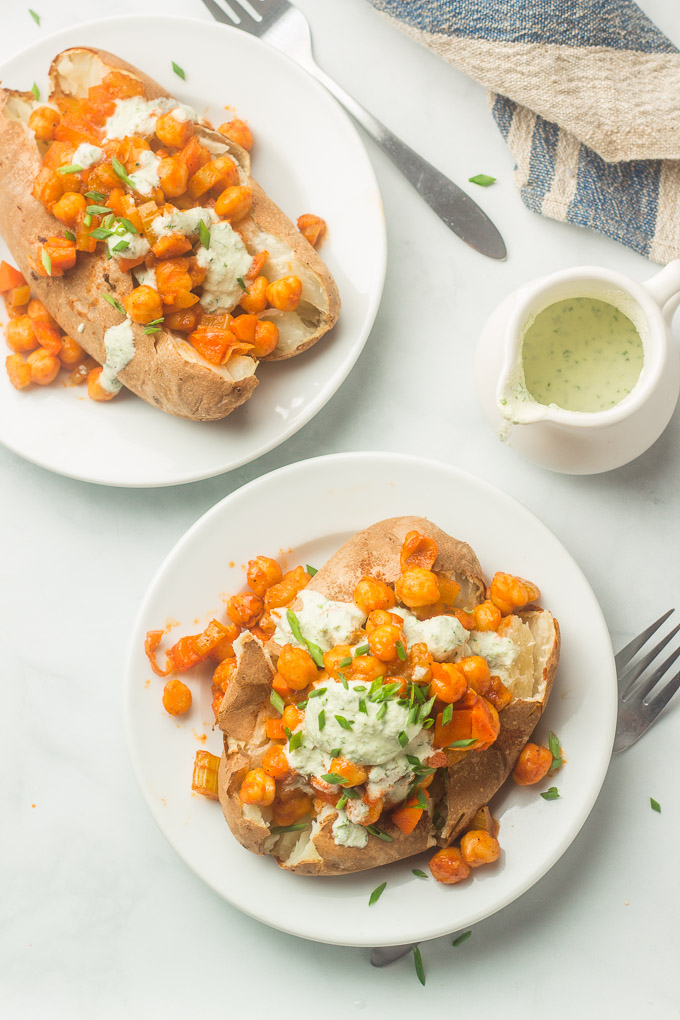 But! Vegan butter is a thing, so if you want vegan Buffalo sauce, all you really need to do is substitute vegan butter for the dairy-based stuff you'd find in conventional Buffalo sauce.

For this recipe I simply used vegan butter to sauté the veggies and chickpeas, thus keeping the amount a bit less than what you'd normally find in Buffalo sauce. It's still totally delicious. Trust me. 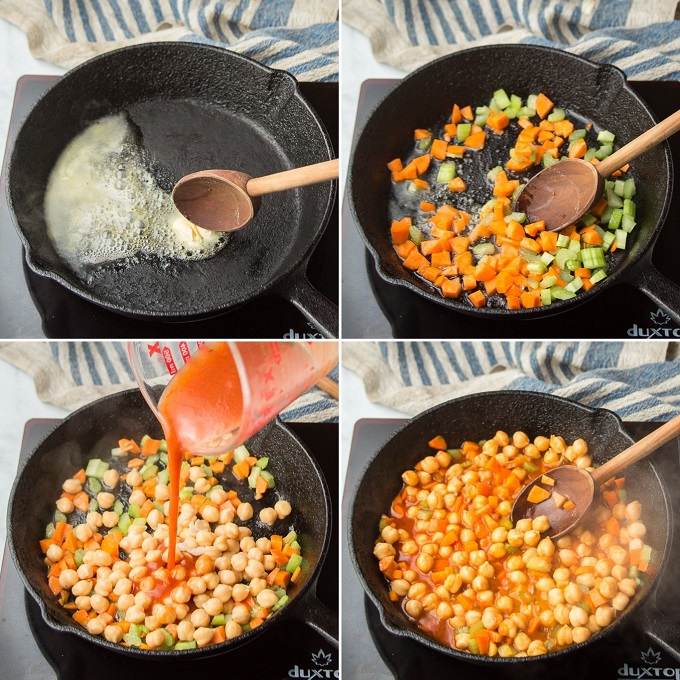 First, bake your potatoes. This can take a while, but fortunately most of the process of baking a potato is hands-off. Just scrub them, poke a few holes in the skin, and pop those potatoes into the oven for about an hour.

I like to start on the chickpea filling when the potatoes are almost done baking.

Melt that vegan butter in a skillet and give it a minute to heat up. Now add some diced celery and carrot. Cook the veggies for a few minutes. I like to keep them a bit on the crunchy side.

Next, add your chickpeas, hot sauce, and a tiny bit of maple syrup. Stir everything up, bring the sauce to a simmer, and let it cook until it thickens up just a bit and coats the chickpeas.

When the potatoes are done you can slice them open and stuff them with the chickpea filling. I like to top mine with some cashew cashew ranch and fresh chives. 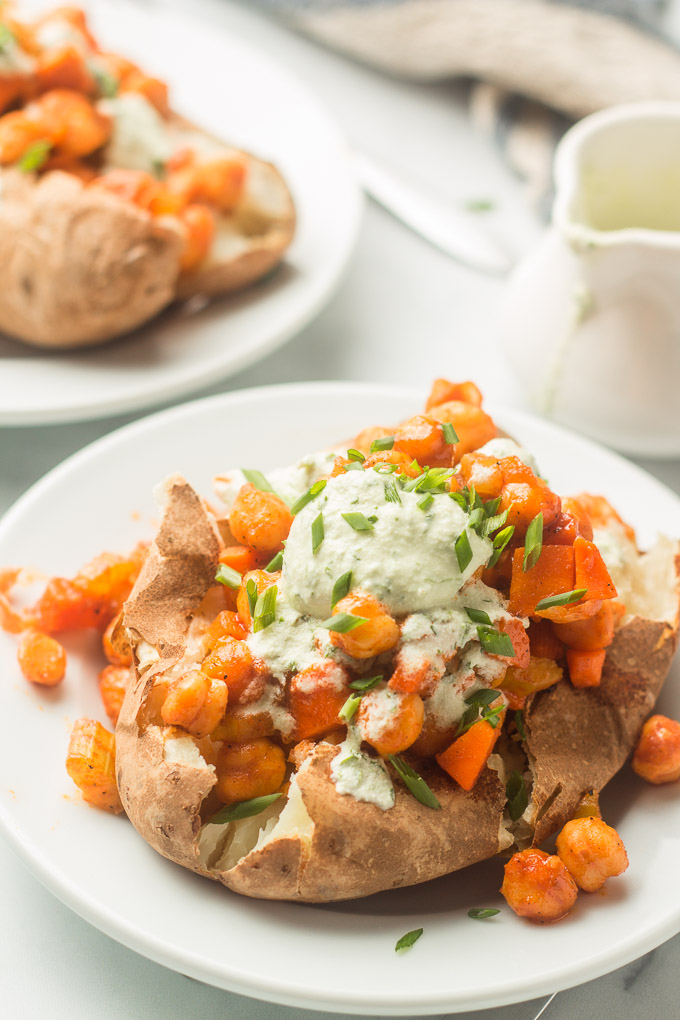 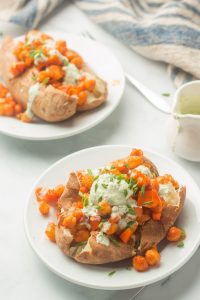